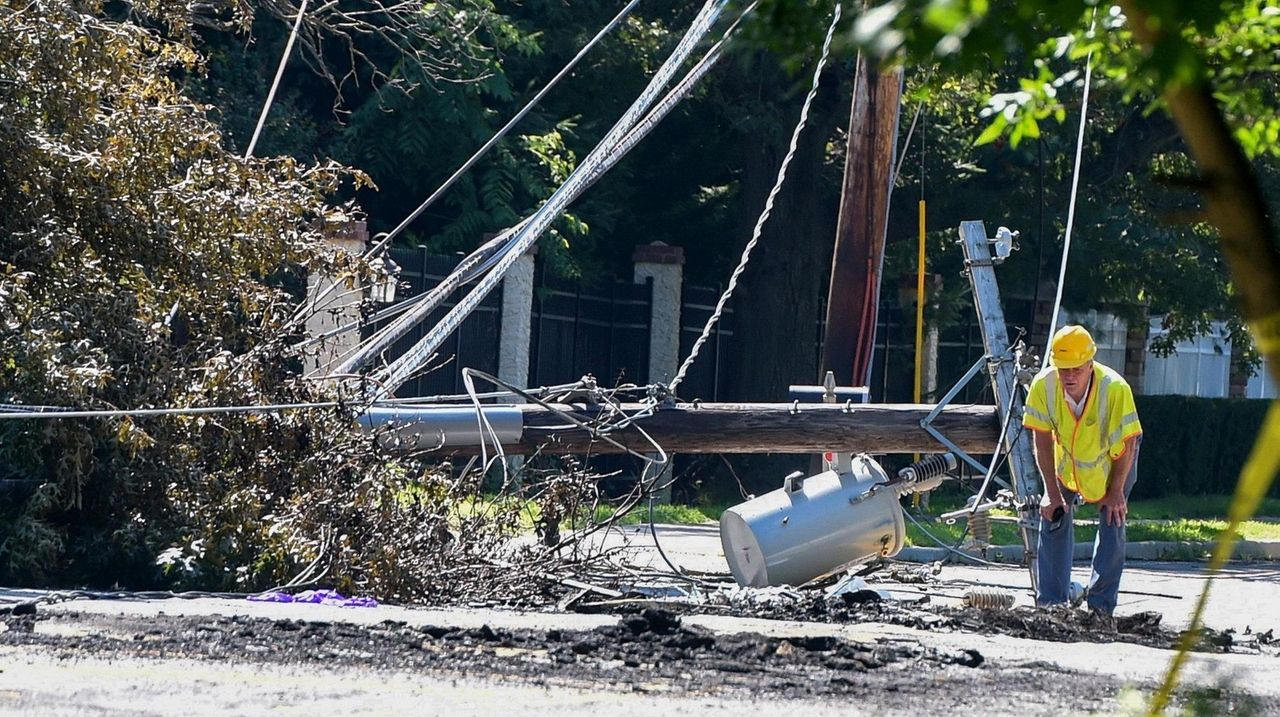 Three women in their 20s — a driver and two passengers — were killed when the sport utility vehicle they were in hit a utility pole and erupted in flames late Monday in Mount Sinai, Suffolk police said.

Witnesses said the 2010 Jeep Liberty was not being driven erratically as it headed north on a straight stretch of Mount Sinai-Coram Road, but suddenly, it slammed into a utility pole, just past Hamlet Drive, about 11 p.m., according to police.

"It was a horrific car accident," said Suffolk police Det. Lt. David Teufel, who spoke near the scene Tuesday afternoon. "For some reason the vehicle left the roadway."

The Jeep overturned and the pole collapsed, covering the SUV in electrical wire, Teufel said, and with electricity arcing, the SUV immediately caught fire.

Firefighters could only watch helplessly a distance away as the vehicle burned because the ground was also electrified, said Mount Sinai Fire Chief Nicholas Beckman.

"The power lines were just arcing everywhere," he said. "We couldn't do anything until the power was off."

Once PSEG Long Island turned off the power, firefighters hosed down the SUV, putting flames out within 10 minutes, Beckman said.

The victims, identified as women ages 23 to 25, were pronounced dead at the scene of the crash. Teufel said police “have a general idea of who” the victims are but were still working on positively identifying the victims using dental records. He said police believe the women were on their way to a friend's house.

The three women were "fantastic friends," said Robert Minunno, who identified himself as the father of a victim, Rebecca Lynn Minunno.

He said his daughter owned the SUV but was not driving at the time. He said he turned over his daughter's dental records to police Tuesday.

"I haven't even been able to identify my daughter through dental records," Minunno said as he tried to keep back sobs. "You can imagine how sad that must be right at this moment. Right now, it's just so raw … I can't even go see her … to identify her. I've been going through my waves of shock."

Teufel said if the vehicle had been right side up, the rubber tires would have grounded the SUV, perhaps preventing a fire, but the SUV had overturned on its roof.

A retired FDNY firefighter, who was in one of the vehicles behind the SUV, tried in vain to rescue the three young women, but was pushed back by the flames , the detective lieutenant said.

“He attempted everything he could possibly do, but was tragically unable to help,” Teufel said.

Investigators are still working to determine the cause of the crash, including looking for video surveillance, he said, but witnesses told police the Jeep did not appear to be speeding.