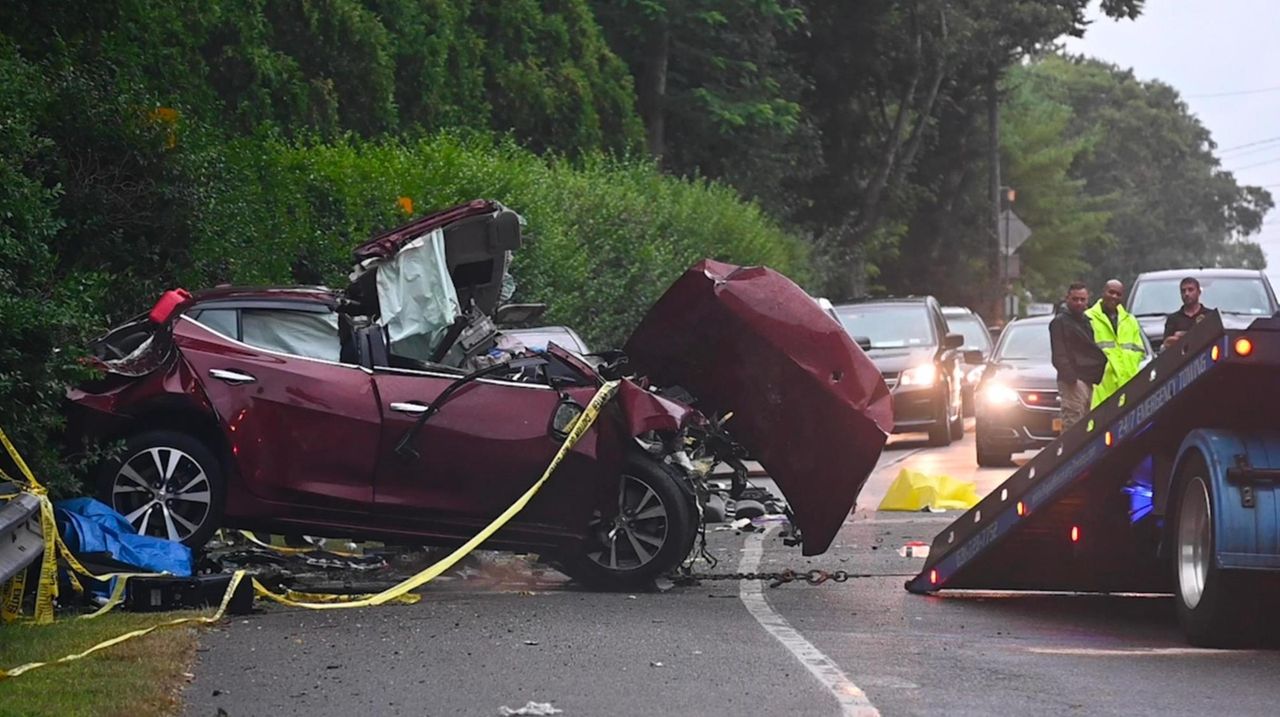 Driver Justin B. Mendez had reached about 106 mph just 3½ seconds before his car slammed head-on into a packed Uber rounding a corner this summer, killing himself and four others, police said on Friday. Newsday's Steve Langford reports. Credit: Kendall Rodriguez, James Carbone

A driver’s speed had reached approximately 106 mph just 3½ seconds before his car slammed head-on into a packed Uber rounding a corner in Quogue this summer, killing himself and four others, the village police said Friday.

His speed at impact was 86 mph "with no indication of braking," the police said in a news release, near a stretch of Montauk Highway where the limit is 40 mph and the "suggested" speed for the curve is 30 mph. The other vehicle, a Toyota Prius, was being driven 27 mph at the time of impact, down from 38 mph before the driver started braking, police said.

The conclusions about how fast the drivers were traveling, by the State Police, are based on forensic analyses of "black box" event-data recorders in the vehicles, the release said.

The crash happened July 24 about 11:15 p.m. as the speeding car, a red Nissan Maxima, was being driven west by Justin B. Mendez, 22, of Shirley, and struck the eastbound Uber.

Just moments earlier, a police officer, whose name has not been released, had tried to stop Mendez and briefly activated the patrol car's flashing lights after clocking Mendez driving west at a speed that was at least 55 mph, Police Chief Christopher B. Isola said in the days after the crash.

Also killed in the crash were Farhan Zahid, 32, of Bay Shore, the Uber driver and a married father of three, along with three of his passengers: Michael O. Farrell, 20; his brother, James P. Farrell, 25; and a childhood friend, Ryan J. Kiess, 25, all of Manhasset.

A fourth passenger, Brianna M. Maglio, 25, of Garden City, who is a nurse at New York-Presbyterian Hospital in Manhattan and Kiess' girlfriend, was critically injured.

Weeks after the crash, the father of the Farrell brothers filed legal papers that he plans to sue Suffolk County, Quogue and the village’s police department.

The papers blame Suffolk for what they describe as poor road design and a lack of necessary maintenance on a section allegedly known for crashes.

And the papers against Quogue allege that a village police officer precipitated the crash by initiating a pursuit of Mendez and then "failing to timely terminate the pursuit/following of the Mendez vehicle as it became obvious that Mendez was aware that he was being pursued/followed." The risk, the papers say, "was too great and unjustified given the physical location of the pursuit and the time of day."

The police news release quotes an eastbound driver that night who told officers he saw a car without lights on "and was completely blacked out."

"When this vehicle passed me, it appeared as if the vehicle was traveling at over 100 miles per hour, which sounded like a race car, taking my breath away. Next, I saw a police car with the emergency lights on around 100 yards or 10‐15 seconds behind the red car, with the police car not making any headway of closing the distance between them," the release quoted the witness as saying.

The village police have said there is no criminal investigation because Mendez died in the crash.

Kurt Kiess, the father of Ryan Kiess, questioned in a statement to Newsday whether Mendez "was pushed to such reckless conduct in an attempt to evade the pursuit by the Quogue Police."

He said there remain unanswered questions, including the police officer's top speed and how long any pursuit lasted. Kiess said he is awaiting the release of the crash reconstruction report, as well as any dashcam footage and radio communication.

In its news release, the Quogue police said that the New York State Attorney General’s Office, which probes whether a police officer committed a crime in certain cases when a civilian dies, reviewed the case and "indicated that there was no cause to pursue action against the police officer." The office didn’t return a call and email seeking confirmation.

Asked about any inquiry into how fast the officer was traveling in the moments before the crash, Quogue Mayor Peter Sartorius declined to answer, saying the village would be releasing only what is in the police news release about the crash. He cited the pending litigation in declining to comment.

"That’s all we’re going to say about it, certainly for the time being," he said.

Lt. Daniel Hartman, the Quogue police spokesman, said Saturday that the department would not be disclosing how fast the pursuing officer was going.

The officer who pursued Mendez is still on the job, according to Hartman.

Hartman said the investigation into the crash by a Quogue police detective remains unfinished.

Ryan Kiess and the Farrell brothers played lacrosse at Manhasset High School. Kiess went on to play at the University of Scranton. After graduating, he had recently been promoted at the accounting firm KPMG.

James Farrell went on to play in college at the University of Pennsylvania, where he was a team captain his senior year. Michael Farrell played midfield for Manhasset and attended Villanova University.

Zahid, the Uber driver, was born in Pakistan and moved to the United States five years ago. He lived in Bay Shore with his wife and three children, ages 6, 3 and 16 months.

Last month, Newsday reported that Suffolk had New York State’s most motor-vehicle-related fatalities of any county — 113 killed, according to preliminary figures for 2020 tracked by the Albany-based Institute for Traffic Safety Management and Research.