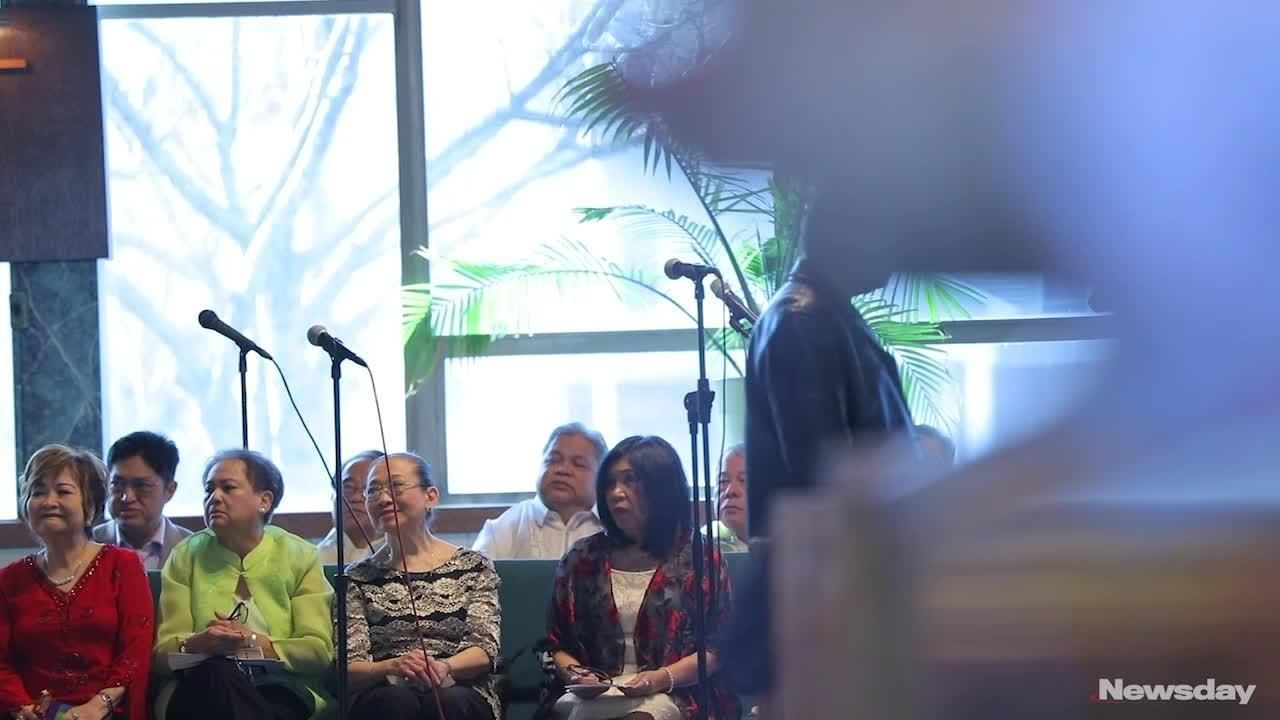 The 35th annual Santo Niño celebration was held at St. Anne's Roman Catholic Church in Brentwood on Sunday, Jan. 21, 2018. Scores of Long Island Filipios took part in the service, which honors the infant baby Jesus, and feast that followed. The religious observance traces its roots to the introduction of Christianity to the Philippines in 1521. (Credit: Newsday / Jeffrey Basinger)

Mac Villapando returned from the altar and cradled his statue of the infant Jesus that was dressed in a sequined red-and-gold robe, crown and a necklace that his wife had picked out on a recent trip to the Philippines last October.

“We thought by having the Santo Niño at our altar, it could be a more complete devotion to Christianity and Jesus Christ,” said Villapando, 65, of Miller Place, who emigrated from the country in 1982 and said he had never brought the statue to a Mass before.

Scores of Long Island Filipino Catholics came together on Sunday to reflect on their religion and share news and stories in their adopted country during the annual worldwide Santo Niño celebrations. The collection of Catholics included those who had moved long ago, and some more recent immigrants, and events such as these serve as an annual reunion for Long Island Filipinos, 16,000 of whom are scattered across Nassau and Suffolk counties, according to U.S. Census data.

Among the attendees was Cristina Senica, 58, a new Sayville resident who moved to Long Island last month after spending most of her life in the Philippines. She had lived in the Cebú province.

“There are a lot of Filipinos right here, right now,” Senica said outside St. Anne’s Roman Catholic Church in Brentwood. “It’s very nice that here, far away from our place in Cebú, we are still celebrating it here.”

The religious observance traces its roots to the introduction of Christianity to the Philippines in 1521.

That year, the Portuguese explorer Ferdinand Magellan had given to the king and queen of Cebú a 12-inch-tall statue of the baby Jesus, dressed in ornate vestments, a crown, and symbols of the Spanish crown.

In 1565, after Spanish conquistadors destroyed Cebú, the statue was said to have remained intact inside a wooden box. Its survival led many to believe that the statue had miracle powers, and, today, it’s stored in a basilica in Cebú.

Susan Guerrero, 61, of Farmingville, co-chairwoman of the Santo Niño Prayer Group of Suffolk that put on the event, reflected on the group’s role in the community.

Guerrero described a “home away from home” feeling among the group’s members during get-togethers. “We’re all here in America. Most of them are here more than 15-20 years and we hardly go home. So we don’t see each other much. So this is the way for us to be like one again — at least once a year.”

The Rev. Lennard Sabio, who led the service, emigrated from the Philippines a decade ago. He reflected on the meaning of tradition and custom, and after the service, appeared gratified to see some of those themes on display.

“Santo Niño is really the child Jesus given to us,” he said. “The one that brings the prince peace, that brings joy to the family, faith, hope and love. And this is what you see — people are coming together as a family.”