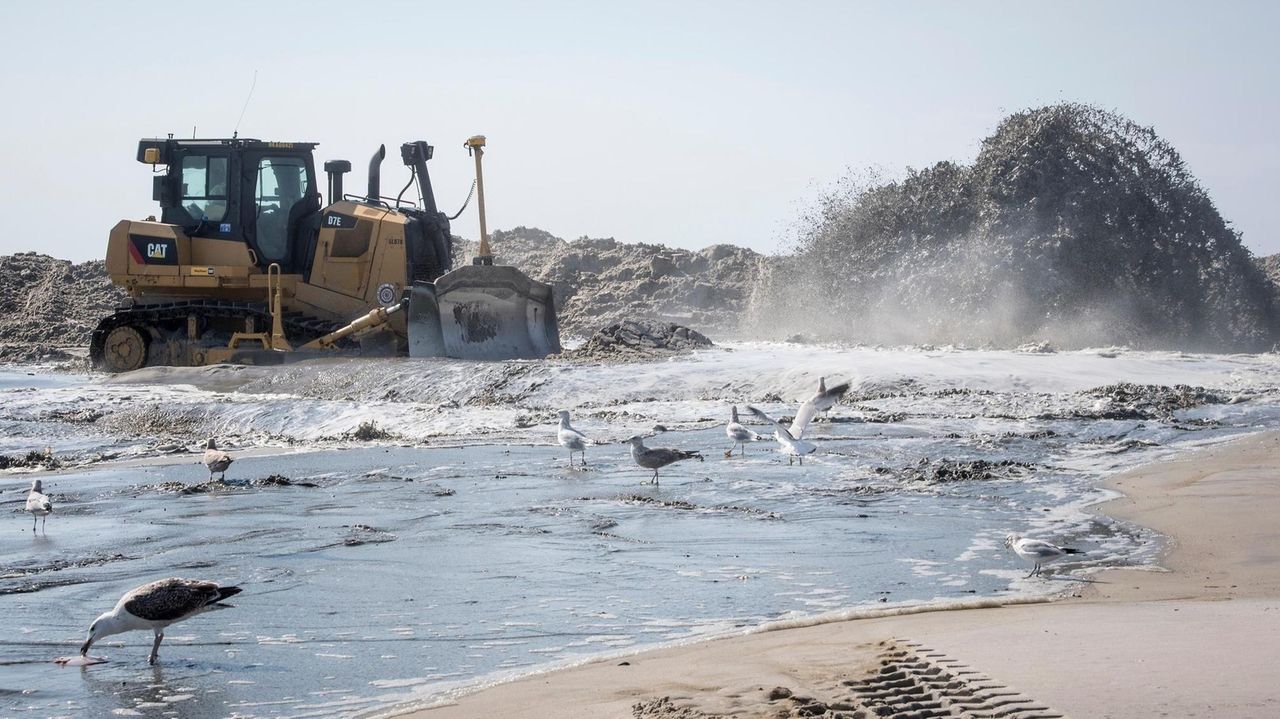 Sen. Chuck Schumer (D-N.Y.), at a news conference in Manhattan Sunday, said the U.S. Army Corps of Engineers was planning to pull crews and dredges from the South Shore of Long Island to work on a nonemergency project near President Donald Trump's Mar-a-Lago resort in Florida. Credit: Charles Eckert

Sen. Chuck Schumer blasted the U.S. Army Corps of Engineers on Sunday for a plan to pull crews and dredges from Long Island so they could work on a nonemergency project near President Donald Trump’s Mar-a-Lago resort in Florida.

Schumer (D-N.Y.) called on the Army Corps of Engineers at a news conference in his Manhattan office to keep the crews and dredging equipment on Long Island’s South Shore, where they are working on two projects to repair beaches damaged by superstorm Sandy in 2012.

The Army Corps of Engineers told Schumer and other officials that its contractor Weeks Marine would return to New York to finish work in Point O’ Woods and Ocean Bay Park in Fire Island, part of the Fire Island to Moriches Inlet Stabilization Project (FIMI), by the June 19 deadline.

“The South Shore of Long Island and the communities on Fire Island still deal with the daily threat that the occurrence of another extreme weather event similar to the scale of Sandy could bring catastrophic levels of devastation,” Schumer wrote Sunday in a letter to Lt. Gen. Todd Semonite, the commanding officer of the corps. “That is why the timely completion of coastal resilience projects like FIMI is imperative and the sudden relocation of these dredges deserves scrutiny.”

A spokeswoman for Rep. Lee Zeldin (R-Shirley), however, said the Army Corps of Engineers told the congressman the Long Island projects could be completed well in advance of the June 19 deadline despite the planned detour to Florida.

The Army Corps of Engineers told local officials earlier this month that Weeks Marine would complete a beach-restoration project in Westhampton by March 9. The company’s two dredges, joined by a third dredge repairing beaches in Monmouth County, New Jersey, will then travel to Florida, where they will be used to restore beaches in Palm Beach near Trump’s Mar-a-Lago resort. The corps said the two dredges from Long Island would then return in April and finish the Point O'Woods and Ocean Bay Park work.

Schumer, the Senate minority leader, said he wants to know who made the decision to move crews and dredges from Long Island to Florida, and why that decision was made.

A spokesman for the corps' New York District did not return a call for comment.

Schumer said the decision to redirect resources and crews repairing damage caused along the South Shore by superstorm Sandy in 2012 is the latest attack on New York State by the Trump administration. He said hundreds of thousands of New Yorkers have been burdened with higher taxes as a result of the $10,000 cap on state and local tax deductions included in the 2017 Tax Cuts and Jobs Act. The Trump administration has stalled progress on the Gateway Program, which would add rail tunnels under the Hudson River, he added.

“When that tunnel [the North River tunnel that was built more than a century ago and was damaged by Sandy] stops functioning, the whole Northeast will come to a standstill,” Schumer said.

Earlier this month, the Trump administration announced that it will ban New Yorkers from enrolling in programs that expedite border crossings, a reaction to a new state law that allows undocumented immigrants living in the country illegally to obtain driver's licenses.

“Everything they do is almost vindictively aimed at New York,” Schumer said of the Trump administration.

In a prepared statement Suffolk County Legis. Bridget Fleming (D-Sag Harbor), said of the plan to move the dredges, "It’s disappointing because leaders across the entire South Shore of Long Island have worked together — across party lines — since the days after Superstorm Sandy to improve resiliency and to protect our critical environment and shoreline."