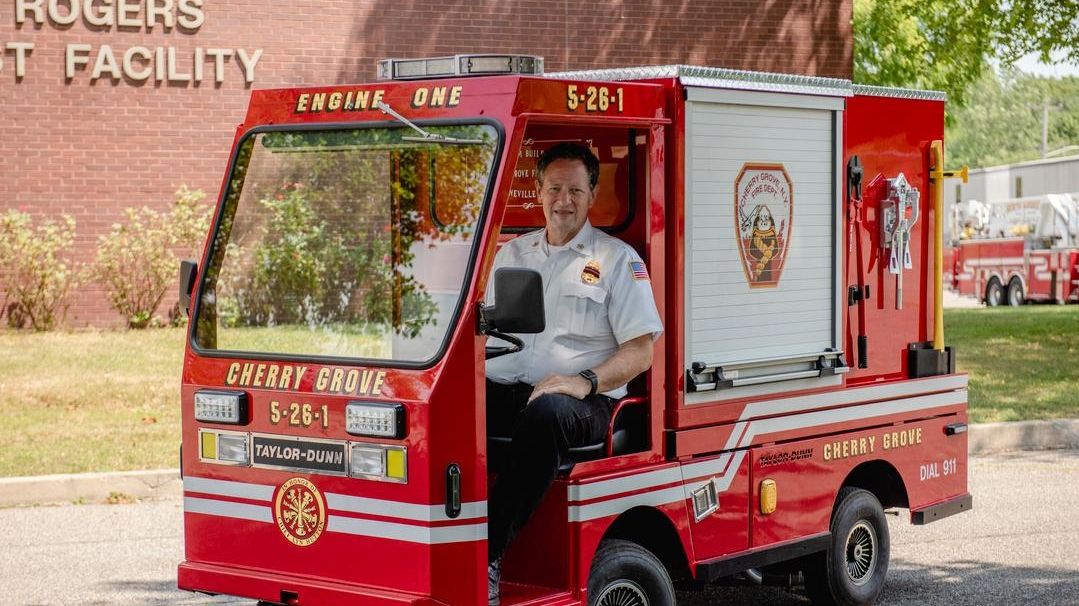 Fire Island’s Cherry Grove Fire Department will name its new fire engine after retired Chief Lyn Hutton, the department’s first female chief and one of just a few in the nation when she was named to the post in 1980. Hutton served until 1994 and remained a training officer for the all-volunteer department until recently. Credit: Johnny Milano

Four decades after Lyn Hutton became the first female fire chief in the Fire Island hamlet of Cherry Grove, she will receive a rare honor: the department’s new, custom-built engine will bear her name.

The vehicle was built not much bigger than a golf cart to fit on the roadless community’s narrow boardwalks and painted red. Hutton’s name will appear in front in gold leaf. It will journey with royal pomp this week from the workshop of Neville Apparatus, a New Hyde Park company that supplies many Long Island fire departments, to sit in repose at Sayville Fire Department for several days. Saturday, with an escort of the Suffolk County Police Department and United States Coast Guard vessels, it will ride a ferry across the Great South Bay to a firefighters’ welcome.

Hutton will not attend because of coronavirus concerns. In a phone interview from her home in Boynton Beach, Florida, she recalled her early years in a department she joined in 1976 and led from 1980 through 1994: overwhelmingly male, serving a mostly male community.

“I was not in a united community when I came in,” she said. “I accepted those guys and in turn they figured out they could accept me.”

Hutton was a phys ed teacher and coach who painted houses in the summers, using gym workouts to build her strength and advanced firefighting training in Yaphank and in Bergen County in New Jersey to build her skills. Sometimes, on the mainland, she attended fires as one might attend audit classes: “I watched strategy, what they were thinking, what they were trying to do,” she recalled.

What she learned she passed on to her firefighters in drills she organized for the department’s unusual hose house system, which stockpiles most firefighting equipment at 18 locations around the community instead of on fire trucks. She also encouraged firefighters to do live fire training in Yaphank.

Fire service has always been a mostly male province: A National Fire Protection Association study based on 2018 data estimated that just 8% of the nation’s 1.1 million professional and volunteer firefighters are women.

Then there is Cherry Grove. Half of the department’s 50 firefighters are women, and since Hutton’s time two women have served as chief.

“A lot of people contributed to this,” Hutton said. But the ex-chief “opened the door, no question, and held it open,” said Esther Newton, the Purchase College anthropologist who interviewed Hutton for her book, “Cherry Grove, Fire Island: Sixty Years in America’s First Gay and Lesbian Town.”

Running the fire department was an important job in an island community whose wood bungalows sit within a spark’s range of each other, but Hutton was highly visible outside the department as well, Newton said. Hutton participated in the first Invasion of the Pines after a bar there would not serve a drag queen; that part-protest, part-gag grew into an annual tradition. Hutton and her partner also ran a popular Grove restaurant, Top of the Bay, for years.

“She had a lot of working-class skills,” Newton said. “She was inventive and creative. She was top dog out there.”

Rochelle Jones, the FDNY’s first female battalion chief, met Hutton through a group, Fire Service Women of New York, that runs annual trainings for women in the service and a camp to introduce young women to the work.

“Society has changed and accepted women in many more roles, but also seeing women doing the job makes it something obtainable,” said Jones, now retired. “Sometimes you need to see something to believe in it.”

Jill Navarra and Diana DiPrima, the two women who followed Hutton as chief, spoke of her reverently. Navarra recalled a “powerful, confident, strong” leader. DiPrima said she remembered the thrill as a young firefighter when Hutton asked her to hang on to her radio when she went off-island: “It was this symbol of authority, and she asked me to use it.”

“Keep at it,” she’d said. “Keep training, because at 3 in the morning, muscle memory kicks in.”

The Cherry Grove Fire Department's fire engine named after former chief Lyn Hutton is gas-powered, has a pumping capacity of 500 gallons per minute and cost approximately $160,000.

Teens speak up about Riverhead's marijuana sales plans
Judge stays release of Levy pact until at least Aug. 2
Grieving wife's dilemma: How to tell her children their dad is gone
2:10
Mayor: All NYC employees, including NYPD, must be COVID vaccinated or test weekly
Searchers: No weekend bull sightings, but he likely hasn't left the area
Jones Beach lifeguard reports being bitten by shark
Didn’t find what you were looking for?