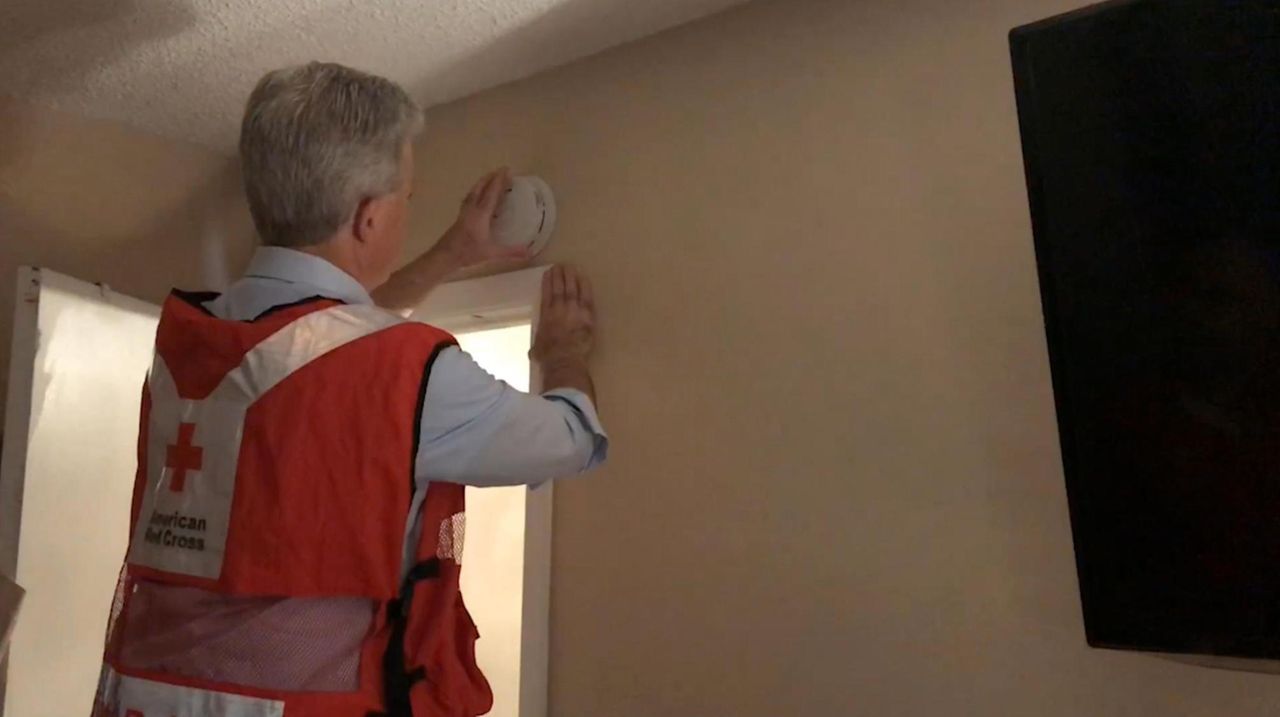 Suffolk County Executive Steve Bellone helps replace a smoke detector at the home of Michele and Helen Sciaulino in Holbrook on Friday, as part of the Red Cross’ “Sound the Alarm” campaign. Credit: Newsday / Antonio Planas

The American Red Cross is fanning out across Long Island and installing free smoke detectors in homes, hoping to save lives by preventing fire deaths like those in New York City last week.

“Two days ago, we had that very significant fatal fire in the Greater New York region in Harlem," said Neela Lockel, CEO of the American Red Cross Long Island. "This morning, there was another fatal fire in New York City. It just reinforces how important this program is.”

Lockel spoke Friday from the Holbrook home of Michele and Helen Sciaulino as part of the Red Cross’ “Sound the Alarm” campaign. Suffolk County Executive Steve Bellone also was at the home, spreading the word about the importance of smoke detectors and completing an installation.

Bellone helped replace two smoke detectors at their home with four. Each device came equipped with a 10-year battery life.

Since May 5, the American Red Cross has been giving out the smoke detectors and hopes to distribute at least 1,500 of them on Long Island over a two-week period, Lockel said. At the Holbrook condo where Michele Sciaulino lives with her mother and their pets, Lockel spoke with the women and gave safety tips in case a blaze does happen.

“You have two minutes to get out. Your biggest priority is yourselves,” Lockel told the Sciaulinos as they sat at the kitchen table with their mixed-breed dog Lacey — who also listened attentively as she sat on Helen Sciaulino’s lap.

Helen Sciaulino said she learned of the Red Cross’ program through a senior citizen group at her church. Her daughter said the new detectors provide a sense of security.

“It’s definitely a benefit the Red Cross offered to us," Michele Sciaulino said. "I think people should take advantage of it. It could save your life — that’s for sure.”

Last Wednesday, a family of six was killed in Harlem, including four children ages 3 to 11, in what authorities said was an accidental stove fire. Officials had said no smoke alarm was recovered. On Friday, an elderly woman was found dead when firefighters responded to the third floor of a building on the Upper East Side, officials said.

At the Sciaulinos' condo, Bellone used a step stool and a power tool to install multiple smoke detectors.

“We always think of the Red Cross at times of tragedy for families and how they respond and help,” Bellone said. “But this is really about the Red Cross preventing those tragedies from ever happening in the first place.”