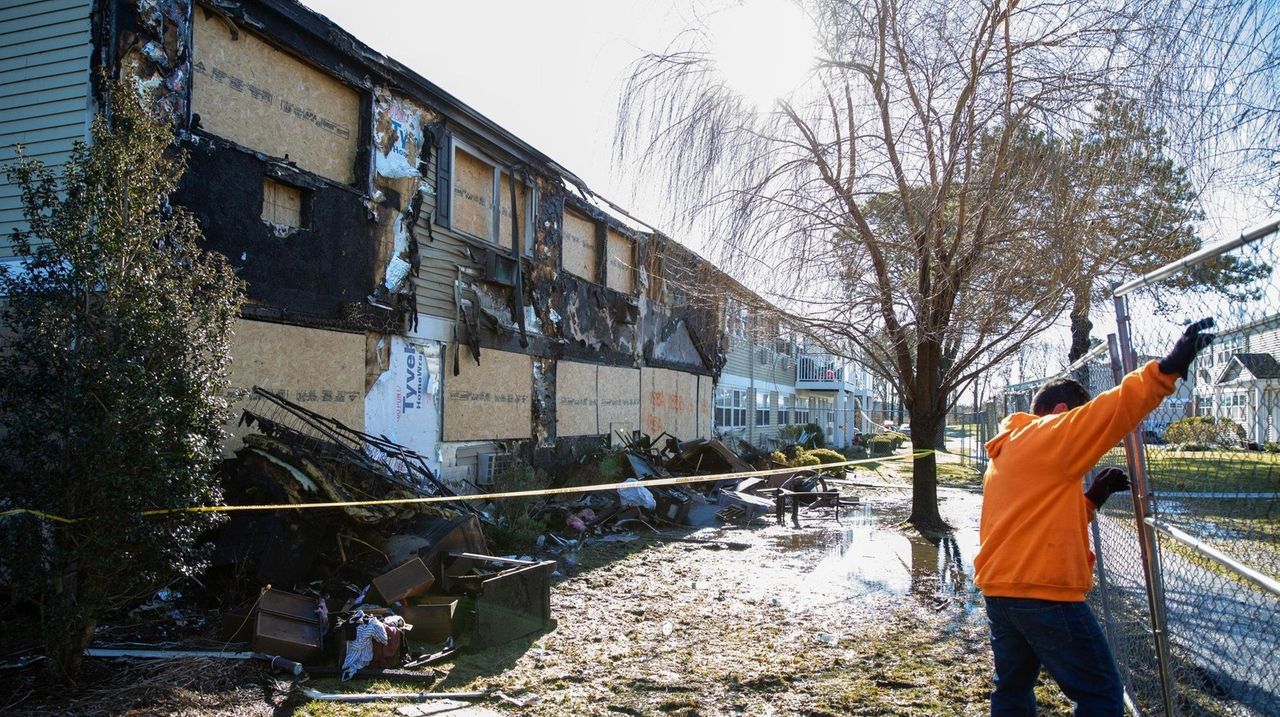 Charles Schortemeyer of Ronkonkoma, who lives in a neighboring apartment building to the one that caught fire on New Year's Day, spoke Saturday about how fast the fire took it over. Credit: Morgan Campbell

Fire repair crews boarded up windows and installed a temporary roof at a Ronkonkoma apartment building Saturday after a New Year Day’s fire damaged 16 apartments and displaced the families who live there.

Crews used plywood to cover the charred half of the building at Colony Park apartments at 500 Peconic St. after the morning blaze gutted eight apartments and damaged eight neighboring units.

No injuries were reported from the fire that burned for about an hour. Fire officials stated Saturday the cause of the fire remained under investigation.

The ground Saturday was still soaked from hose lines and rain the day before while some residents sifted through the ashes searching for any remaining belongings.

Residents declined to comment as they flipped over a charred box spring and mattress. Nearby was a blackened Pac-Man arcade game and bicycles pulled from the blaze while Christmas stickers clung to the still-standing windows.

Charles Schortemeyer, who lives in a neighboring apartment building, said the fire sent residents scattering while pets were kept in the apartment community center.

"It went up quick. Within two minutes, it was engulfed," he said. "It’s very sad. People couldn’t believe how fast it went."

Schortemeyer, 53, said he planned to buy a fire extinguisher for his apartment, noting that Friday's blaze came after a fire at another apartment building in the complex nearly two years ago.

Jenna Schlick was one of those who lived in that building when the fire began late at night in March of 2019.

With the fire blocking the building's front door, Schlick was forced to drop her then-20-month-old daughter from a second-floor balcony into the arms of her husband on the ground. Schlick and another man were treated for minor injuries.

After the fire, the Schlick family lived in a hotel for about six months before settling in an apartment complex in Bohemia.

"The feeling of being displaced and losing everything — the aftermath of that is just terrible," the 31-year-old mother said in a phone interview Friday. "I can only feel for those people, especially during COVID now where the world is not the safest place. You will have to worry about where you are going to live and having to go out and buy new things down to just even a toothbrush."

Apartment management declined to comment Saturday. The complex is operated by the Commack-based Heatherwood Luxury Rentals, whose office did not return a call Saturday seeking comment.

Joe Gentile, the owner of the disaster repair company PCI Services which helped board up the building and erect a temporary fence, said eight of the units were a total loss and eight units on the other side of a cinder block firewall were salvageable.

Gentile said he met with the fire officials on Friday and he said they believed a microwave possibly ignited the blaze.

"This half of the building was pretty badly burned while the other half could be rehabilitated and residents could someday return," Gentile said.

Michael de Vulpillieres, communications officer at American Red Cross on Long Island, said Friday that the humanitarian organization connected with 10 families, two of which declined assistance. The remaining six families were not on scene.

Relief workers were helping eight families, including 14 adults and 13 children, he said.