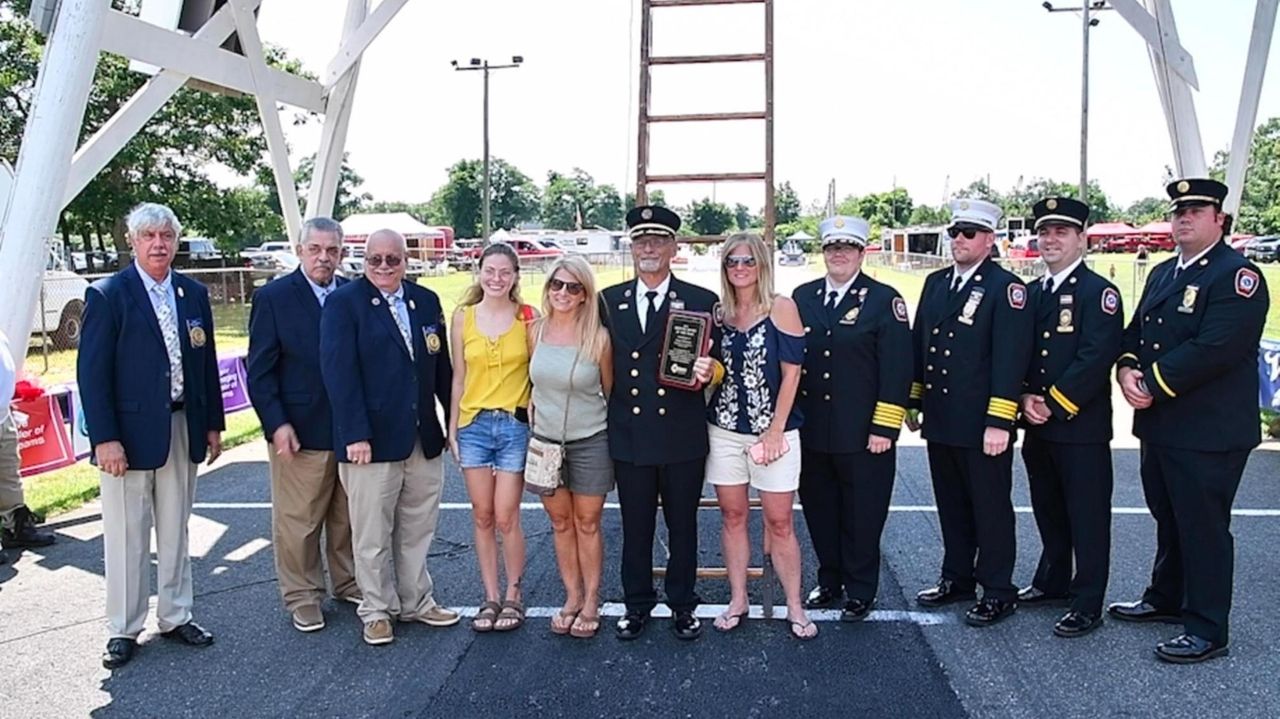 At a ceremony in East Patchogue on Saturday, Louis Valentino, a member of the Hagerman Fire Department for 57 years, was presented the "Youth Mentor of the Year" award from the Firemen's Association of the State of New York. Credit: Newsday / John Conrad Williams Jr.

A longtime Long Island firefighter who has spent decades mentoring teens and local youths who eventually became firefighters themselves was recognized for his efforts Saturday at a ceremony in East Patchogue.

Louis Valentino, 76, a member of the Hagerman Fire Department for 57 years, was presented the "Youth Mentor of the Year" award from the Firemen’s Association of the State of New York, a statewide agency that educates and trains volunteer firefighters.

Valentino spearheaded an Explorer program with the Boy Scouts for the Hagerman Fire Department. The program teaches kids firefighting activities; Valentino also served as a mentor for participating youths, many of whom eventually joined the fire department, according to Hagerman and FASNY officials.

Valentino, who grew up in Brooklyn and joined the department in his late teens, told Newsday it was hard to put into words how much he loved being a mentor for future firefighters.

"It’s just such a great honor to have kids that you know maybe wouldn’t go in the right direction, that I helped to keep here, and they go on to become chiefs and captains of the fire department," said Valentino, of East Patchogue.

"It’s the respect that you get from them and the family that I made with the department … I can’t explain how lovely they treat me and the respect I get from everybody. That’s what keeps me going," he said.

John Ciambra, 30, a captain with the Hagerman Fire Department, said Valentino mentored him when he was 9, teaching him how to stay cool under pressure when training for drill team competitions.

"You want everything to be perfect, but not everything is perfect in the fire service. … Louis is very good at doing different things in different ways to make it work," said Ciambra, whose younger brother, Anthony Ciambra, 15, also trains with Valentino as part of the Explorer program and the junior drill team.

Tim Dunham, 32, a first assistant chief with the department, trained with Valentino as a teenager for drill team competitions.

"It’s beyond imaginable to think what he’s done for not just myself and other officers, but the kids growing up in this place," Dunham said. "They get on the right track, they find good jobs, they stay off the streets, no bad kids, and they find that there’s something here to do … and now it’s our job to keep Louis’ passion and tradition going. We’re the next ones who are going to keep teaching these kids on and on."