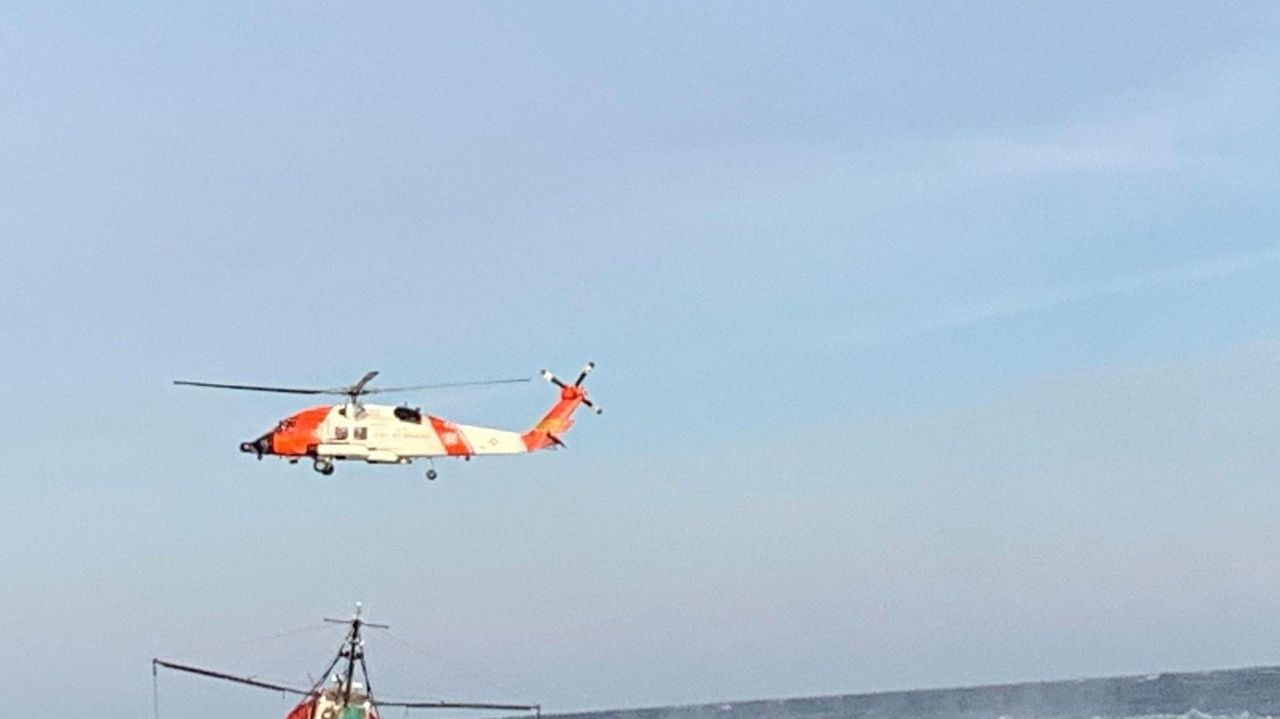 The New Age began taking water as the crew headed to New Jersey to unload its catch. Credit: Caelan Harshaw

Mike Havens was asleep in the galley of the Montauk fishing trawler New Age, around 20 miles south of Fire Island Inlet, when a mate woke him with a line that is every fisherman’s nightmare.

“Mike, the boat is sinking,” he was told.

It was shortly before 3:45 a.m. on Feb. 12, and the three-man crew had fished for fluke most of the previous day. They packed more than 1,500 pounds of fish in the hold until 10 p.m. and were steaming to New Jersey to unload their catch. Now, the sky was black, the wind was up around 30 knots and swells were level with the stern, a sign of trouble. Deck lights lit the scene phosphorescent white.

When Havens, 49, of Amagansett, reached the deck, he noticed the stern of the vessel was level with the sea and taking on water. “It was rough,” he said. “The wind come up early in the morning,” and swells were pounding the steel boat, a bright-red 45-foot trawler with a high bow that bore a wrinkle.

Sensing a problem with the boat’s onboard water pumps, Captain Billy Carman, 32, yelled to Havens to retrieve a gas-powered pump to remove water from a below-deck compartment at the rear of the boat. But Havens quickly realized a vital coupling needed to attach a hose to the pump was missing. “I ripped apart the top two bunks trying to find it,” to no avail, Havens said.

By then the water had crept even farther up the stern, nearly to the fish hold hatch, and was continuing to rise. Carman radioed for the Coast Guard at 4:05 a.m., he said. The men donned red insulated survival suits, readied a life raft, and clung to the ship waiting for help. Carman had shot off a flare.

“We almost rolled over three times,” said Havens, noting the boat was listing badly to one side while moving on autopilot into the swells. “We were all on the side of the boat" when he saw the plane, he said, a Coast Guard craft that tipped its wings to let the men know it had seen them.  Two Coast Guard ships and a helicopter were on the way for an operation that ultimately involved equipment from four states.

Caelan Harshaw, petty officer first class of Coast Guard Station Fire Island, was at the wheel of the first boat to spot the New Age, picking up its lights from two miles away.

“The fishing vessel was in pretty bad shape,” Harshaw said. “It was taking water over the railings on the stern. The water would rush up toward the pilot house where three crew members were huddled together in survival suits.”

Carman kept in radio contact with the Coast Guard, reporting that another crew member, Mitchell Lester, had injured a rib in a fall. Harshaw said a decision was made to take him off the boat, and Lester jumped into the sea and was rescued.

“The two others were adamant they were going to stay,” Harshaw said of Carman and Havens, who still believed they could salvage the boat and requested a pump from the Coast Guard.

But their hope was short-lived. Within minutes, a 10-foot swell hit the boat and sent it “nearly vertical,” Harshaw said. “I had one of my members yell at them to get off the boat right now. That the boat was super unstable.”

Havens, noting that Carman was soaking wet beneath his survival suit after dousing in frigid seas, recommended the captain jump in first. Harshaw was able to maneuver the 45-foot response boat to within a range so that crew members were able to pluck them from the water.

Lester’s condition was considered serious enough that he was transported by helicopter back to shore for hospitalization. Harshaw said it took just seven minutes from the time he informed the plane of the plan to Lester being lifted from the boat. Despite the wind and seas, he said, “It was probably the smoothest basket hoist I’ve ever done, even in those conditions.”

With the New Age still running on auto-pilot, Harshaw requested permission to take the other two crew members back to Fire Island. He said he was “fairly surprised” the boat hadn’t sunk. But winds began to calm and the New Age’s engines quit. “I thought as we were leaving that one or two more big waves like that would take it” under.

But the New Age survived.

Owner Chris Winkler, who had been visiting family on the West Coast, returned that afternoon and boarded his brother-in-law's boat with pumps to save the New Age. Winkler said it appeared a combination of small leaks, the timing of turning on water pumps and imbalanced fuel and ice load may have contributed to the problems. Carman denied imbalance caused any problems.

But Winkler also criticized fishing regulations as a contributor. "These guys almost lost their lives because they had to steam 19 hours just to make a day's pay because New York's quotas are so much lower than New Jersey's," he said. The New Age was back in Montauk by last Wednesday.

Carman said he’s seen a lot in his decades of fishing, but his experience on the New Age was a topper. “I’ve been 250 miles offshore with [storm] winds,” he said, “but I’ve never had a scenario this bad, ever.”

NYC primary errors revive concern over election system
Teens speak up about Riverhead's marijuana sales plans
Jones Beach lifeguard reports being bitten by shark
Searchers: No weekend bull sightings, but he likely hasn't left the area
2:10
Mayor: All NYC employees, including NYPD, must be COVID vaccinated or test weekly
Officials: 4 separate car crashes within 2 hours in North Babylon
Didn’t find what you were looking for?