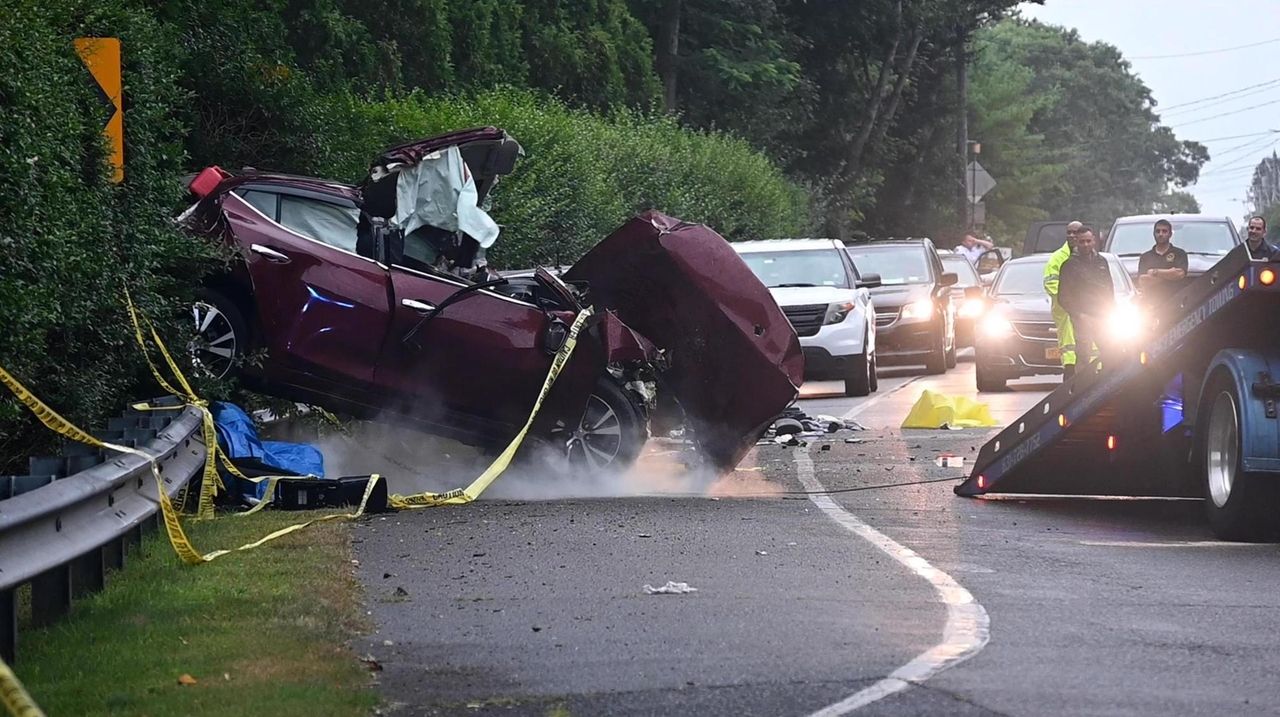 This story was reported by Vera Chinese, Dandan Zou, Gregg Sarra and James Carbone. It was written by Chinese and Zou.

Investigators are trying to determine if excessive speed was a cause of a devastating collision that killed five people late Saturday in Quogue, including two brothers, their friend and both drivers.

Farhan Zahid, 32, of Bay Shore was driving the Toyota Prius that was struck by a Nissan Maxima driven by Justin B. Mendez, 22, of Brookhaven, police said. Both were killed in the crash. Police said the Maxima crossed the centerline and collided with the Prius.

Police said that just after 11:15 p.m., the Maxima, traveling west on Montauk Highway near Quogue Street, left its lane and hit the eastbound Prius head-on.

Investigators believe excessive speed on the part of the Maxima may have been a factor in the crash, police said. Neither driver’s family could be located Sunday.

Kiess and James Farrell were classmates from elementary school to high school and played lacrosse together, Ryan’ parents, Kurt and Nina Kiess, said.

"Gentle heart, gentle giant," Kurt Kiess said of his middle child, who stood 6-foot-3, choking up as he spoke. "He died with two of his friends. … He loved Brianna. He loved his family, friends and the community. "

Kiess and Maglio met at the University of Scranton, where they played lacrosse, the Kiesses said. The two had been dating for six years. Kiess was recently promoted at the accounting firm KPMG. Maglio is a nurse at NewYork-Presbyterian Hospital in Manhattan.

The parents said their son and his friends took an Uber around 10:30 p.m. to go somewhere to dance.

"It’s surreal. I’m in shock still. You never want your children to predecease you," Nina Kiess said. "It breaks our heart. We see this happen on TV. … Then all of a sudden, boom, you have it happen to you. It’s like a nightmare. It’s a nightmare."

The adjectives Nina Kiess used to describe her son was good-hearted, respectful and loyal.

"He’s definitely mature beyond his years," the mother said. "He was a kind, gentle soul who always stood up for his friends or the underdog."

And Maglio is "the best, fun-loving, sweetest, young, beautiful, respectful, loyal [person with] a lot of energy," she said. "Always smiling. Her smile would light up a room."

The Farrell family could not be reached Sunday.

Bill Cherry, who coached boys lacrosse at Manhasset High School from 2007 until retiring in 2016, said Kiess and both of the Farrells were more than just star athletes.

"I coached all three of them over the years and it’s just unbelievable," Cherry said. "These were great kids, three-sport athletes, who played football, basketball and lacrosse ... This is so senseless, so heartbreaking."

James Farrell played the midfield for Manhasset and went on to play in college at the University of Pennsylvania, where he was a team captain his senior year.

"He was a team-first kind of guy," Cherry said.

James Farrell was the captain of the Manhasset team in 2014, Cherry said. He lettered in football and lacrosse, and was an All-Nassau and All-Academic player who also sang in the chorus, Cherry said.

"It feels like yesterday that James Farrell was jumping on the fence after winning the Nassau boys lacrosse championship," said Manhasset’s Mark Giardino, a physical education teacher at the high school, who also coached Farrell in junior varsity basketball. "I keep thinking about that moment all day today, how happy he was, how full of life."

"He was a kid everyone loved being around," said current Manhasset boys lacrosse coach Keith Cromwell. "I was down on the lacrosse fields in Delaware on the club circuit when I heard the devastating news."

Michael Farrell graduated in 2019 and went to Villanova University, the coach said.

"Michael was such a happy-go-lucky kid and a tough lacrosse player," Cromwell added. "He was a pleasure to coach."

Ryan Kiess played defense at Manhasset and went on to play at the University of Scranton.

"He was a leader on the defense," Cherry said. "He was a physical, aggressive leader out there."

"Our community is absolutely heartbroken," Schlanger said. "Ryan, James and Michael were very, very special. These two families are beloved in this community. We are devastated."

Quogue Village Police Chief Christopher Isola told Newsday he did not believe the curve on Montauk Highway near the intersection was any more or less dangerous than other bends in the town.

He noted the village officers are aggressive in speed enforcement throughout Quogue, including along that portion of Montauk Highway where the speed limit is 40 mph.

"Every turn along Montauk Highway in the Town of Southampton is dangerous," he said.

State Police are assisting with accident reconstruction, Isola said. "It was a horrific scene for everybody," he said.

He said it was too early to say if drugs or alcohol were a factor. "Any accident like this we look at it aggressively and look to rule it out first," Isola said.

Donna Odom, who has lived near the scene of the crash her entire life, said she hadn’t seen an accident at the intersection in more than 20 years.

This one was especially tragic, she said.

"When I got up this morning it took my breath away," she said. "It’s every parent’s nightmare."

Quogue resident Joseph Dicarlo said he was inside his home when the sound of a collision jolted him to attention.

"I was sitting on my bed with the windows shut in the house with the air conditioning on low and I heard a huge crash," Dicarlo said. "From what I heard it sounded like a train was hitting a bus doing like 100 miles per hour."

Both directions of Montauk Highway in the area of the crash reopened Sunday morning after being closed for several hours overnight.

Cherry, the three men's former coach, said the Saturday crash was "so senseless, so heartbreaking."