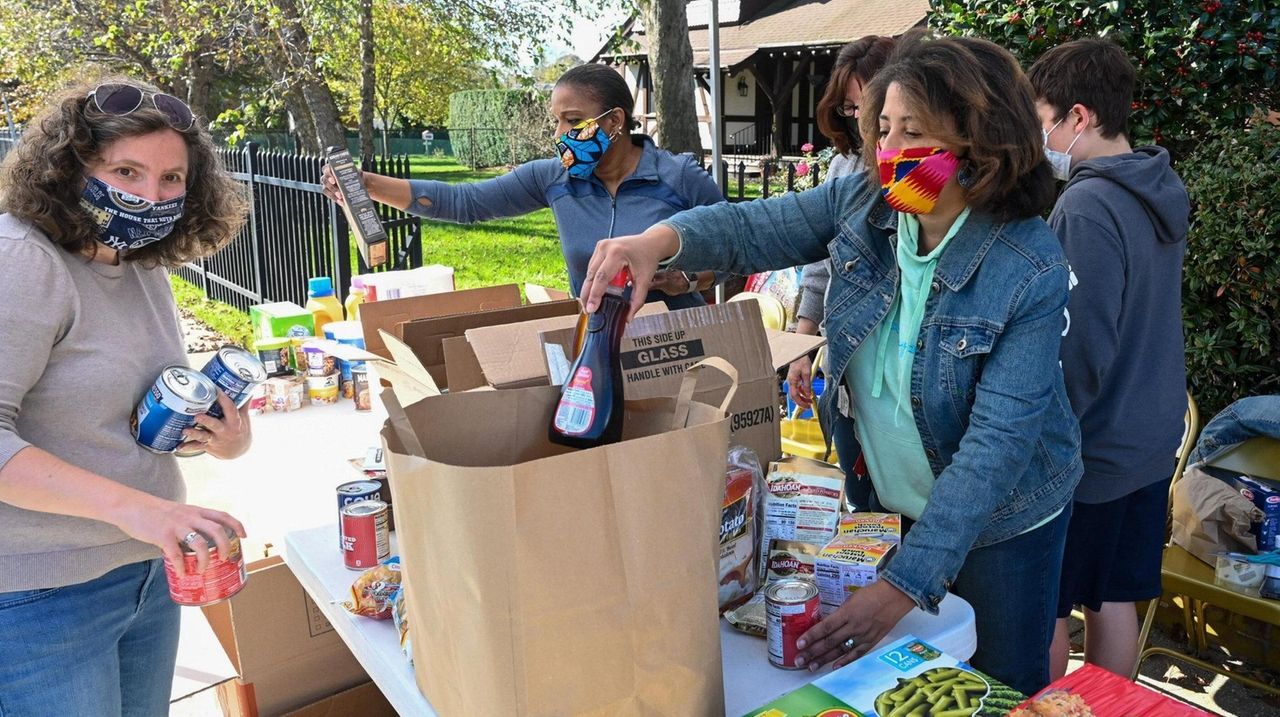 Volunteers sorted through donated food in front of St. Mark's Episcopal Church in Islip on Saturday. The food will be distributed to organizations that distribute to food pantries throughout Suffolk County. Credit: James Carbone

Long Island food banks are stocking up for the holidays to distribute holiday meals in a year where many families are already struggling through the COVID-19 pandemic.

Long Island Cares, one of Long Island’s food banks, distributed more than 53,000 pounds of food Saturday at its warehouse in Hauppauge, including more than 1,300 turkeys, 10,000 pounds of potatoes and 11,000 boxes of Thanksgiving fixings to 33 food pantries on Long Island.

Long Island Cares CEO Paule Pachter said the food bank expects to deliver 12,000 turkeys this holiday season, which is slightly less than past years because fewer families are traveling and gathering for the holidays due to COVID-19 restrictions.

"You can’t distinguish greater need during the holidays. Year after year, the community awareness of food insecurity becomes more urgent around the holiday season, people looking for an opportunity to do something," Pachter said. "Giving away 50,000 pounds of food is going to provide 42,000 meals for people. It’s meeting the needs for agencies working for families who are having a hard time bringing their own food to the table."

Long Island Cares have served 179,000 people through October, including 116,000 people who have requested food for the first time since March. He said they have seen more than a 434% increase in demand for food across Long Island since the pandemic began.

The church holds monthly food drives and donates food to the God’s Provisions organization, which delivers food to food pantries throughout Suffolk County.

"We don’t want the holidays to be insecure for anyone. It’s a time of giving and feeling gratitude," St. Marks organizer Irene Ross said. "We take for granted if we’re hungry, we can go to the refrigerator."

More than 50 residents dropped off deliveries of food and packages purchased in bulk at the church Saturday morning.

Catherine Debramo, 71, of East Islip, said both she and her husband were diagnosed with COVID-19 in April and he died from the disease.

"He was here one day and seven days later, he was gone," Debramo said. "I have so much and I want to give it away to other people who need it. So many people are hurting without jobs and don’t have money to eat during these hard times."