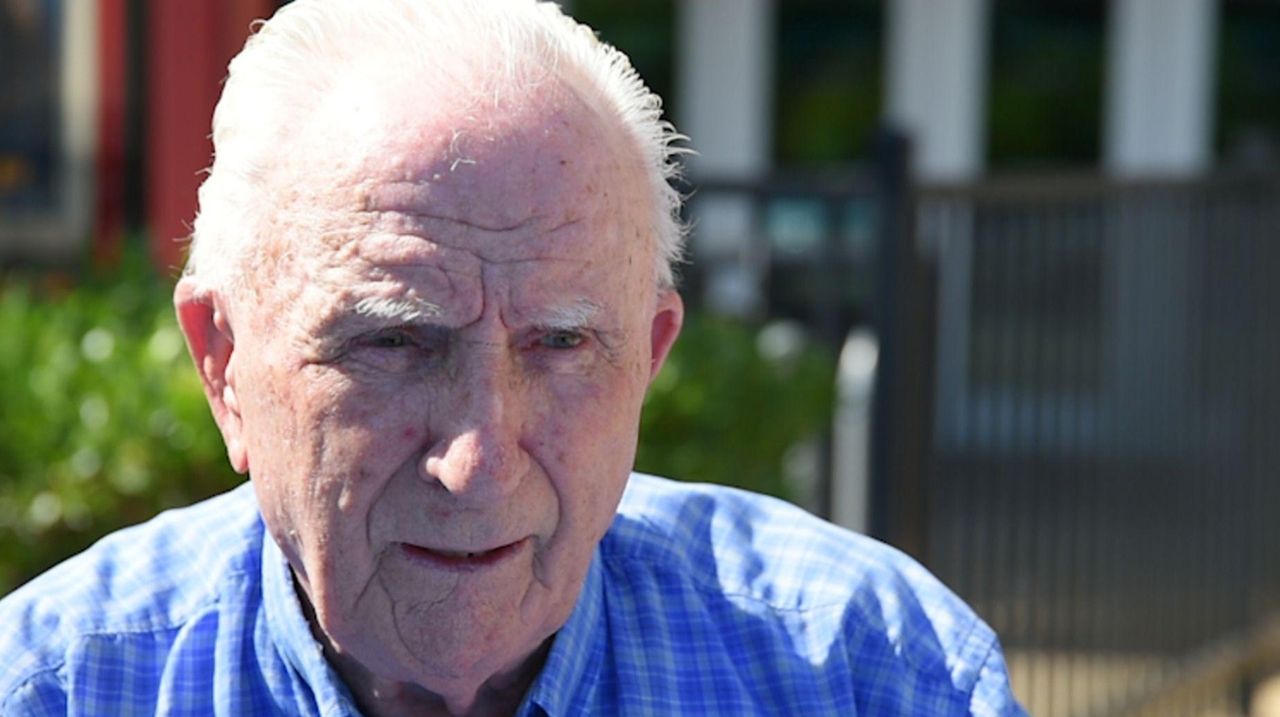 On Wednesday, July 26, 2017 Cyril Tozer of Ridge, a British Army WWII vet who fought at Dunkirk, went to see the film, "Dunkirk." Afterward, he reflected on his wartime experience and how the movie brought emotional memories back. Credit: Newsday / Thomas Ferrara

There is a moment in the newly released film “Dunkirk” when a British officer peers out at a ragtag flotilla of civilian boats approaching where he stands at the water’s edge on a beach in the north of France.

A single word slips from his lips.

That’s the moment when the first tear fell for Cyril Tozer, who watched the film in a theater in Holtsville on Wednesday.

Tozer, who was born in England, had been on Dunkirk’s wide beach in June 1940, when the fate of World War II hung in the balance.

Then a 17-year-old British soldier, Tozer had been among the more than 350,000 British and French troops who had been routed by Hitler’s Nazi army in May 1940, and had fled through France to the beaches outside of Dunkirk.

Caught between the water’s edge and Hitler’s advancing troops, their only hope was an evacuation across the English Channel. Failure meant capture, and likely a quick end to World War II.

But Nazi planes and submarines made a military-only evacuation almost impossible.

“We were getting strafed and bombed all the time, and I didn’t know if we would make it,” said Tozer, who arrived at Dunkirk on May 31, 1940, his rifle long ago buried and his military helmet discarded in the headlong retreat.

So British civilians, called to the defense of their island home by British Prime Minister Winston Churchill, came sailing to the rescue. For days, they braved the channel’s 40-mile-wide waters and buzzing German aircraft in anything they could commandeer — motor yachts, fishing trawlers, even family sailboats. In all, some 400 civilian boats participated in the massive evacuation by May 31, the day Tozer reached the shore.

But there was no room for him that day, or the next, or even the morning of the next. With each departing vessel, he recalled as the lights went up after the movie’s end, he saw his chance of avoiding death or capture recede toward the gray horizon.

“Guys were pretty up tight,” he said. “They were worried.”

His brother and father were also in the military, and he didn’t know where they were. His mother, who wore her hair in flowing brown locks, and who by the end of European combat had received seven casualty notice telegrams notifying her that one of hers had been wounded, would be white-haired by the time the war ended.

“England went through a lot,” said Tozer, recalling the devastating bomb attacks that leveled much of London later in the war. “We had a 9/11 almost every night.”

He finally made it onto a civilian craft on June 2, 1940, wading into the chest deep surf and clambering aboard. He recalled crowds of well-wishers greeting him and fellow troops as they landed at Ramsgate, England.

He reunited with his regiment at Liverpool, and spend the duration of the war in uniform, fighting with Montgomery’s troops in Egypt, Libya and Tunis, and later crossing into Italy. He was injured three times, the third time by a piece of shrapnel that pierced his left nipple, lodged by his heart, and won him a reassignment as the personal driver for Field Marshal Harold Alexander, who was based in Rome. Having enlisted at 16 in 1939, he fought almost the entire war, and was not discharged until 1946.

Tozer, 93, has never visited Dunkirk. The desperate retreat remains too laden with memories, he said. He moved to the United States in 1953, and worked as a chauffeur on North Shore estates until he retired in 1995.

He said he was impressed by the film, a two-hour epic that traces the efforts of two young soldiers as they try to flee the advancing Nazis, and evade sniper assaults, bomb attacks, sinking ships and the crush of panicking fellow troops.

“I shed a few tears,” he said. “I lost quite a few friends at Dunkirk.”