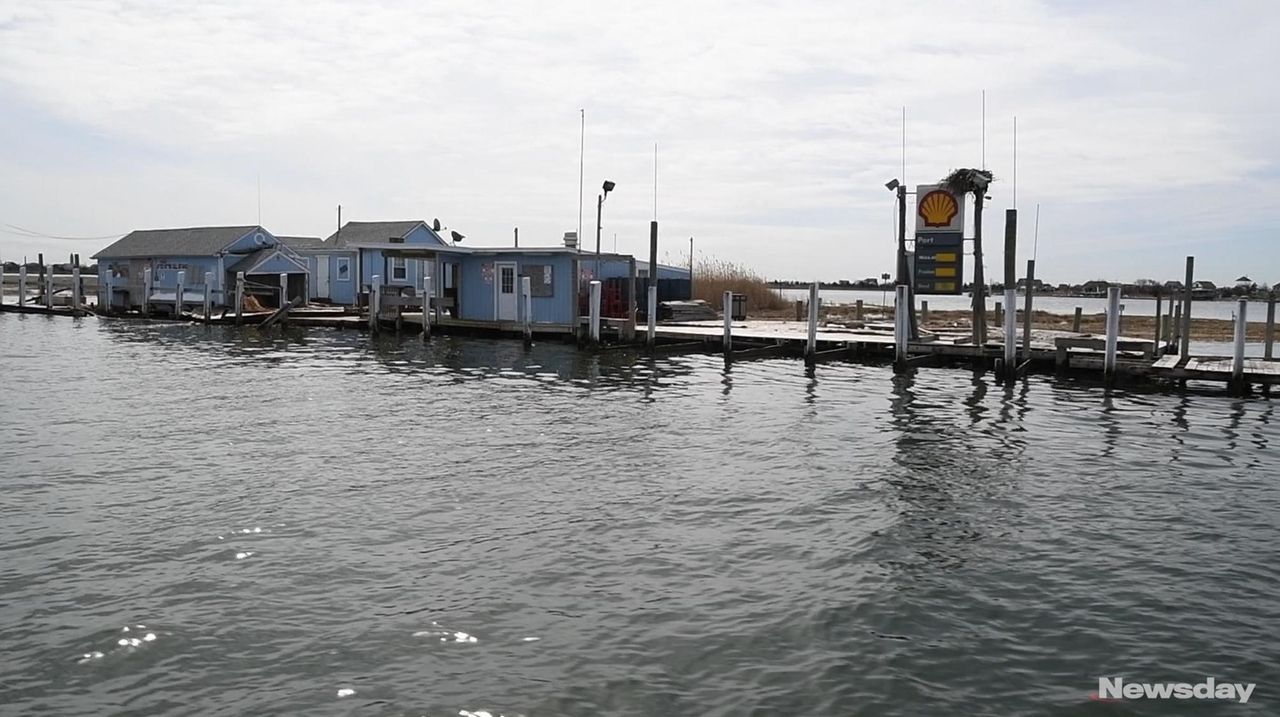 On Friday, Newsday got an inside scoop into the renovation plans for Frank and Dick's -- a former maritime shop that is located on a tiny island in the Great South Bay, only accesible by boat -- that was destroyed during superstorm Sandy.  Credit: Newsday / J. Conrad Williams Jr.

In 2012, superstorm Sandy flooded the remote, 18-acre island in the Great South Bay, ravaging its lone development: Frank and Dick’s, a cluster of ramshackle buildings that had provisioned a loyal clientele of fishermen and boaters with fuel, food, bait and tackle since 1942.

Now, new owners want to rebuild and reopen the abandoned outpost and restore its former status as a South Shore maritime institution.

“We’re hoping that we’re going to be able to bring this place back and make it better than it ever was,” said Ray Latif, 42, of Wantagh, who bought the store in 2015 with his wife, Cheryl. “It’s time.”

The Latifs had for years been regulars at Frank and Dick’s, where they fueled up their boats and met friends for burgers at the small restaurant.

That came to an abrupt halt on Oct. 29, 2012, when Sandy inundated the store’s humble shacks, causing extensive damage.

“The water came up almost 5 feet,” said Latif, who owns a marine construction company in Ronkonkoma, during a recent visit to the abandoned property.

The damage is still evident on the island, where piles of driftwood lie scattered in heaps on walkways still missing wooden planks.

Intent on saving the store from the fate of the State Channel Marina, which suffered heavy damage in Hurricane Gloria in 1985 and sits abandoned on a neighboring island, the Latifs purchased Frank and Dick’s from its owners and took over the lease on Seganus Thatch South, which is owned by the Town of Babylon.

Latif and his wife, who works for the National Weather Service, plan to rebuild Frank and Dick’s from scratch.

“Every single piece of manmade material is leaving this island,” Latif said of the $1.4 million project.

The Latifs plan to build a three-building complex with many of the same amenities as the old store, including a bait and tackle shop, restaurant, generator room, tanks for 30,000 gallons of fuel and a caretaker’s quarters — all lifted about 10 feet above the island.

The Latifs are seeking permits from town, county, state and federal agencies to begin construction.

“We hope they are back serving the community very soon,” Babylon Supervisor Rich Schaffer said in a statement provided by his spokesman, Kevin Bonner.

Bonner said the previous owners owe about $120,000 in back taxes and lease payments, which Latif said he plans to pay.

Richard Schmitt Jr., whose family owned and operated the store for decades before selling it around 1997, said its rebirth is long overdue.

“I’d be thrilled if the place opened again,” he said. “It has too much of a history to just lay there dormant and just falling apart.”