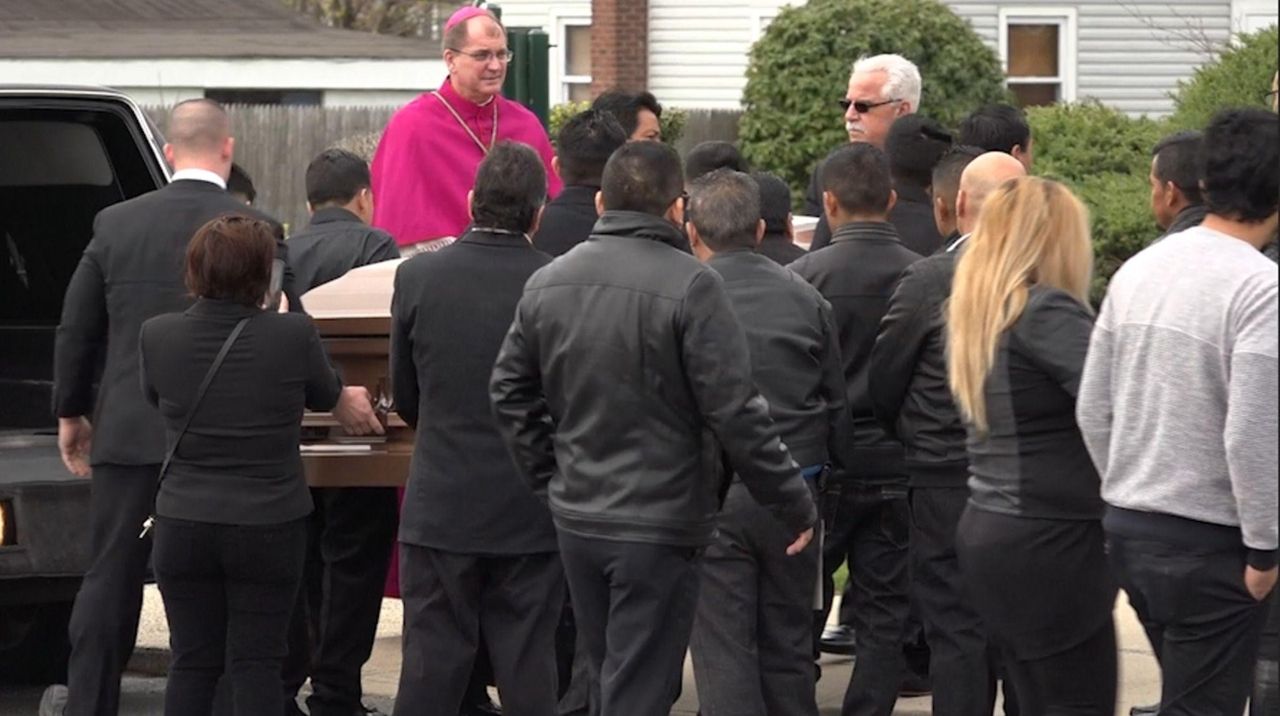 Bishop John Barres of the Diocese of Rockville Centre was among the mourners attending the funeral Mass for 16-year-old Justin Llivicura of East Patchogue on Wednesday, April 19, 2017. Llivicura was the youngest of four young men whose slashed bodies were found in a Central Islip park last week. Credit: Newsday / Chuck Fadely

Blanca Zhicat carried a single white rose Wednesday as she followed the coffin carrying her 16-year-old son from an East Patchogue church.

Before the funeral procession brought her son’s body past the family’s house and Bellport High School and then to his final resting place, Zhicat made a plea to the community.

“From here on out, I want support for the police,” said Zhicat, whose son, Justin Llivicura, was the youngest of four young men whose slashed bodies were found last week in a Central Islip park. “I don’t want other parents to go through what I’ve been through. The way that my son died, it was too ugly what happened to him.”

The slayings, which cast a pall over Suffolk County and spurred more calls for action, are believed to be the work of the brutal MS-13 gang, linked to similar recent killings of teenagers in the Brentwood area.

The grieving mother’s plea came the day after Suffolk County Police Commissioner Timothy Sini made an impassioned call for the community’s help in solving the brutal crime, offering those who step forward a promise of protection.

At the funeral, a framed photo of the slain son, a student at Bellport High who lived in East Patchogue, rested on an easel to the left of the coffin. Red, blue and white hydrangeas were arranged in front of the main altar.

St Joseph the Worker pastor the Rev. Martin Curtin, who presided over the service, offered a prayer for the gang-afflicted youth of Long Island, urging them to come together in peace.

“It’s not just that Justin died,” Curtin said. “We feel just how violently it was done. And it hurts because his hurt is part of us.”

Barres said afterward: “We stand together, against injustice, against violence, against the logic of the culture of death expressed by gang violence.”

Before heading to Holy Sepulchre Cemetery in Coram to bury his only son, Marcelo Llivicura said he didn’t “have any words” to describe the family’s anguish.

Zhicat said that if police “catch these guys” who killed her son, “I hope there’s justice.”

The funeral was the first for the slaying victims. The others were identified by police as Jorge Tigre, 18, of Bellport; Michael Lopez Banegas, 20, of Brentwood; and Banegas’ cousin Jefferson Villalobos, 20, of Pompano Beach, Florida.

Curtin led the family in prayer ahead of the funeral, set for 10 a.m. Thursday at St. Joseph the Worker Church.

“Don’t let all the violence cloud your view of what God has created,” Curtin told the gathering.

About the same time, at a wake for Banegas in Bay Shore, about 200 mourners, including Rep. Peter King (R-Seaford), gathered at Rose Funeral Home.

“Trump won’t deport anyone who comes forward,” he said. “The FBI will not penalize people for reporting murders.”

Rockville Centre Auxiliary Bishop Nelson Perez, who also attended the wake, said: “We need to pray for peace really hard. We need to work for peace as well.”

A memorial service has not yet been scheduled for Villalobos.

Investigators are trying to solve the slayings, which had sparked fear in several Suffolk communities.

“I guarantee you that there is someone in this room who has information about the murders,” Sini said at one point. “I know there is. By not speaking up, you are hurting your community. Work with us and we will protect you.”

“How will you protect us?” a woman called out from the crowd.

“We will protect you by providing anything necessary, whether it is special housing, relocation, immigration benefits, you name it,” Sini replied.

Also Wednesday, Gov. Andrew M. Cuomo said he would offer state help in helping to bring the killers to justice.

MS-13 members “are thugs, these are criminals. We have to do everything we can to stop them. The county executive, county law enforcement are working on it. I’ll be meeting with county officials in the coming weeks to see how the state can help,” Cuomo said.

Asked if the state would send state troopers, he said, “I want to talk to the county about that, but that’s going to be the conversation. Because the most recent killings were just unconscionable and reprehensible, and it’s a situation that’s out of control.”