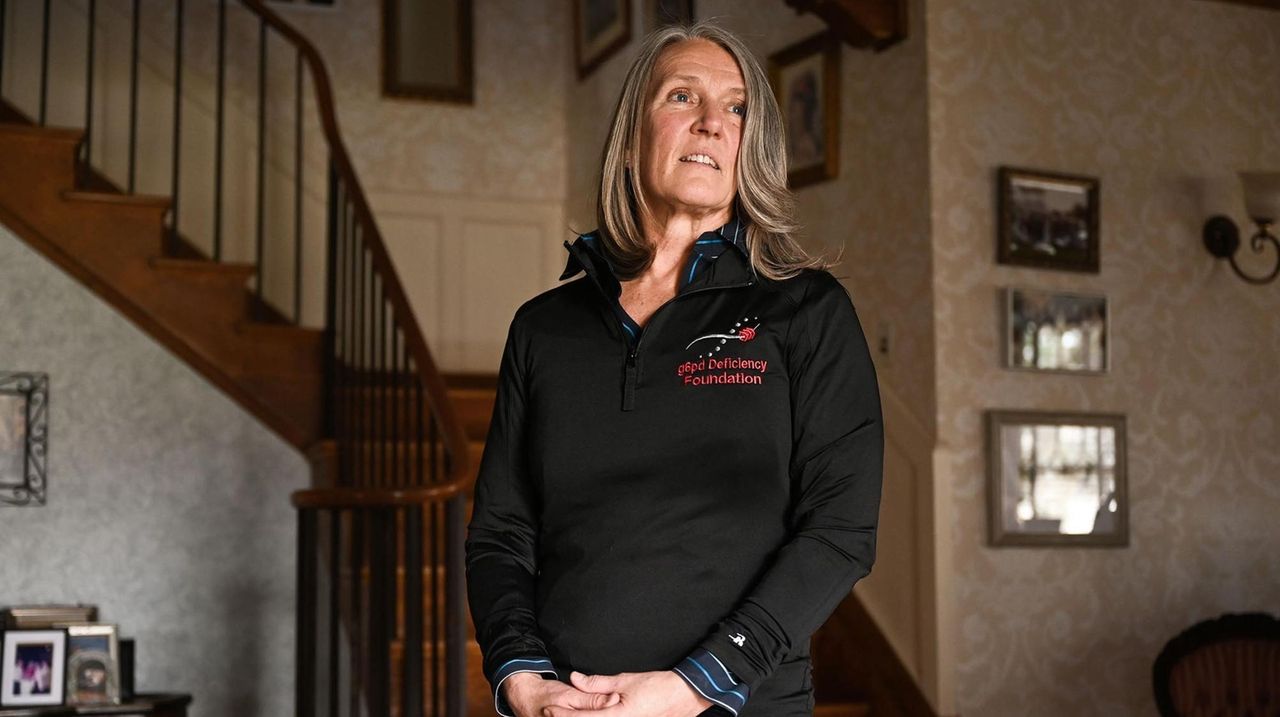 Keely Harris of Babylon is working with state lawmakers to require routine testing of newborns for signs of the genetic disorder glucose-6-phosphate dehyrogenase, or g6pd, after her grandson was affected by it. Credit: Newsday / Steve Pfost

Newborn screening for an inherited genetic condition that affects people of several ethnicities could reduce the risk of long-term disability for many on Long Island, doctors and advocates say.

"Most people who have G6PD deficiency are not even aware they have it," said Bialer, adding that while he has not seen a bad case of G6PD deficiency, that doesn’t mean testing should not be done. "[G6PD deficiency] would be a very reasonable thing to screen for and it wouldn’t be that difficult."

A bill seeking to establish G6PD deficiency as a screening requirement is pending in Albany. The Brody James Bill, which passed in the state Assembly and Senate in May, would add G6PD as required screening for newborns. The bill awaits Gov. Andrew M. Cuomo’s signature or veto.

In a 2014 study published in the National Center for Biotechnology Information, a "geographic correlation" between "G6PD deficiency distribution with historical endemicity patterns of malaria has led to suggestions the two could be linked." The World Health Organization said while most malaria cases and deaths occur in sub-Saharan Africa, regions of the Americas, Southeast Asia, the Eastern Mediterranean and Western Pacific are also at risk.

While there’s no state-by-state data available, WHO said 400 million people worldwide have the deficiency.

"Diagnosis [for G6PD] is made with a blood test to look for enzyme activity, a fluorescent spot test or a DNA test that looks for mutations in the gene," Galvin-Parton said, adding that people with family histories such as jaundice and anemia should be examined.

An excess of bilirubin — a yellowish pigment that is made during the normal breakdown of red blood cells, according to the Mayo Clinic — resulting from the condition can cause "intoxication of the brain" and even death in extreme cases, she said.

The bill is partly named after Keely Harris’ grandson, Brody William, 7, who developed kernicterus, a type of brain damage resulting from jaundice, days after he was born in Rhode Island, where he lives with his parents, who are from Long Island and James Bostic, a Black and Native American man in Massachusetts, who died in August at age 20.

Harris, of Babylon, is the founder and president of the g6pd Deficiency Foundation, a nonprofit based in the village that spreads awareness of the condition.

"Newborn screening is really about … keeping all children healthy," said Harris. "They start off healthy, and that’s what this screening is: to make sure they stay healthy."

James Bostic’s mother, Elizabeth Bostic, who lives in Methuen, Massachusetts, said his death was linked to kernicterus, which he had as a child.

"I never knew that this condition even existed," said Bostic, who met Harris through a group called Parents of Infants and Children with Kernicterus. "So, of course, it would have been extremely helpful to have been screened and knew that it existed so that I would have paid more attention to it."

Sen. Gustavo Rivera (D-Bronx) sponsored the Brody James Bill after connecting with the g6pd Deficiency Foundation through Millennial Strategies, a lobbying group based in Huntington.

"I believe that in a state as ethnically diverse as New York, it is critically important that our routine newborn screenings are as comprehensive as possible," Rivera said.