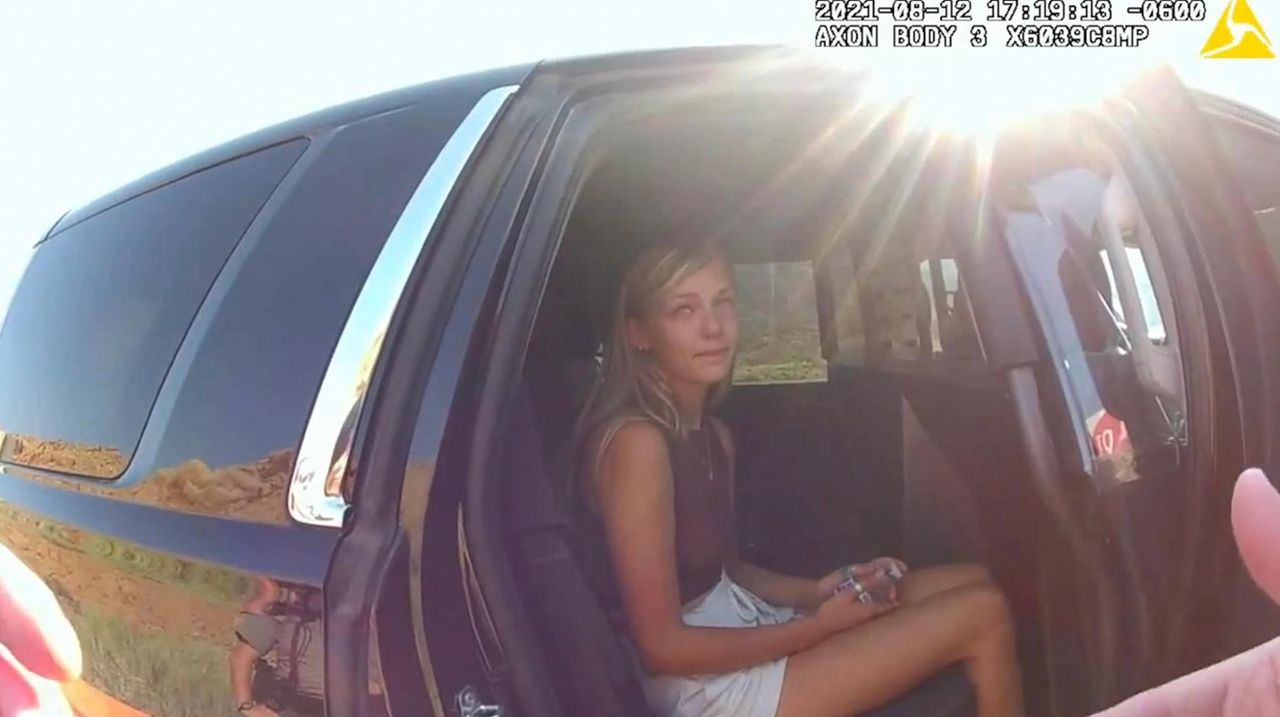 Police released additional body cam footage of Gabrielle Petito and Brian Laundrie. In the new body camera footage obtained by Newsday, Petito and Laundrie are interviewed by Moab City, Utah, Police Department officers on the side of the road outside Arches National Park on Aug. 12 — two weeks before she last communicated with her family. The two had been seen having a physical altercation before being stopped by police. Portions have been redacted by police and Newsday to protect people's privacy. Credit: Moab City Police Dept.

Blue Point native Gabrielle Petito told police in Utah that her then-fiance Brian Laundrie, who is a "person of interest" in her homicide, grabbed her face and left a cut on her cheek when the couple was pulled over in mid-August, according to newly released police body camera footage.

"He, like, grabbed my face … he, like, grabbed me, like with his nail, and I guess that’s why I definitely have a cut right here because I can feel it," Petito said. "When I touch it, it burns."

The new body camera video shows a conversation between police and Petito — whose body was found last month in a national forest in Wyoming — after Moab City, Utah, police received a 911 call on Aug. 12 from a witness who said he saw a man slapping a woman before the couple fled in a white van. The video, which includes the police interviews of Petito, 22, and Laundrie, 23, that were captured on another officer’s body camera and released last month, also contains new audio of a police interview of a witness to the physical altercation between the couple.

Petito and Laundrie, who were traveling cross-country in her van, were pulled over near Arches National Park. When told by an officer that two witnesses saw Laundrie slap her, Petito, sitting in the backseat of a police car, replies: "Well, to be honest, I definitely hit him first. … I slapped him first in the face. … He kept telling me to shut up."

Pressed on whether Laundrie hit her, Petito says, "I guess, yeah, but I hit him first," and starts crying.

Police didn’t ask Petito about her alleged injury again, according to the video, and instead concentrated on Petito’s admission that she slapped Laundrie, who also had a scratch mark.

"From what she’s claiming, she’s the full-on aggressor here," the officer, whose name was not disclosed, says of Petito.

Laundrie, who was driving Petito's van, tells police: "I don’t intend to defend myself by saying anything here. But I pushed her away. She gets really worked up. And when she does, she swings and she had her cellphone in her hand so I was just trying to push her away."

No charges were filed, and Moab City police said last month they were consulting another Utah law enforcement agency to conduct an investigation into the police response, which the city noted in a statement had been "been both praised and criticized."

"At this time, the City of Moab is unaware of any breach of Police Department policy during this incident" the Sept. 23 statement said. "However, the City will conduct a formal investigation and, based on the results, will take any next steps that may be appropriate.

Richard Stafford, an attorney for the Petito family, did not respond to a message about the new body camera video. Laundrie attorney Steven Bertolino said he had not seen the video and declined to comment.

The release of the new body camera footage comes two weeks after Laundrie, who is wanted by federal authorities on a credit card fraud charge, was reported missing by his parents amid the search for Petito. Laundrie had returned home alone to Florida on Sept. 1 in Petito’s van from the road trip and refused to talk to police after Petito’s family reported her missing.

Her body was found Sept. 19 at Bridger-Teton National Forest in Wyoming and the FBI named Laundrie a "person of interest" in her homicide. No cause of death has been released.

A man who witnessed the Utah altercation told police he saw the couple "sort of squabbling over a phone. I want to say he was trying to grab her phone," the witness says while an officer interviews him by cellphone, according to the body camera video.

The witness says the woman was trying to get in the van and eventually crawled inside.

"I think I saw maybe a push or shove but not like a full-on punch to the face or anything," the witness says when asked if Laundrie had struck Petito. The witness said he couldn’t determine if Laundrie pushed Petito with aggression or if it was a "defensive maneuver."

The officer calls a supervisor from his cellphone to consult whether charges will be filed and said Laundrie has a "tiny little abrasion on his jaw."

The officer adds: "It was like a slap fight and the injury is from a fingernail. I just don’t know if it’s worth the whole domestic thing or not, or [if] it’s gonna be some trouble if we don’t do it."

At another point in the body camera video, the officer tells Laundrie they have to charge Petito unless he has another idea about how to resolve the situation.

"Can I go to jail?" Laundrie says.

The officer responds: "You can’t, because we don’t have a charge for you."

Another officer standing outside the white van tells Laundrie: "You did nothing wrong."

FBI collects 'personal items' from Brian Laundrie's Florida home, LI attorney says"The FBI is at the Laundrie home today to collect some personal items belonging to Brian that will assist the canines in their search for Brian," Laundrie attorney Steven Bertolino, of East Islip, said in a text message.  FBI seizes new Laundrie cellphone, LI attorney saysSteven Bertolino said Brian Laundrie bought a new cellphone at an AT&T store near their North Port, Florida, home on Sept. 4 - days after Laundrie returned home without Gabrielle Petito from a cross-country road trip.  Petito attorney: 'Brian, we are asking you to turn yourself in'The lawyer for Gabrielle Petito's family Tuesday urged her former fiance, Brian Laundrie — who police have labeled a "person of interest" in the homicide of the 22-year-old Blue Point native — to surrender to authorities.