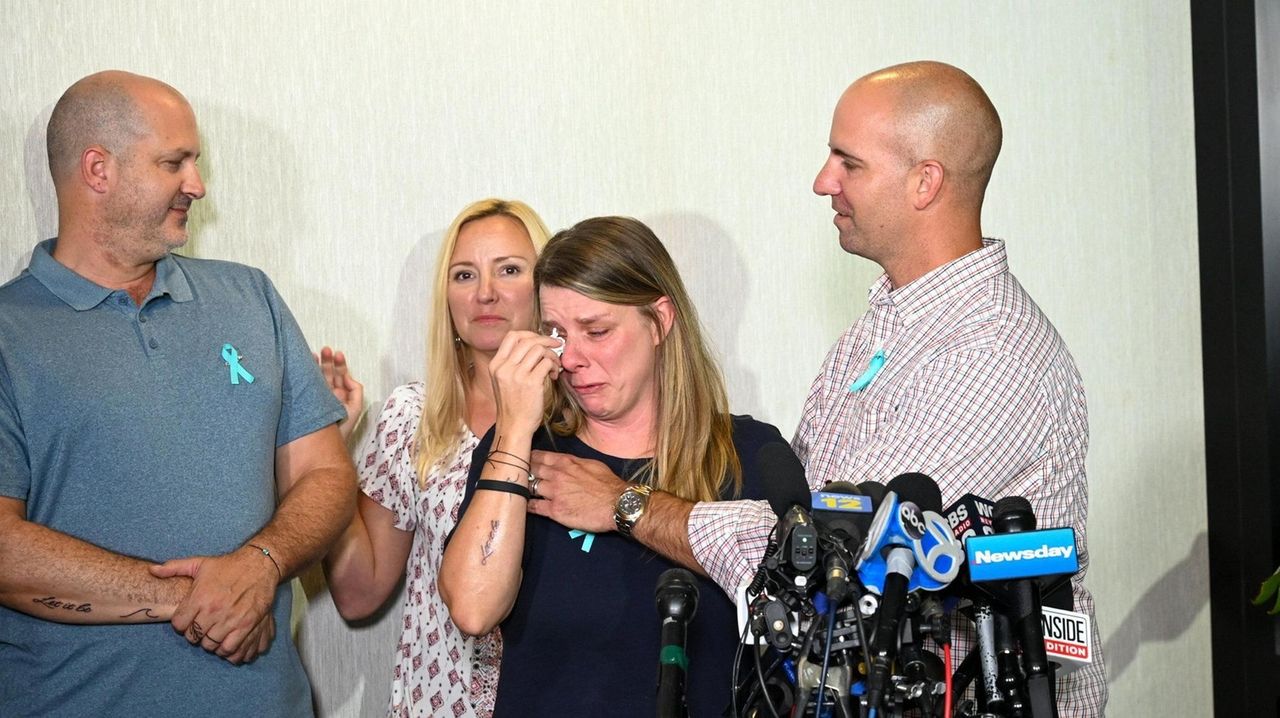 The lawyer for Gabrielle Petito's family Tuesday urged her former fiance, Brian Laundrie — who police have labeled a "person of interest" in the homicide of the 22-year-old Blue Point native — to surrender to authorities.

"Brian, we are asking you to turn yourself in to the FBI or the nearest law enforcement agency " said Richard Stafford, who joined Petito's family at a news conference to discuss the newly created Gabby Petito Foundation.

Petito’s parents and stepfather, in a wide-ranging 20-minute news conference at Stafford's Bohemia office building, described their "emotional roller coaster" over the past several weeks and how they are desperate to bring positivity out of the tragedy.

"There's ups and downs," said stepfather Jim Schmidt. "Days that are full of pain and grief. Sometimes angry. But you stop and take a breath. Remember Gabby and all the great times we had with her. All the good memories and all the good things we want to do in the future. That’s what picks you up. That’s what carries you through."

Joe Petito, Gabby’s father, said the foundation, while still fine-tuning its mission, will help people who may find themselves in a similar situation as his daughter.

"We need positive stuff to come from the tragedy," said Petito, who urged the media to also focus on other missing person cases across the country. "We can’t let her name be taken in vain. We need positive stuff. Anything that we can do to bring it up and help people is what we want to do." 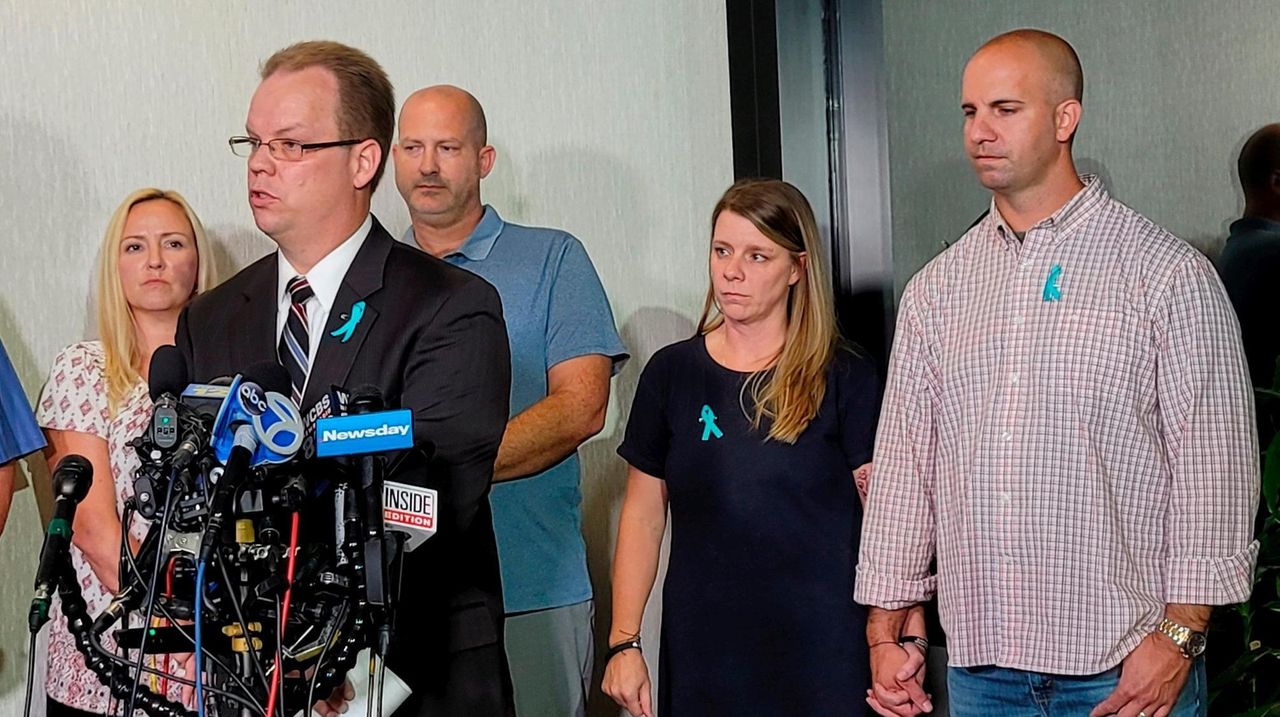 The news conference was the media's first opportunity to ask questions of Petito's family since her body was found Sept. 19 at the Bridger-Teton National Forest in Wyoming. Her family reported her missing after she stopped communicating with them while on a cross-country road trip with Laundrie.

Petito was remembered Sunday during a memorial service in Holbrook, where more than 1,000 people paid their condolences.

"People are inspired by her," said Gabby’s mother, Nichole Schmidt. "It’s hard to put into words, but it means a lot that she inspired so many lives already … We are so proud of her. We are going to keep it going. Keep the light going."

Law enforcement in Florida have been searching a vast reserve for Laundrie, who is wanted by federal authorities on an arrest warrant for credit card fraud allegedly committed after Petito's homicide. The FBI in Denver, which is leading the investigation into Petito's death and the search for Laundrie, declined to comment Tuesday.

Stafford on Tuesday declined to say if that credit card belonged to Petito.

The then-couple had documented their trip on social media with smiling photos and videos of the pair against scenic backdrops.

But the constant travel in Petito's white van caused an "emotional strain" between the couple, according to police in Utah who investigated a physical altercation between Petito and Laundrie on Aug. 12.

Police pulled over Petito's van near Arches National Park in response to a 911 call reporting a man slapping a woman. No charges were filed and the two were told to spend the night apart. Laundrie returned to their Florida home on Sept. 1 and refused to talk to police about Petito's whereabouts.

On Tuesday, Stafford and Petito's family members declined to speculate about Brian Laundrie's whereabouts or whether his parents aided in his disappearance.

On Monday, Bertolino denied the parents know the whereabouts of their son.

"Chris and Roberta Laundrie do not know where Brian is," Bertolino said. "They are concerned about Brian and hope the FBI can locate him."

Bertolino said the Laundries, of North Port, Florida, told police when they reported their son missing that he drove himself in his silver Ford Mustang convertible to the nearby Carlton Reserve, where he planned to go hiking. Bertolino added that their son left his wallet and cellphone at home.

"The speculation by the public and some in the press that the parents assisted Brian in leaving the family home or in avoiding arrest on a warrant that was issued after Brian had already been missing for several days is just wrong," Bertolino added.

Jim Schmidt, who had been in Wyoming searching for his stepdaughter, said it was a difficult decision to return home last week without Gabby’s body.

"But we thought it was important to come home to mourn her and to celebrate her life and to be with her family and friends," he said. "And when they are ready to release her, we will be bringing her home."

On Monday, Gabby’s parents and stepparents all got matching tattoos on their arms reading "Let it be." Gabby, an aspiring artist, had an identical tattoo and designed the lettering, they said.

"I wanted to have her with me all the time," Nichole Schmidt said. "I feel it."

"We are just going to keep pushing forward living every day," Jim Schmidt said. "Loving every day because that’s what Gabby did."

And then there’s the signs.

On Monday, Nichole Schmidt said she was in her car stopped behind another with a Wyoming sticker.

Brian Laundrie's parents don't know where he is, family attorney says "They are concerned about Brian and hope the FBI can locate him," family attorney, Steven Bertolino, said.