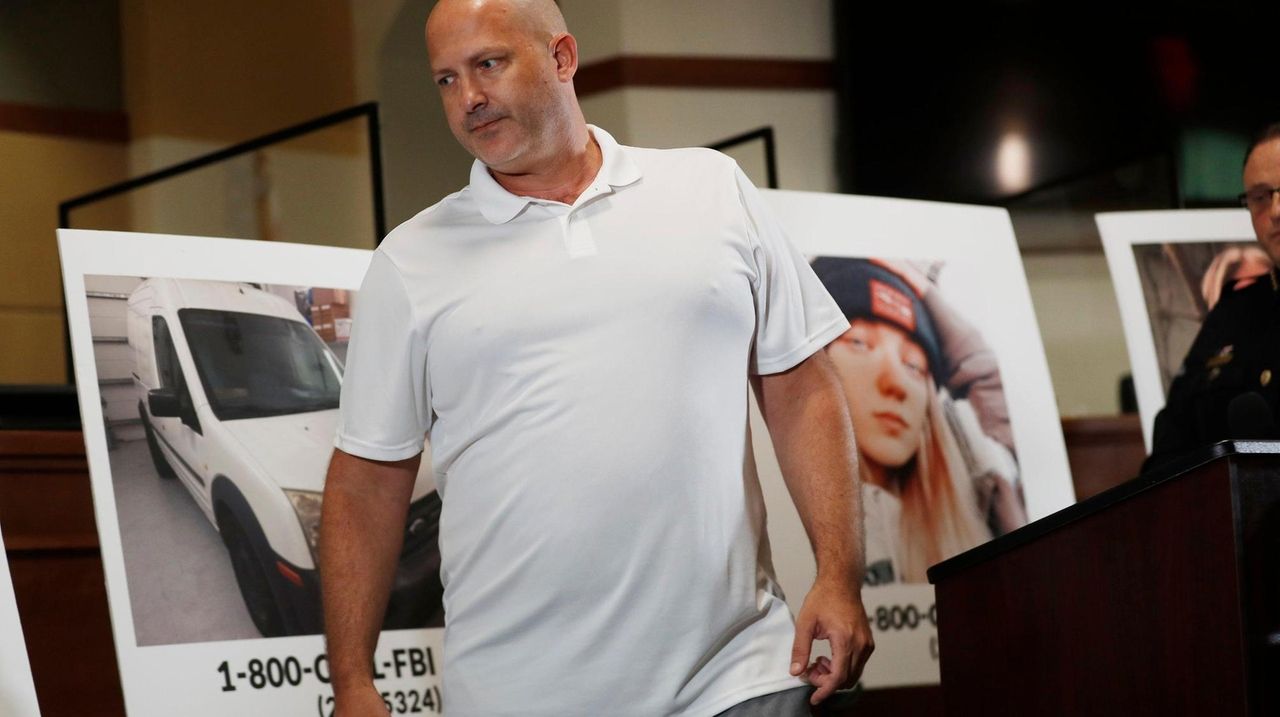 Gabrielle Petito, the 22-year-old Blue Point native whose disappearance and death stunned Long Island and riveted the nation, was remembered Sunday in Holbrook as a kindhearted young woman with a zest for life.

"I don’t want you guys to be sad," her father, Joseph Petito, said during a memorial at Moloney Holbrook Funeral Home. "Gabby didn’t live that way … people gravitated toward her. Her nature was always to smile."

More than 1,000 people lined up to pay their respects to the young woman, whose image had been a familiar presence on the country's airwaves as the search for her continued.

Her mother had reported her missing Sept. 11. But the hunt for Gabby Petito ended tragically, with the discovery of her body a week ago in a remote area of the Bridger-Teton National Forest in Wyoming.

On Tuesday, the FBI said her death had been ruled a homicide based on preliminary autopsy results. The fiance she had been traveling with, Brian Laundrie, was named a "person of interest" in the case and is now missing himself.

Petito's remains are still in Wyoming as the investigation into her death continues, funeral home officials said.

Inside the funeral home, decorated with photographs, flowers and angelic images of Petito surrounding a golden ceremonial urn, Joseph Petito recalled how his daughter loved adventures and outdoor activities like scuba diving and hiking.

Petito's stepfather, Jim Schmidt said her enthusiasm helped remind him there is more to life than work.

"Gabby at 22 years old helped teach me you can always make money but you can’t make up for lost time," said Schmidt, a former Blue Point fire chief. "She is an example for all of us to live by, to enjoy every moment of this beautiful world as she did, love and give love to all like she did."

Outside the funeral home were memorials to the young woman. Two fire trucks held a banner with a heart. Teal-colored bows and angel wings, and her picture and the messages "She touched the World" and "Forever in our Hearts" could be seen on the fence of the nearby Seneca Middle School.

Petito had been on a cross-country trip with Laundrie when she disappeared. Petito's family reported her missing about two weeks after she ceased communication with them and Laundrie returned to his parents' Florida home alone in her van.

Laundrie is wanted on a federal arrest warrant for alleged credit card fraud. He has not been charged in connection with her death.

Also Sunday, the FBI entered Laundrie's family home and left with items from the family. Asked about the reason, the family's attorney Steve Bertolino said in a text message: "The FBI requested some personal items belonging to Brian Laundrie to assist them with DNA matching and Brian's parents provided the FBI with what they could."

Laundrie and Petito had documented their trip through social media with photos and video showing a bubbly Petito narrating their travels. But there was also growing tension between the two, as seen in police body camera footage from an August 12 encounter with officers in Utah.

Police pulled over their van in response to a 911 call about a physical altercation between the two near Arches National Park. Police labeled Petito the aggressor despite an initial witness reporting a man slapping a woman. No charges were filed and the two were told to spend the night apart.

Joseph Petito said women and men should gain inspiration from his daughter's spirit.

"If there is a trip you guys want to take, take it now, do it now while you've got the time," he said. "If there is a relationship that you are in that might not be the best thing for you, leave it. Now. We got more emails from men and women doing that, taking care of themselves first."

Inside the funeral home, family photos and flowers from friends, relatives and organizations like the Blue Point Fire Department lined the walls.

Mourners stifled sobs as they walked through the procession while her family and friends sat in the middle of the room, sometimes leaning over to embrace visitors.

Video and poster boards showed montages of Gabby in family photos, through the years. One image showed her wearing a firefighter's helmet from Blue Point Fire Department No. 2, while others captured a happy girl making silly faces along with the now-famous photo of her standing in front of angel wings.

One poster with the photo read, "Your wings were ready, but our hearts were not."

Visitors received prayer cards with an image of Gabby painted by an Australian artist. On the back is a poem, "Let it Be," written by Joseph Petito.

"Do not grieve for me for I am free

I am traveling a path the lord has taken me

Be not burdened with times of sorrow

I wish for you the sunshine of tomorrow

Perhaps my time seemed too brief

Do not lengthen it with undue grief

The memories that will always be."

"It’s such a tragedy. She was such a kind soul," said Sonja Greves, 22, of Sayville, who said she went to middle school with Petito and ate lunch with her. "She had a kind and gentle heart and was a friend to everybody and a really wonderful person."

She said the memorial, with its photos and mementos, represented Petito's spirit.

High school friend Melanie McGuire, 21, of Blue Point, was emotional after walking through the memorial.

"I’m heartbroken. There’s no words," McGuire said. "She was a beautiful soul and she doesn’t deserve this. The whole town is heartbroken, it’s so horrible."

Brooke Helmsorig, 23, of Islip Terrace, didn’t know Gabby but followed her on Instagram and felt compelled to come to the memorial Sunday.

"Something about her story touched me," she said. "At first I didn’t believe it. I thought hopefully it’s her and she’s still out there. I started crying when I got in there today. She touched so many people. People want justice for her."

Barry Bernstein, 70, of Port Jefferson Station, said he didn’t know the family, but he walked through the memorial and left flowers across the street.

"It just struck a nerve and I wanted to be here," Bernstein said. "It’s very upsetting, and the reaction has been very surprising. Because of her age and the circumstances, it was absolutely horrendous and I felt compelled to be here."

Raffaela Biganini, who described herself as a friend of Petito, broke down in tears, as she left the funeral home.

"I remember when all this happened, I was hoping Gabby knows she will always be loved and never forgotten," she said. "Because I’ll never forget a soul as beautiful as hers."

With Darwin Yanes and Cecilia Dowd.

See photos from the memorial serviceMore than 1,000 people lined up to pay their respects to Blue Point native Gabby Petito Sunday at Moloney's Holbrook Funeral Home, where a memorial service was held. See photos from the scene. What happened to Gabby Petito? Key developments in caseA timeline and map of events leading up to and following the disappearance of Gabrielle Petito, the Blue Point native reported missing while on a cross-country road trip with her fiance, Brian Laundrie. With candles aglow, neighbors remember Gabrielle PetitoHundreds of luminary candles lined a major thoroughfare in Blue Point, and teal bows were tied to street poles, as the South Shore community came out Friday night to remember Gabrielle Petito.