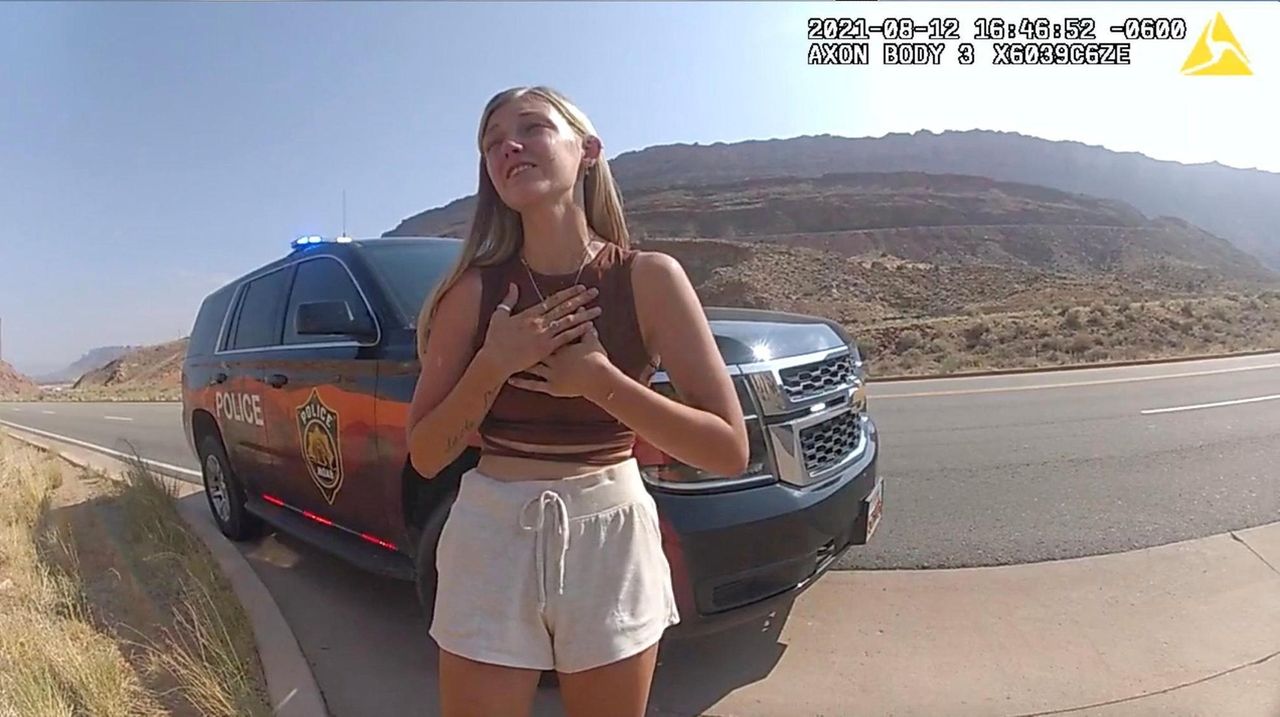 Gabrielle Petito, the Blue Point native reported missing while on a cross-country road trip with her fiance, tearfully admitted striking him in an interview with Utah authorities last month, according to police body camera footage released Thursday.

The one hour, 17-minute video, obtained by Newsday through a public records request, showed Petito, 22, and her fiance Brian Laundrie, 23 — both graduates of Bayport-Blue Point High School who lived together in North Port, Florida — telling Moab police officers on Aug. 12 that they had been arguing and got into a physical altercation.

"We've been fighting all morning and he wouldn't let me in the car before; he told me I needed to calm down," a crying Petito told police, according to the footage recorded two weeks before she last communicated with her family. "He really stresses me out. It was just a rough morning." 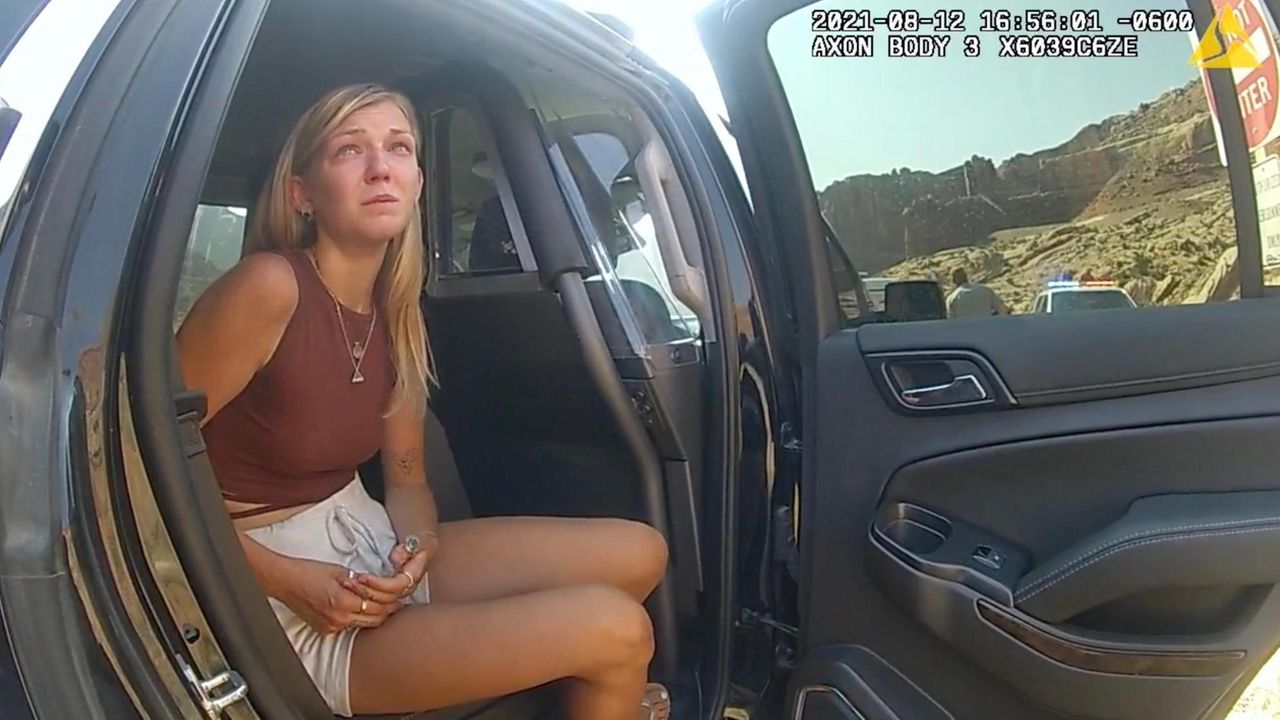 Police body cam footage of Gabrielle Petito, Brian Laundrie traffic stop This body camera footage, obtained by Newsday, shows Gabriella Petito and Brian Laundrie being interviewed by Moab, Utah, police officers on the side of the road outside Arches National Park on Aug. 12 — two weeks before she last communicated with her family. The two had been seen having a physical altercation before being stopped by police. Portions have been redacted by police and Newsday to protect people's privacy. Credit: Moab City police department

The responding officers, who noted the van driven by Laundrie was speeding and crashed into a curb outside Arches National Park before coming to a stop, initially sought to charge Petito with assaulting Laundrie.

Petito admitted hitting Laundrie in the arm and said he grabbed her face. But police ultimately pressed no charges after Petito denied she was trying to cause Laundrie "physical pain" when she slapped him.

Laundrie, who said he was attempting to calm down his fiance, told police: "I definitely don't want to pursue anything. I love her and it was just a squabble."

Police instead instructed the pair to separate until the morning and, in an official report, described the situation as a "mental health crisis."

Petito, who told police she had quit her job as a nutritionist at an organic juice bar to travel, left in her 2012 Ford Transit van. Police dropped off Laundrie at a nearby motel.

Petito stopped communicating with her family by phone in late August, and Laundrie returned to Florida alone in Petito's van on Sept. 1, police have said. Petito's mother reported her missing to Suffolk County police on Sept. 11.

"Yes, they had a disturbance. Yes, it was captured on body cameras, their interaction with law enforcement," Garrison said. "But beyond that, I don't know what it has to do with the disappearance."

Garrison said Thursday that Laundrie, who police labeled a "person of interest" in the case, had still not agreed to speak to investigators. Garrison said the probe remains a missing persons investigation. When asked if any criminality is suspected, the chief said, "none at this time."

"We share the frustration with the world right now," Garrison said. "Two people went on a trip, one person returned. And that person that returned isn’t providing us with any information."

Richard Stafford, the attorney for Petito's parents, declined on Thursday to comment on the body camera footage.

Petito's parents appealed in an emotional letter Thursday to Laundrie's family for any information about their daughter's whereabouts.

The letter, released during a news conference outside Stafford's Bohemia office, said Petito had lived with the Laundrie family in Florida "for over a year" and referenced the couple being engaged.

"She was going to be your daughter-in-law. How can you keep her location hidden? … You were both so happy that Brian and Gabby got engaged and were planning to spend their lives together. Please, if you or your family has any decency left, please tell us where Gabby is located. Tell us if we are even looking in the right place."

The letter, from Petito’s mother Nichole Schmidt, her mother’s husband, Jim Schmidt, as well as Petito’s father, Joe Petito, and his wife, Tara Petito, added: "We understand you are going through a difficult time and your instinct to protect your son is strong. We ask you to put yourselves in our shoes. We haven’t been able to sleep or eat and our lives are falling apart."

Steve Bertolino, the East Islip attorney who represents the Laundries, had no comment Thursday.

In an interview with ABC, Laundrie's sister, Cassie, said "Obviously me and my family want Gabby to be found safe. ... She's like a sister and my children love her, and all I want is for her to come home safe and found and this to be just a big misunderstanding."

Stafford said the couple was engaged but had postponed their wedding because of COVID-19 restrictions.

"They decided with the pandemic they couldn’t have the wedding they wanted, so that was put on hold and they decided to go on their trip instead," Stafford said.

Stafford said the last text received by Petito’s family from her phone was on Aug. 30, but "the Petito and Schmidt families don’t believe that message was sent from Gabby." Stafford declined to reveal the contents of the message.

Stafford also said that when Petito’s mother reached out by text message to the Laundries on Sept. 10 — the day before she reported her daughter missing to Suffolk police — "the Laundries refused to answer those. They stayed silent."

Stafford added: "The family is devastated. Every day that this goes on, they get more and more desperate. They’re at the point that desperation is turning to anger."

"What I need from everybody here is help, because the goal is still not met, and that goal is to bring Gabby home safe," said Joe Petito, who moved to Florida from Selden this summer.

Speaking at the North Port police news conference, the father urged anyone with information on his daughter’s whereabouts to call the FBI tip line at 1-800-CALL-FBI.

"There is a tip line that you can call anonymously," Joe Petito said. "Whatever you can do to make sure my daughter comes home, I’m asking for that help. There is nothing else that matters to me now. This, this girl right here, this is what matters."

Police: Boyfriend 'person of interest' in woman's disappearance; report says they had recent altercationPolice in Florida will hold a press conference today to discuss the disappearance of Gabrielle Petito, 22, a former Blue Point woman who went missing while traveling on a cross-country road trip. 'Come forward': Family of missing woman implores boyfriend to disclose where he last saw herIn a statement, the parents of Gabrielle Petito said the boyfriend of their missing daughter is refusing to answer "critical questions" about their daughter's whereabouts. 'She needs help': Parents searching for ex-Blue Point woman gone missing in WyomingThe parents of Gabrielle Petito, 22, formerly of Blue Point, say she was traveling in Wyoming with her boyfriend when she stopped communicating with them last month.