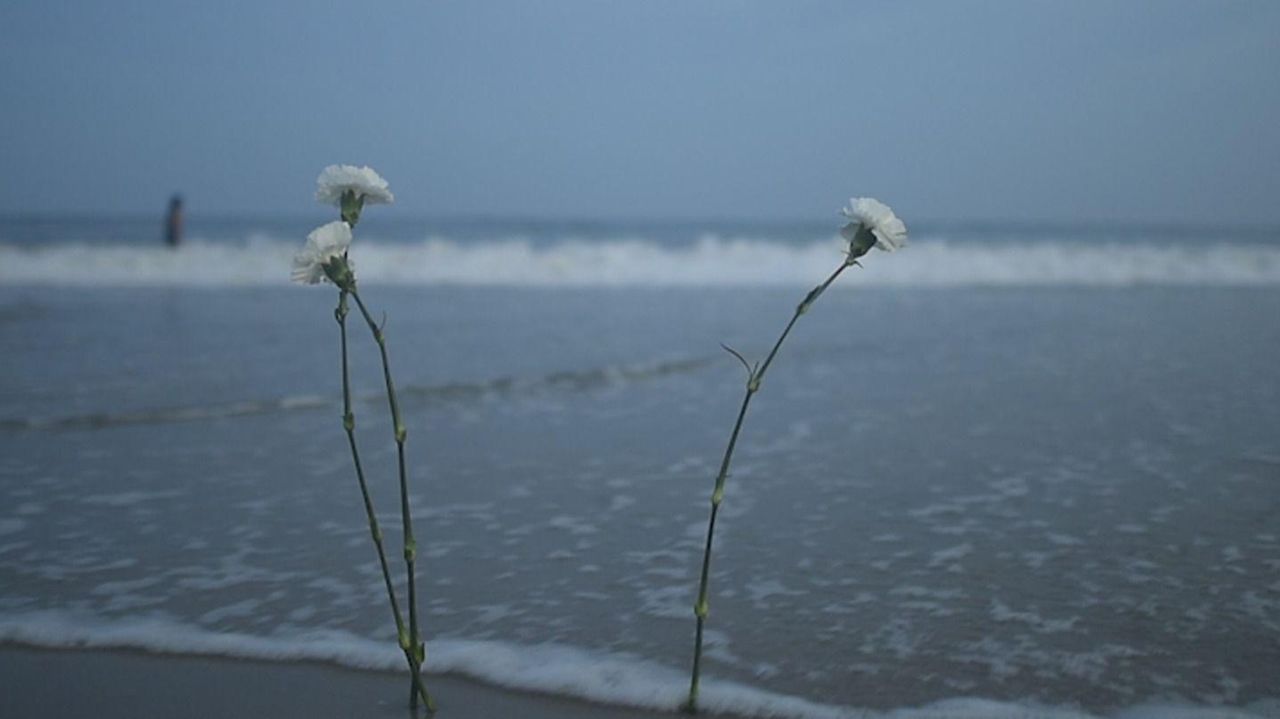 About 80 friends, family and onlookers attended a 20-minute ceremony on Monday, July 17, 2017, for the 21st anniversary service at the TWA Flight 800 International Memorial in Shirley. At 8:31 p.m. July 17, 1996, the plane exploded, crashing into the ocean south of the Moriches Inlet and killing all 230 passengers. Like every year, the ceremony included a reading of the names of those lost. It concluded shortly before 8:20 p.m., with volunteers passing out white carnations to toss into the ocean. Credit: Johnny Milano

Jeannine Yates approached the black granite wall at Smith Point County Park for the first time on Monday, her lips pursed in a thin line and round black sunglasses hiding her eyes.

She was attending Monday night’s 21st anniversary service at the TWA Flight 800 International Memorial in Shirley in remembrance of her ex-husband, Capt. Ralph Kevorkian. He was flying TWA Flight 800 on July 17, 1996, when it exploded at about 8:31 p.m., crashing into the ocean south of the Moriches Inlet and killing all 230 passengers on board.

Yates, 72, of Los Angeles, stopped to hug Margaret Krick, who had lost her son Oliver in the crash. The two had never met, but they held onto each other.

“It’s very emotional to be here. But I’m very happy to be here,” said Yates, who had come that evening with her son, Douglas Kevorkian.

Yates joined about 80 friends, family and onlookers at the 20-minute ceremony, which — like every year — included a reading of the names of those lost. It concluded shortly before 8:20 p.m., with volunteers passing out white carnations to toss into the ocean.

Before the ceremony, Nancy Timbrell and her friend, Marge Evaristo, posed for a picture in front of the 12-foot wall, which bears the name of each victim in white. The setting sun cast a warm glow across their faces.

“My brother would’ve loved this; he was into gardens, he was an engineer,” said Timbrell, 71, of Berlin, Connecticut, who lost one of her brothers, Andy Krukar. “It’s very refreshing, It feels OK to be here; you need to be here to get that renewal.”

Louis Palmeri, a first responder who’d been on standby at a local fire department for hours after the plane crashed, had come to pay his respects, as he’s done almost every year.

“We felt a lot for the surviving families, and what they must be going through,” said Palmeri, 62, of Shirley. “It’s a hard thing as a volunteer that we weren’t able to do anything.”

The memorial, now 15 years old, spans 1.5 acres and is teeming with flowers and shrubs. It costs $125,000 to $150,000 to maintain annually — a reality that worries many of the affected families who fear for its future, said John Seaman, who heads a victims’ families group that helped spearhead the effort to bring the memorial to life.

Suffolk County set aside $45,000 in the 2017 budget toward the memorial’s maintenance, Legis. Rob Calarco (D-Patchogue) said Monday. While the county initially retracted funding for the memorial from 2012 to 2014, Calarco — whose district oversees Smith Point County Park — and Legis. Kate Browning (WF-Shirley) fought for the reinstatement of financial support in 2015.

“It’s in the county park; we have a responsibility there,” said Calarco, who was unable to attend Monday’s ceremony. “To me, this is just doing our little part.”

For the families of the passengers, the memorial is “an expression of our feelings,” said Seaman, whose 19-year-old niece Michele Becker was killed in the crash. And those feelings remain powerful year after year.

“When you come here physically, and you look at the crash site and you remember you were here 21 years ago grieving on the beach, it all comes back in a rush,” he said. “And it transports you right back.”