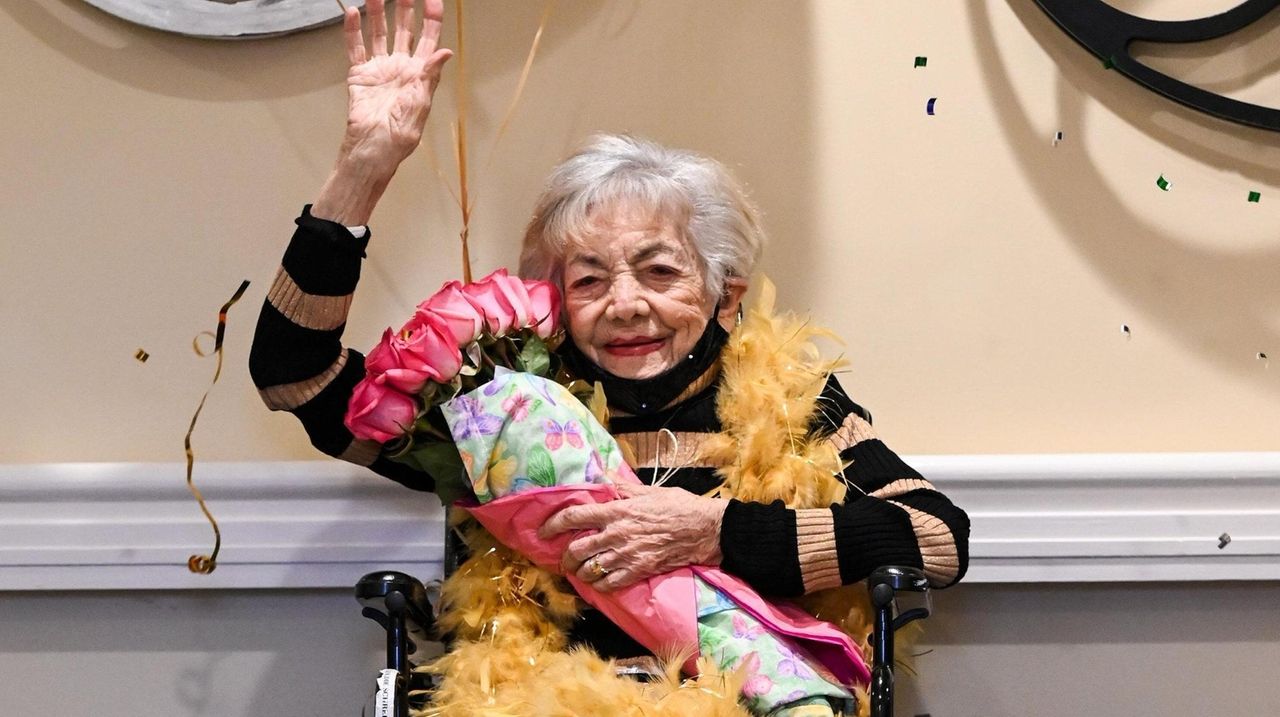 Joyce Goldklank, of Melville, spoke to Newsday on Wednesday about her mother, Goldie Schreiber turning 104 and how her love for living has kept her alive.  Credit: Newsday / Steve Pfost

East Northport resident Goldie Schreiber was born during World War I, before women could vote, and before the Spanish flu pandemic of 1918.

She has lived through other difficult times since then, including the Great Depression, the civil rights era and the Sept. 11, 2001, terrorist attacks.

On the eve of her 104th birthday, Schreiber said the secret to her longevity — even during another pandemic — is simple.

Schreiber, surrounded by "happy birthday" balloons, spoke Wednesday during a video call from her East Northport assisted-living facility, The Bristal.

Earlier Wednesday, she was joined by daughter Joyce Goldklank, of Melville, and her husband, Mark.

Joyce Goldklank, 78, said her mother has always been a pioneer of sorts, and a forward thinker. Goldklank noted the family's matriarch cast a ballot for president through the mail earlier this month.

"The first president she voted for was FDR," Goldklank said. "She was always ahead of her time. … She was a woman born in 1916 and she graduated college."

Goldklank teared up reflecting on her mother’s life.

"It’s so great to have her here for so many years," she said.

Schreiber didn’t mince words when asked about her choice in 2020’s presidential election.

"Not that guy that is in there now," she said of President Donald Trump.

"I voted for the Democrats. It’s important to vote. The world goes the right way, instead of the wrong way," she said.

Schreiber was born in Brooklyn and graduated from Brooklyn College in 1938 with a degree in education. She worked in real estate and property management in New York City, and was a longtime resident of Baldwin. Her husband Jerry died in 2013 at age 92, relatives said.

Goldklank said she was amazed her mother has lived through so much history. She said the pandemic has been difficult for her mom. COVID-19 prevented Goldklank from seeing her mother for at least four months. Schreiber has also been unable to see her grandchildren, Goldklank said.

The isolation caused Schreiber to lose weight as she battled other ailments, but both her spirits and health have improved, Goldklank said.

Schreiber now uses a wheelchair but two years ago, she was walking an hour a day in 15-minute intervals, her daughter said.

Thursday will be dubbed "Goldie Schreiber Day" at her assisted-living facility, said Barbara Heaphy, recreation director there, adding that Schreiber is a delightful resident.

"She’s living in this time that is so dark and unprecedented," Heaphy said. "She’s such a bright light — she’s our Goldie."

After 104 years, Schreiber said her life has provided all the gifts she needs.

"I have a wonderful family," she said. "My special gifts are my grandchildren, and my daughter and her husband. What more can you want when you got the family and all that comes with it?"