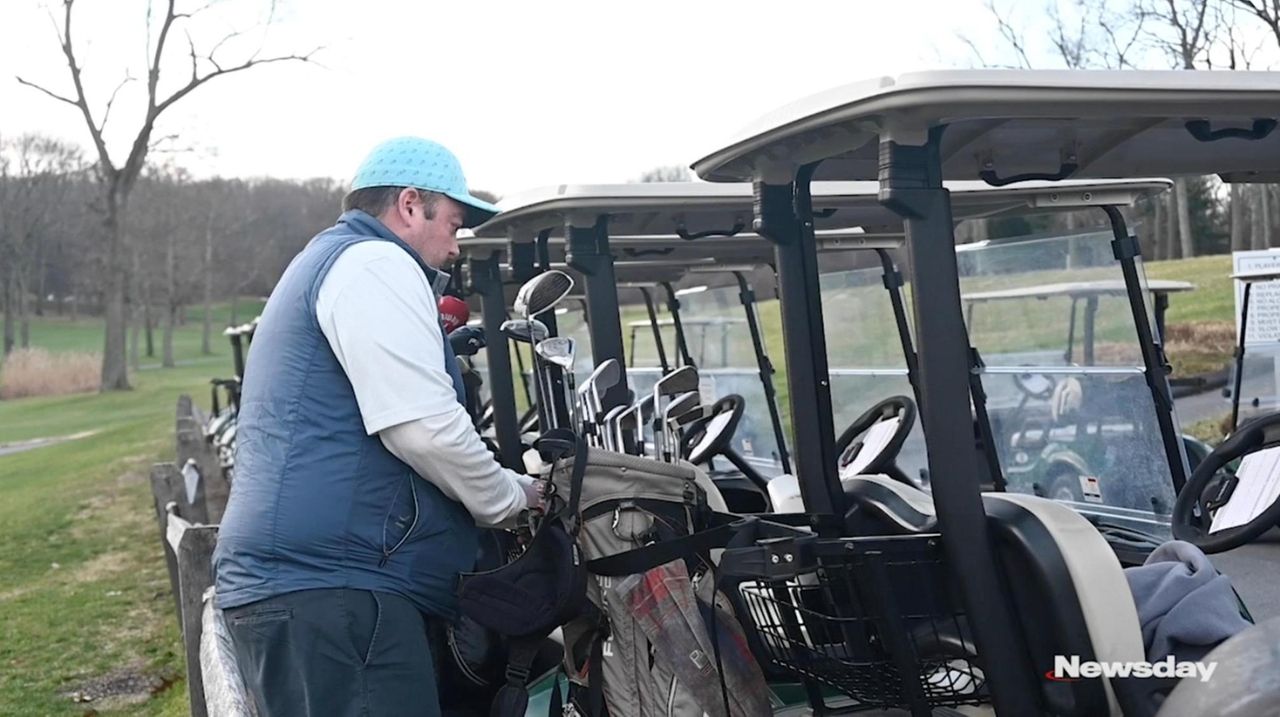 Michael Hebron, head professional at Smithtown Landing, talks about the effect the pandemic has had on business at the Smithtown golf course.  Credit: James Carbone

Golf boomed on some Long Island town courses in 2020, providing a respite for players and a revenue bump for local government.

The Honorable Joseph Colby Town of Oyster Bay Golf Course recorded 35,368 rounds in 2020, the most in town history and a 31% increase over 2019. Course revenue rose like a well-struck wedge, from $1.3 million to more than $1.5 million. Profits will support debt service on capital improvements to the course and also bolster the town’s general fund.

Play was up 54% at Huntington’s nine-hole Dix Hills Golf Course and the town’s 18-hole Crab Meadow recorded 52,572 rounds, up from 38,710. The courses had their busiest season in 15 years, a town spokeswoman said, despite missing a month in April because of COVID restrictions and a week in August after Tropical Storm Isaias. The $2.1 million in greens fees was also the most in 15 years, and will be used to offset the cost of course maintenance. Hempstead play jumped 15% to 91,799 rounds, with revenue increasing $110,000 to $1.9 million.

Forty-two of Long Island's 146 courses are municipally owned and not all saw increases, with rounds and revenue dropping sharply at North Hempstead's Harbor Links. That appeared to be an exception locally and nationally, with Golf Datatech, a research company, calculating that Americans played 13.1% more rounds of golf through November 2020 than they did in 2019.

Janeen Driscoll, director of brand communications for the United States Golf Association, attributed some of that increase to better weather and much to the pandemic, which provided a reason for "latent golfers" who might not have played for years to return to the sport. "It was the one activity they could do, to gather with friends and do it in a safe way," she said.

At Smithtown Landing, which recorded about 36,000 rounds, 20% more than in any year over the past decade, mornings got so busy that starts spilled over into once slower afternoons. Increased revenue from those extra rounds will be plowed back into course improvements, said Michael Hebron, the club’s PGA Hall of Fame head pro. "We took reservations seven days in advance, and they would fill up quickly," he said.

"I planned on playing more, but with COVID I played a lot more," said Sean Keenan, a recently retired Oceanside schools physical education teacher, who estimates he played 200 rounds last year, many with his wife and their two sons.

The USGA issued guidance last year about the use of modified flagsticks and raised hole-liners to minimize the possibility of exposing golfers to the virus, and course managers across Long Island followed with practical changes that included emphasizing electronic registration, multiple daily cleanings of facilities and equipment and spaced tee times.

"Residents want to be reassured that everything is safe," said Oyster Bay Town Supervisor Joseph Saladino. They showed their satisfaction with the measures the town put in place "with their feet and their credit cards," he said.

More play and a safety regulation that for a time mandated one golf cart per player took a physical toll on some courses. Management at Smithtown’s 70-year-old course tripled greens maintenance after Isaias knocked out the watering system six days over the summer and is rebuilding three tees, Hebron said.

At the end of a busy year, Hebron said he hoped all those extra rounds played would mean new players coming to love his sport. "Four or four-and-a-half hours out in nature in today’s busy world — what a nice emotional vitamin pill that is," he said.