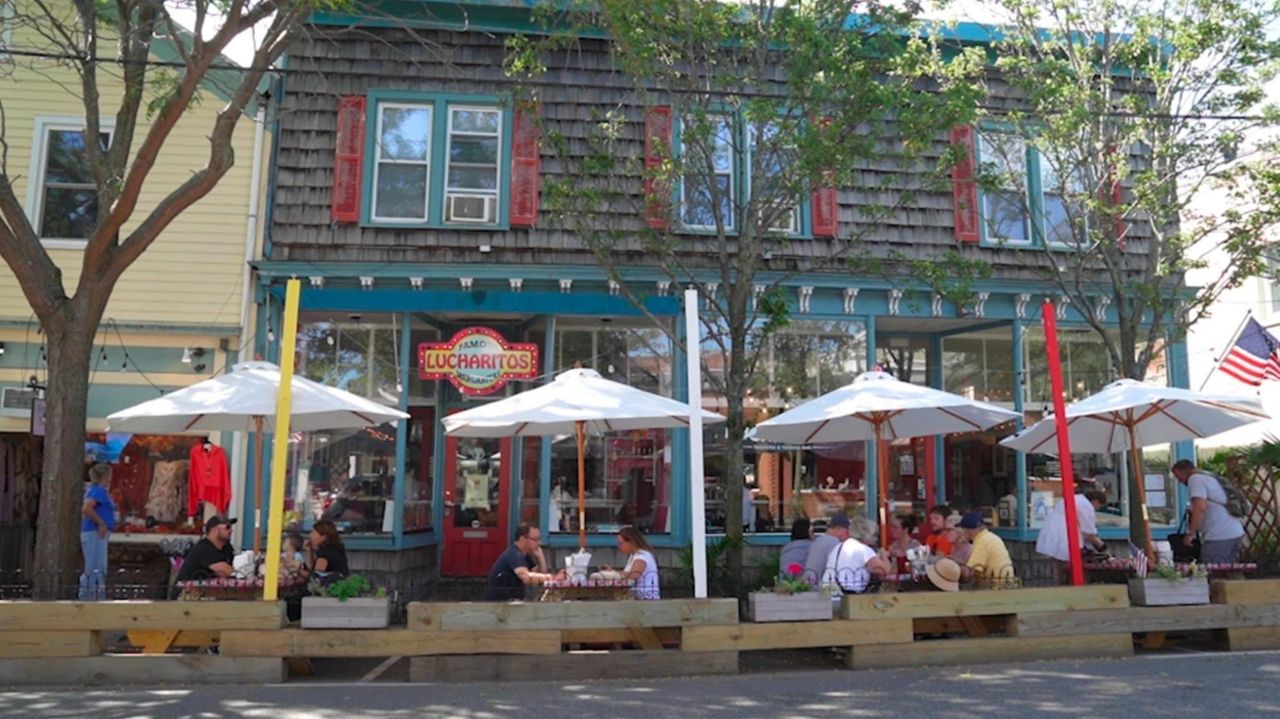 Greenport’s popular outdoor dining parklets are being dismantled this week, ending a COVID-19-era program that some local business owners hope will return next summer.

The parklets, first installed on portions of Main and Front streets after the pandemic hit Long Island in 2020, were dismantled in January and put up again in May.

Greenport Village obtained a state Department of Transportation permit in July 2020 allowing it to extend outdoor dining and retail space on Main and Front streets amid reduced indoor capacity.

The Greenport Village Business Improvement District asked the village board to seek an extension of the permit — which expires Sept. 24 — through October, but village officials declined. Mayor George Hubbard said it was time to take down the parklets but the village board would discuss the project again if the BID requests it next summer.

"I think it was a worthwhile program, but it’s just kind of run its course at this point," Hubbard said. "From the residents that I've heard from they say 'summer time’s over, let's get back to normal.'"

The parklets consist of 8-by-8 timbers screwed together and not covered like New York City dining sheds. The BID spent about $20,000 on materials and has used mostly volunteer labor to install, maintain and dissemble the parklets, according to the improvement district's president Rich Vandenburgh.

Fire and police officials had expressed traffic safety concerns, Hubbard said. Five accidents involving the parklets have been reported this year, the mayor said. A 31-year-old man was charged with aggravated driving while intoxicated after his vehicle struck one of the barricades about 2 a.m. on Sept. 4, according to Southold Town Police. No one was hurt in any of the incidents, Hubbard said.

Business owners said they wish the village would have pushed to keep the structures during the North Fork’s busy fall season as many customers are still skittish about dining inside due to the delta variant.

Jennie Werts, a chef and co-owner of the restaurant, Ellen’s on Front, said her business will lose all of its 25 outdoor seats when the parklets are taken away.

"With the virus, it is still needed and it’s beneficial to everybody," she said. "This is a time when people want to eat outside even more so than the summer because it’s not as hot."

Andy Harbin, owner of Andy’s restaurant, agreed and said he thinks the program should continue past the pandemic’s end because it enhanced the look and feel of the village.

"If you do the pluses and minuses, there were more pluses," he said. "We should keep it just because it makes the village better."

Vandenburgh noted the parklets got little use in November and December of 2020 but keeping the structures in place from Memorial Day through Halloween would be the "sweet spot" for businesses. Vandenburgh said the BID was open to discussing a village fee paid by restaurant owners to use the space to alleviate resident concerns.

"This is part of the kind of innovative discussion I hope we will be able to have with the village," he said.