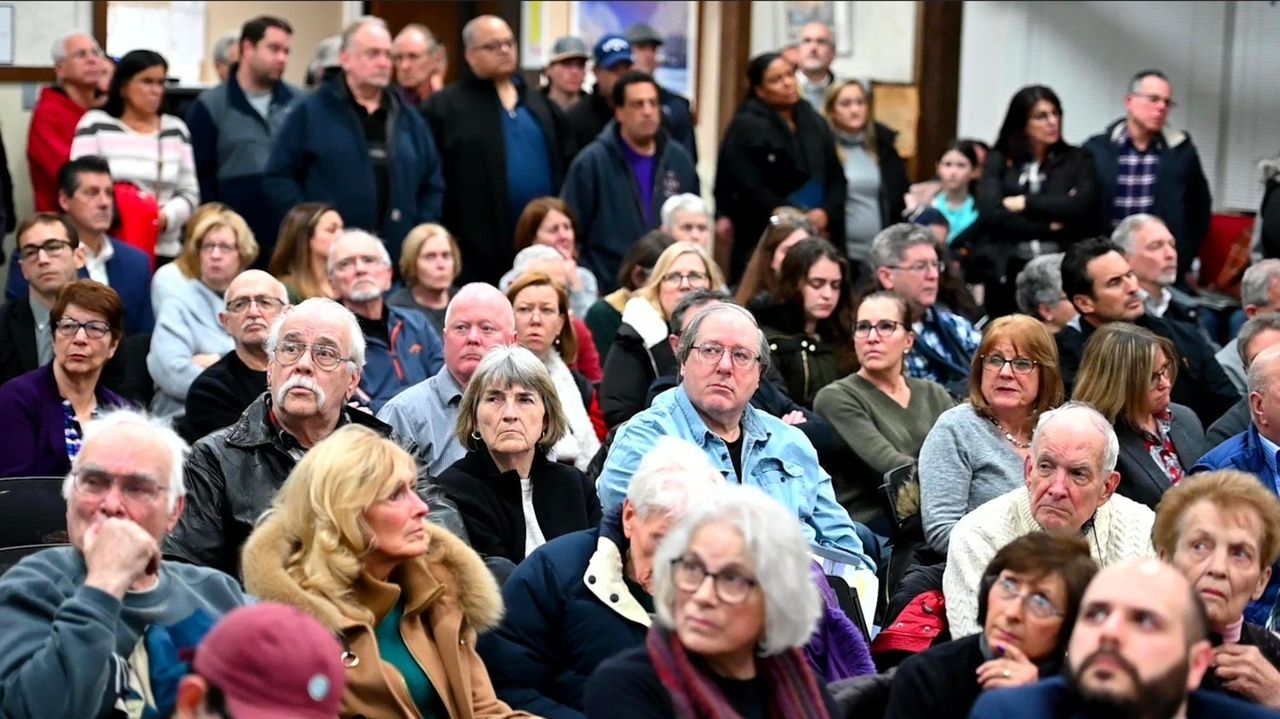 Dozens attended a Smithtown Planning Board hearing Wednesday night on the proposed development of the Gyrodyne property. Officials and residents met at the Smithtown Senior Center in Smithtown, to discuss Gyrodyne's plan to subdivide its 75-acre St. James site, to build a hotel, offices and assisted living.   Credit: Newsday / Steve Pfost

Three Gyrodyne representatives described the company’s development proposal for its St. James site at a Smithtown Planning Board hearing Wednesday night as sustainable and modestly scaled.

In the three hours that followed though, speakers described company plans for uses such as a hotel, offices and assisted living space in terms that verged on the apocalyptic.

Carl Safina, a Stony Brook University ecologist, warned of the “near certainty” of copycat development that would help “ruin the character of our communities” in a letter read into the record.

While the hearing quickly turned into a referendum on development of the 75-acre site, its ostensible purpose was more narrow: to allow public comment on a nearly 3,000-page planning document, released in draft form late last year, that offered the first public reckoning of the possible impacts of a range of development scenarios. Gyrodyne has applied to subdivide its land into nine lots, keeping existing businesses and a catering hall. Not all the lots would go toward commercial uses; the company envisions keeping open space and building a sewage treatment plant.

The Planning Board will use the document’s final version for guidance when it votes on Gyrodyne’s application to subdivide the site. A denial of the subdivision application would complicate but not necessarily stop development.

Brookhaven residents and elected officials have complained about a planning process they said is ignoring several current or potential projects nearby and does not adequately address their concerns, since the Gyrodyne site is just inside the Smithtown border but would impact their neighborhoods, roads and resources. Of particular concern is Stony Brook Road, which abuts the site and would bear much of the north-south traffic to and from it.

Planning Board members remained mostly silent during the hearing. One member, veteran lobbyist Desmond Ryan, said he would recuse himself “from any action on this matter to prevent any apparent conflict of interest that I may have.” His announcement followed publication of a Newsday story about his public comments supporting Gyrodyne in the early 2000s.

Kevin McAndrew, a partner in Cameron Engineering, a Woodbury firm hired by Gyrodyne to plan development, acknowledged traffic concerns, but said contemplated uses at the site had been carefully chosen to minimize the volume of traffic they might produce at any given time.

Development would bring benefits such as walking trails, newly planted trees, as well as millions in dollars of tax revenue and economic activity, he said. Another potentially significant benefit: The proposed sewage treatment plant, which he said would be cleaner than the septic systems currently in use at the site, and could allow for sewering of downtown St. James.

His presentation did not appear to sway the speakers who followed, most of whom were Brookhaven residents, but they may not have been his target audience.

”Development of that property will only enhance us and allow us to grow,” said Natalie Weinstein, a civic leader in St. James who has lived in the hamlet for decades. Gyrodyne, she said, is already an “involved and caring partner” in the community.