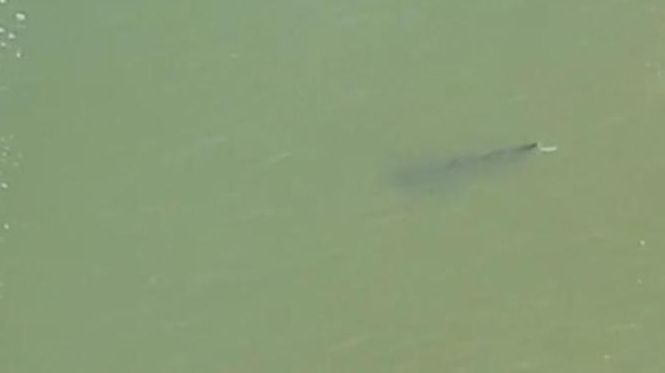 A 10- to 12-foot shark was spotted in the Hamptons on Saturday, swimming in the waters of Quogue. The shark whose species has not been identified, was monitored by Southampton Town bay constables and the town's police department. Credit: Southampton Town Police Department

A 10- to 12-foot shark took an unusual inland journey to the Hamptons on Saturday, swimming into the shallow waters of Penniman Creek, where it was spotted by a sailor at the Shinnecock Yacht Club who was preparing for a nearby race.

“It’s not something you see every day,” said the sailor, Ian Connett, citing his years of summers in Westhampton.

“I’m walking right along the dock; I see two enormous fins, and this thing just flopping around the beach,” he said by telephone. “I stopped … It swam right up near the beach, in Penniman Creek, off the Shinnecock Yacht Club. It’s just kind hanging out there in the creek.”

Connett verified the approximately 9 a.m. sighting — which occurred during the Discovery Channel’s annual Shark Week — with other yacht club members. The police and the U.S. Coast Guard were alerted to the potential danger, an uncommon occurrence for the area as sharks are ocean dwellers.

“We wanted to make sure no one was thinking about going paddleboarding or swimming in that area; it was definitely a very large shark,” Connett said, estimating the two fins seen in his photo are about the same distance apart as the pilings on the dock beside it — and they are about 6 feet apart.

The water is only a few feet deep there, and “It was flopping around a little bit, I thought it was it was going to beach itself at first.”

The Woods Hole, Massachusetts-based National Fisheries Science Center was not immediately available to comment on possible theories — from disease to laying eggs — that might have caused the shark to venture a few miles from the ocean, possibly through Shinnecock Inlet, the easternmost passage linking the South Shore’s barrier islands to the Atlantic.

“This is the first time I've heard of a shark being this far inland," said Lt. Daniel Hartman of the Village of Quogue police department, a 12-year veteran.

The finned invader, whose species has not been identified, was monitored by Southampton Town bay constables, and the town's police department planned to send a drone up to assist, police said.

"We are cautioning swimmers and boaters in the area to be aware of this ongoing situation, and to keep distance to allow the Bay Constables and Law Enforcement to monitor the situation," the police statement said.

Hartman, monitoring the bay constables' radio, said: "It seems like he's headed east," toward the open waters of Shinnecock Bay.