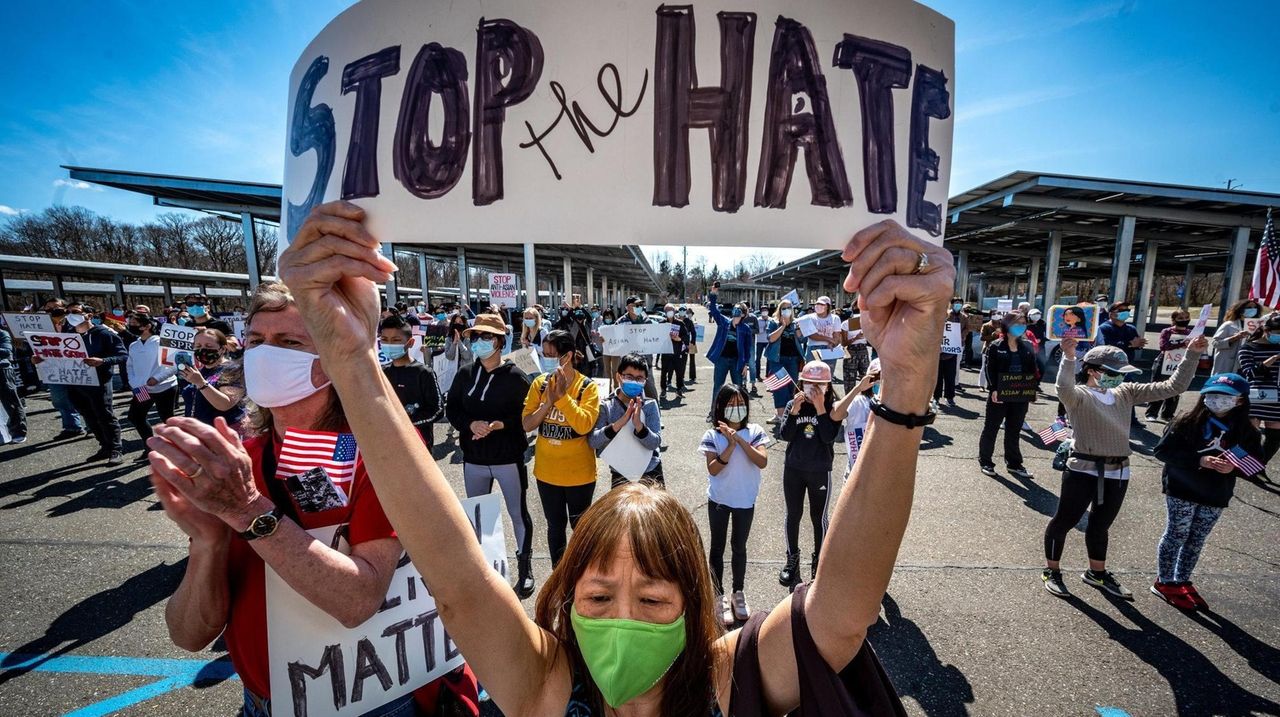 For Howard Fei, Saturday’s rally in Hauppauge to protest violence against Asian Americans was a way for him to show that he could not stay silent on the recent attacks against people of Asian ancestry in Atlanta, New York and the West Coast.

"The United States is a strong country because it welcomes people of all backgrounds from everywhere to live here. As a country, we should be united together, and we should not be separated by this kind of diversity," said Fei, 35, of Stony Brook, a U.S. Army veteran who carried a sign that read "We are not silent on racism."

"Stop the Hate" was the message that Fei and hundreds of people chanted at the Saturday rally outside Suffolk County's H. Lee Dennison Building in Hauppauge, where local, state and federal elected officials joined representatives from law enforcement and civil rights activists to speak out against the spike in hate crimes nationwide targeting Asian Americans that has sparked similar rallies across the country.

In Hauppauge, Suffolk County Executive Steve Bellone, whose office co-sponsored the rally outside the Dennison Building along with the Suffolk County Asian American Advisory Board, said the rally was a clear message that "hatred and intolerance was unacceptable" in Suffolk or anywhere else.

"Too many of our brothers and sisters, our fellow Americans in the Asian American and the Pacific Islander community, have been subject to verbal assaults and physical violence. We are here to say this is unacceptable. We will never tolerate acts of hate like this here in Suffolk County. And if you dare to commit a hate crime here, you will be prosecuted here to the fullest extent of the law, no doubt about that," Bellone said.

Several speakers at the rally heavily criticized Rep. Lee Zeldin (R-Shirley), who was in attendance, for not supporting a resolution introduced by Rep. Grace Meng (D-Queens) in the U.S. House condemning anti-Asian hate related to the COVID-19 pandemic and for his support of former President Donald Trump, whose labeling of the COVID-19 virus as "the China virus" was seen as fanning the flames for violence against Asian Americans this past year.

"We need everybody who says they support us to actually support us. No more platitudes," State Sen. John C. Liu (D-Flushing) said.

Tracey Edwards, the Long Island regional director of the NAACP, didn’t mention Zeldin by name, but she said people must stand together "against everyone who is going to attend a rally, but then vote for hate."

Zeldin, speaking at the rally, said he stood with the Asian American community, pointing out that his wife, Diana Zeldin, was of Asian ancestry.

"There’s a time for government and there’s a time for politics, and right now, each and every one of you are here, I hope, for all of the right reasons, to condemn the violence targeting Asians, the anti-Asian sentiment, and I thank you," Zeldin said.

Speaking to Newsday reporters after the rally, Zeldin defended his vote on that resolution, saying the resolution was pushed as a "pro-Trump, anti-Trump resolution."

"I think this conversation shouldn’t be about that, but that’s my personal opinion," Zeldin said.

Tsai Wei Sun, 45, of Huntington Station, said she hopes that the rallies will inspire people to speak out when they see violence or acts of hate against Asian Americans being committed.

"I want people to be nice to be kind to one another. If we see people being discriminated against, we should stand up and say something," Sun said.

In New Hyde Park, protesters marched down Jericho Turnpike chanting, "This is what community looks like" and "Stop Asian Hate."

Andrea Valentino, 43, of Massapequa Park, came to the rally with her mother and her 7-year-old daughter, holding signs like, "I am not a virus. Hatred is the virus."

"I felt very alone when I moved to Long Island. I see this turnout and how it affects all people," Valentino said. "We need to have a voice. We’ve been silent for too long. Unfortunately it’s taken a tragedy to bring us out together."

A diverse group, joined with protesters who have previously organized Black Lives Matter rallies, called for unity in the community and ending racism and discrimination against Asian communities and all races.

The rally was organized by Long Island Peaceful Protests and leader Terrel Tuosto.

"In wake of a rash of hate crimes against our Asian brothers and sisters, we must stand up and fight against Asian hate. If you let this slide, it’s like saying it’s OK to happen," Tuosto said. "Everyone deserves to have human rights that do not exist in this country. These attacks are for no reason other than wearing skin and looking different than you look."