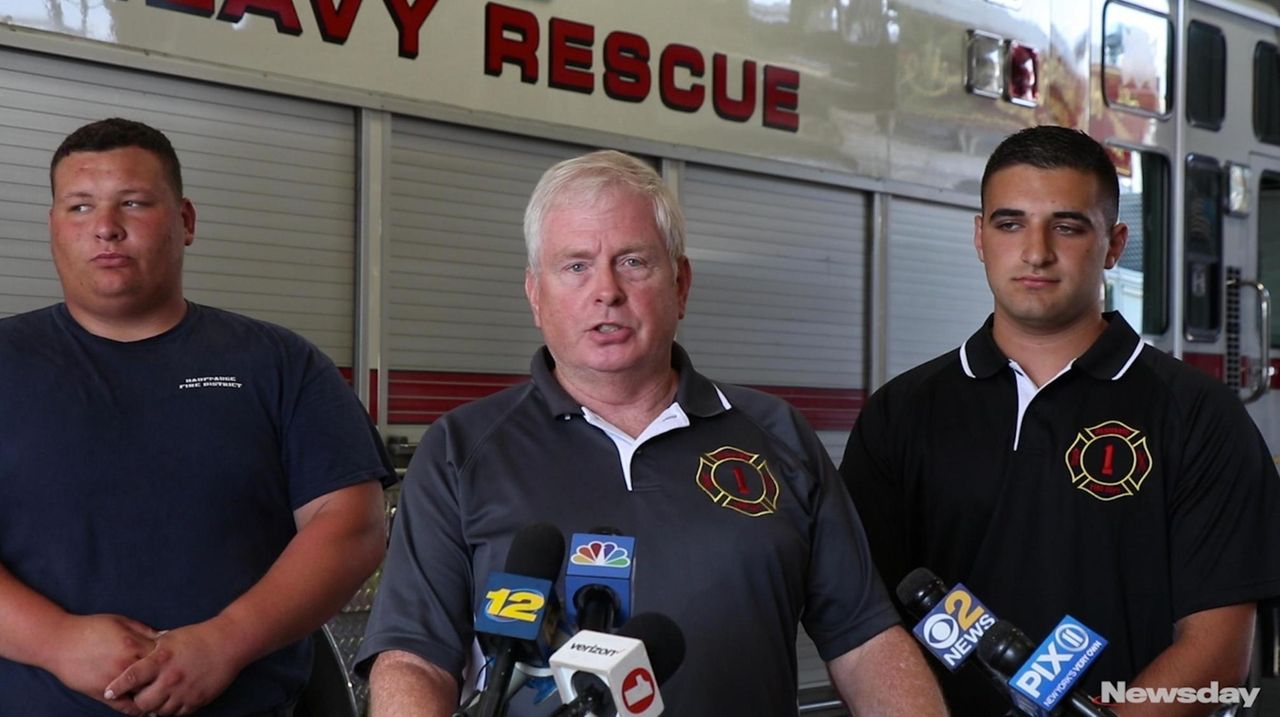 Hauppauge firefighter Larry Kunzig explains how he sprang into action to help a pregnant woman who collapsed outside his home Monday night. A news conference was held Tuesday at the Hauppauge Fire Department. Credit: Newsday / Jessica Rotkiewicz

A mother and her day-old baby are  “doing well” after a Monday afternoon rescue by volunteer firefighters in Hauppauge led to an emergency C-section, officials said.

The mother, whom firefighters did not identify other than saying she was 47 years old, collapsed at 6:50 p.m. Monday outside the Southern Boulevard home of Grace Kunzig and Larry Kunzig, a Hauppauge firefighter with 45 years of experience. The two were playing with their grandchildren at the time.

Grace Kunzig, 60, a teacher’s aide in Hauppauge schools, said during a news conference Tuesday that she spotted the woman through the home's picture window.

“Larry, come over here — something’s going on,” she recalled saying. Larry Kunzig, 64, a heavy-equipment operator at Brookhaven National Laboratory, ran out the door wearing just his socks, no shoes.

The woman’s lips were blue and her mouth was foaming, Hauppauge Fire department officials said. Larry Kunzig began CPR on the woman while his wife called 911, mobilizing Hauppauge and Nesconset firefighters and an ambulance. Grace Kunzig comforted the woman’s husband, who she said shuddered and wept on her shoulder.

Hauppauge firefighters John Munro and Andrew Mendola, both 18 and recent graduates of Hauppauge High School, soon arrived at the scene and offered to take over CPR. Larry Kunzig declined. “I got this, I got this,” he recalled telling the younger men.

Minutes later, an ambulance took the woman to Stony Brook University Hospital, where doctors performed the C-section to deliver the baby.

Firefighters said the circumstances that led to the woman’s collapse were unclear. Temperatures reached 90 degrees Monday, but the woman, who officials said appeared to be about seven months pregnant, had been riding in an air-conditioned SUV.

The Kunzigs said they’d gone through an ordeal of their own eight months ago, when a heart condition caused Grace Kunzig to collapse on New Year’s Day. Hauppauge firefighters — including Andrew Mendola and his brother Michael, who also responded to the scene Monday — had rescued her, but husband and wife said they vividly recalled the horror of the day.

They had slept little Monday night. “We were up all night praying for the baby,” Grace Kunzig said.