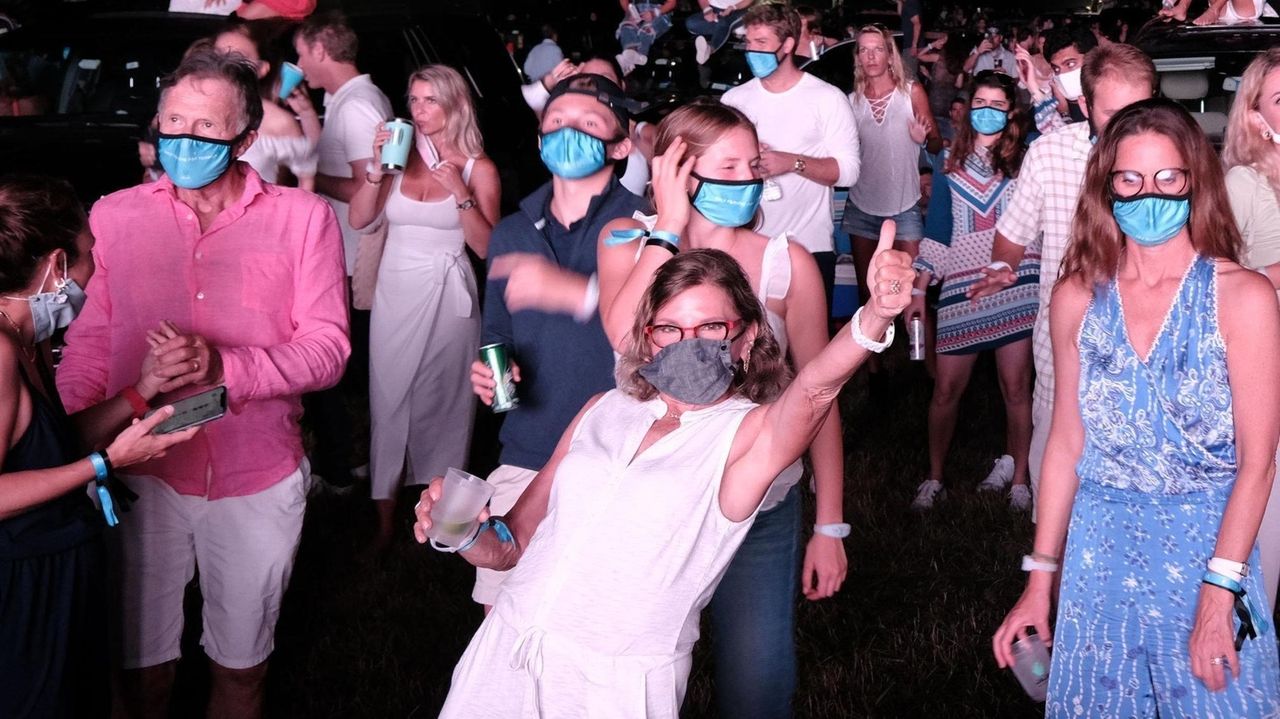 The state Department of Health's investigation into a weekend “drive-in” concert in Water Mill that included widely reported violations of COVID-19-related health codes could result in civil fines and criminal penalties, according to Gov. Andrew M. Cuomo on Tuesday.

Why the town issued the concert's permit, “what the promoters thought they were doing,” "how the event as it was going on was allowed to get out of control” and “why the local law enforcement didn’t do anything when they saw that they had an event that was out of control and all the rules were being violated” are among the questions the investigators will probe, Cuomo said, speaking during a conference call with reporters.

“It was a gross violation of common sense," Cuomo said. "It was grossly disrespectful to fellow New Yorkers."

Cuomo's announcement came after state Health Commissioner Dr. Howard Zucker sent a formal letter of inquiry to the supervisor of Southampton Town as part of an investigation into the concert.

Videos from a concert held in Southampton on Saturday show egregious social distancing violations. I am appalled.

The Department of Health will conduct an investigation.

We have no tolerance for the illegal & reckless endangerment of public health.
pic.twitter.com/gf9kggdo8w

The Safe and Sound drive-in concert, where carload tickets ranged from several hundred dollars to $25,000 to rent a 10-person RV, was allowed to run from 6:30 p.m. until 10:30 p.m. at Nova’s Ark Project in Water Mill, according to its town-issued permit.

Event guests were instructed not to leave their own personal 20-by-20-foot area surrounding their vehicle except to use the restroom, according to organizers In the Know Experiences and Invisible Noise. Many wore masks, according to photos and videos shared from the event.

Southampton Town Supervisor Jay Schneiderman, who performed on the drums at the concert headlined by the pop duo The Chainsmokers, said the organizers violated the permit by allowing an estimated 200 people to congregate in a VIP section. Schneiderman said he left the venue about 10 p.m. and the VIP crowd grew shortly after.

“I would have never personally permitted or participated in an event if I had any sense the organizers would violate the conditions of the permit,” Schneiderman, who often plays drums at East End charity events, said during a news conference Tuesday.

Schneiderman said the town police department did attempt to stop the crowding that evening and that town code enforcement cited the organizers for violating the permit. In the Know Experiences and Invisible Noise agreed to pay $3,375 to have police on site, according to the permit.

The town will investigate whether there were additional violations, Schneiderman said.

Zucker in his letter said he was “greatly disturbed” to have learned of reports that the drive-in concert “involved thousands of people in close proximity, out of their vehicles, a VIP area where there was no pretense of a vehicle, and generally not adhering to social distancing guidance.”

“I am at a loss as to how the town of Southampton could have issued a permit for such an event, how they believed it was legal, and not an obvious health threat,” Zucker said.

The town's response to the state on Tuesday mirrored Schneiderman's remarks.

"Once violations became apparent, corrective measures, including requesting organizers to address the situation and the Police Department engaging in efforts to orderly disperse the crowd took place," reads a letter sent to Zucker by Southampton Town attorney James Burke.

The group that congregated around the stage was made up of the performers’ entourage, which was previously backstage and was separated by barricades from other concertgoers, according to the event company.

“The Safe & Sound drive-in concert fundraiser followed the guidelines created by the Centers for Disease Control and Prevention and made best efforts to ensure New York’s social distancing guidelines were properly maintained throughout the event,” a statement issued by In the Know Experiences and Invisible Noise said.

“We collaborated with all state and local health officials to keep everyone safe, create awareness for local businesses, provide work to over 350 people who have been unemployed as a result of the pandemic and to bring some joy into people’s lives during these difficult times.”

William Wilson Jr., whose firm Wilson & Associates Security Consulting provided security for the concert, called the event well-policed and well-produced. He said most people complied with guidelines, but his staff did have to ask about 25 noncomplying carloads to leave.

“We, during the event, continuously reinforced the social distancing and safety measures,” said Wilson, a former Southampton town and village police chief. “We received overwhelming cooperation from the guests that were in attendance, but people are people and there were those who objected to staying in their assigned area and wearing a mask.”

A representative for The Chainsmokers could not be reached for comment.

On the governor's call Tuesday with reporters, he said: “Drive-in concerts. You get out. You stand next to the car, no concessions, stretch your legs, sit on the hood. There’s a square around the space that’s socially distanced. Fine. That’s not what the concert was in the Hamptons. I mean, look at the pictures. That’s not what it was”

The governor also said the state would investigate allegations of "behavior" in the village of Southampton — a jurisdiction within the town — that also violates public health regulations. He did not elaborate on what those violations were. Zucker sent a letter to Schneiderman and Southampton Village Mayor Jesse Warren on Tuesday alluding to multiple reports of COVID-19-related "violations happening on a recurring basis" and directing them to immediately enforce guidelines.

Warren on Tuesday said he would welcome help from the state in enforcing its guidelines.

“We are happy to work directly with the Governor’s office, are very appreciative and thankful for all of his support, and would welcome any assistance from his team,” Warren said in a text message.

Melissa DeRosa, the secretary to the governor, said: “If those similar things are happening around the state, they should see what happened in the Hamptons and be forewarned.”

Schneiderman said he has asked organizers to identify the people in the VIP section to learn if anyone has tested positive for COVID-19 and may ask the state to sign off on larger events in the future.

“I completely regret that this happened,” he said. “I wish it hadn’t. It shouldn’t have happened.