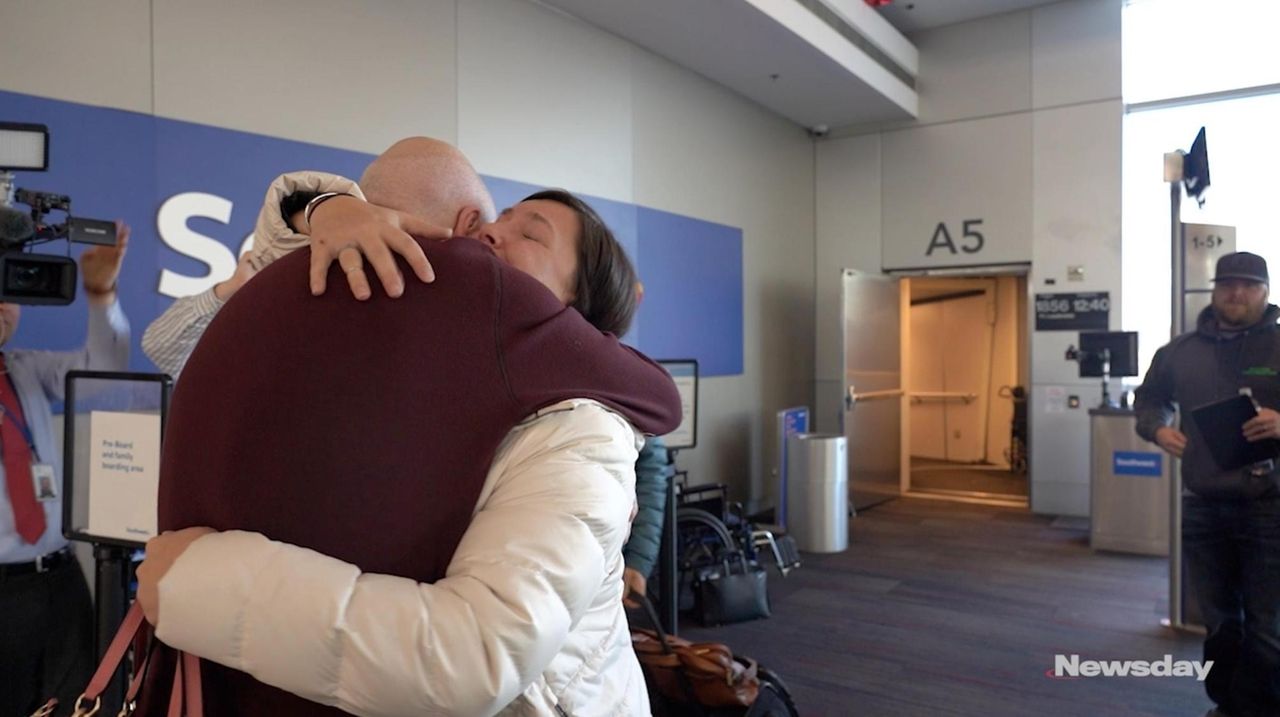 Years after a heart transplant saved Raymond Miehl's life, on Friday he met the woman whose father gave him the heart. Credit: Debbie Egan-Chin

Raymond Miehl knew he was dying, and would not make it much longer without a heart transplant.

One night at 1 a.m. his wife woke him at their condo in Medford. The call had come in. A heart was available. A man in Ohio had died, and was donating his heart.

The surgery was successful, but for months Miehl, now 62, did not know the identity of the donor. Then, two years ago, he was able to contact the man’s daughter through an organization that connects donors' families and recipients.

On Friday, they met for the first time, embracing in a tearful encounter at Long Island MacArthur Airport in Ronkonkoma as Ashley Brayton, 29, and her husband stepped off a flight from Ohio.

“I can’t believe it — finally,“ said Miehl as the two hugged.

Brayton, tears rolling down her face, said, “I’m so grateful that my dad was able to do this for him. I know he is watching over us.”

Later, she said, “You can’t take your organs to heaven. You might as well give someone else a fighting chance.”

At one point she placed her hand on Miehl’s chest and felt the beating heart of her father, Ronnie Davis.

“That’s really amazing, “she said. “I thank God for the miracle. “

Miehl’s problems started in 2014 when his health began to deteriorate, with his heart weakening. Eventually it was operating at only 5% of normal capacity, he said.

By 2015, he was spending “more time at Stony Brook Hospital than he did at home,” said his wife, Lisa.

“I could not even get out of bed, that’s how sick I was,” Miehl said.

Meanwhile, in Ohio, Davis was struggling with his own health problems, including depression, and drug addiction.

In March 2016, at age 46, he accidentally overdosed and died, his daughter said.

When Lisa Miehl woke up her husband that night with the news that a heart was available, Ray had been waiting nine months for one. As he opened his eyes, he said to her, “I was having a dream that if I didn’t get a heart soon I wasn’t going to make it through the weekend.”

They rushed to Montefiore Hospital in the Bronx. Doctors told him that if the heart did not fit or there was anything wrong, “they would close me up and I would have to wait for another one,” he said.

After the successful transplant, he said he didn’t wake up for seven days.

It took him three months to get back on his feet and ready for an important event: His daughter was getting married in September 2016 and he was able to walk her down the aisle.

“That was one of the greatest things I think I’ve ever done in my life,” Miehl said.

For Brayton, this was bittersweet news. Her father died before he could walk her down the aisle at her June 2016 wedding.

But it helped give meaning to his death, she said. “It was another beautiful thing that came out of something very sad for me."

Today, Miehl is doing well. He works out on a treadmill, and is in charge of distributing a monthly newsletter at his condo complex.

That brings joy to Brayton.

“When you lose a loved one, usually they are just gone, and I feel like I still have a part of my dad here,” she said as she looked at Miehl. “Even in such a tragedy, something really beautiful came out of it.”

1:07
Where the rich and famous give their private jets a glow-up
Proposed downtown development on tap at public hearing Tuesday
Seniors Calendar: Events from Aug. 1 to Aug. 7
Asking the Clergy: Faith and climate change
These employers, colleges and NYC theaters will be requiring COVID-19 vaccines
2:32
Prayers for the dead, and the survivor, in Quogue crash
Didn’t find what you were looking for?