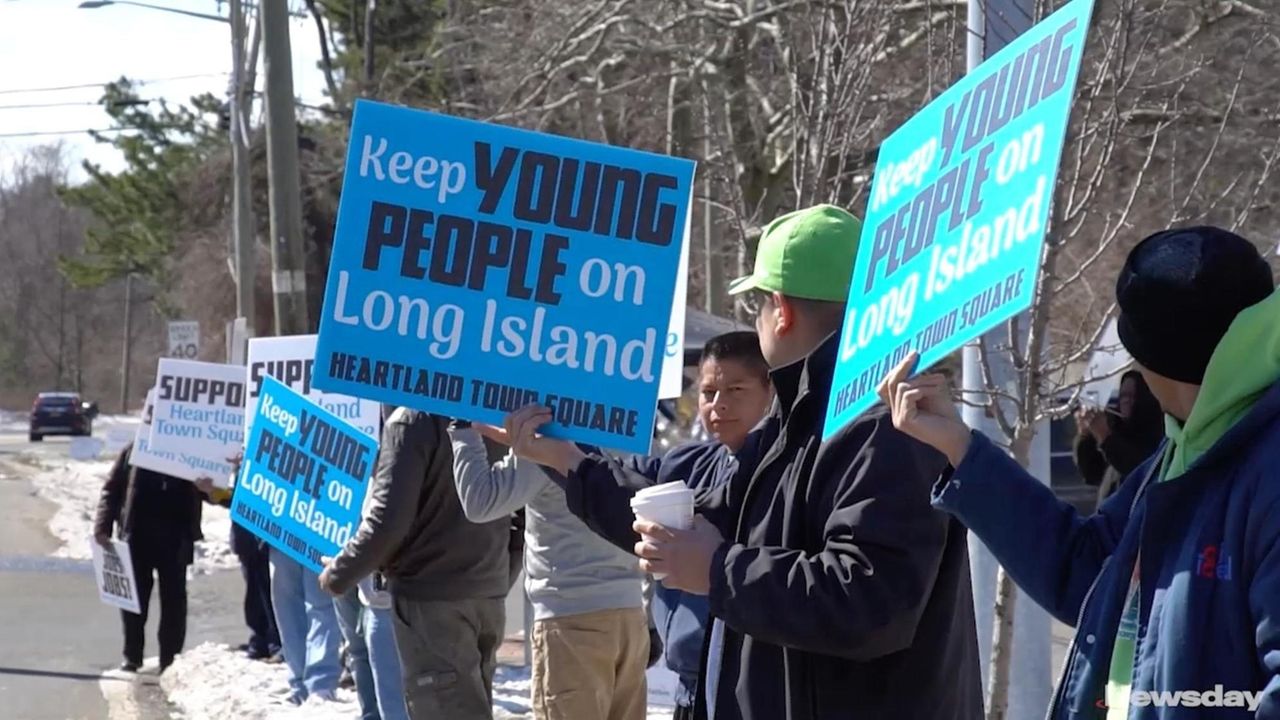 About 100 opponents of the Heartland Town Square development proposal gathered in Dix Hills on Saturday in a show of resistance to the controversial project, which they said would negatively impact local schools, roads and quality of life.

The protesters faced off against about 30 supporters of the immense mixed-use development proposal, who argued it would bring much-needed housing and jobs to the area.

Boosters and opponents waved signs and led chants across the street from the planned Heartland site, the former Pilgrim State Psychiatric Center in Brentwood, where developer Jerry Wolkoff wants to build 9,000 apartments and millions of square feet of office and retail space.

“This is going to change the face of Long Island,” said James Ptucha of Dix Hills, president of the 4 Towns Civic Association, which organized the rally.

Ptucha said the density of the project — which could include up to 10-story buildings — would clash with surrounding neighborhoods of single-family homes and overwhelm local roads with traffic.

He said he would support development at the site on a smaller scale.

Michael Capuano, president of Citizens for a Better Islip, came out to voice his support for Heartland.

“This is the answer to all the problems in this area,” said Capuano, of Oakdale.

Capuano said the development would boost the local economy, and create the type of dense, walkable neighborhoods Long Island requires to keep young people from moving away.

Robert Feliciano, president of the district Board of Education, attended Saturday’s rally. He said Wolkoff had “grossly underestimated” the number of school-age children the development would bring, and that the school district did not have the resources to properly accommodate all of them.

The opposing demonstrations grew contentious, and some Heartland supporters complained that opponents told them to “go back to Brentwood.”

“I feel like there’s some racial undertones to that,” said Patrick Rodrigues, 21, a Heartland supporter, noting Brentwood’s large Hispanic population.

Justin Marino of Dix Hills, board counsel to the 4 Towns Civic Association, said any such taunts were “completely unacceptable” and not representative of the association’s views.

Wolkoff defended his development proposal in an interview Saturday, saying it will benefit the region.

“Is this for everybody? No,” he said. “But people want this.”

Wolkoff said he hoped construction would begin in 2020.

Wolkoff seeks $25 million in Heartland fee cutsHe is hoping to become the first developer to take advantage of a 50 percent discount on Suffolk sewer connection fees for mixed-use projects. LI school officials criticize Heartland projectThe Heartland Town Square development on the former Pilgrim State Psychiatric Center's 450-acre property would ... School district files suit over Heartland projectThe Brentwood school district, a civic association and a local attorney are suing the Islip Town Board and developers of Heartland Town Square, citing concerns about the town's approval of the project's first phase and the potential for overcrowding, according to papers filed in State Supreme Court.