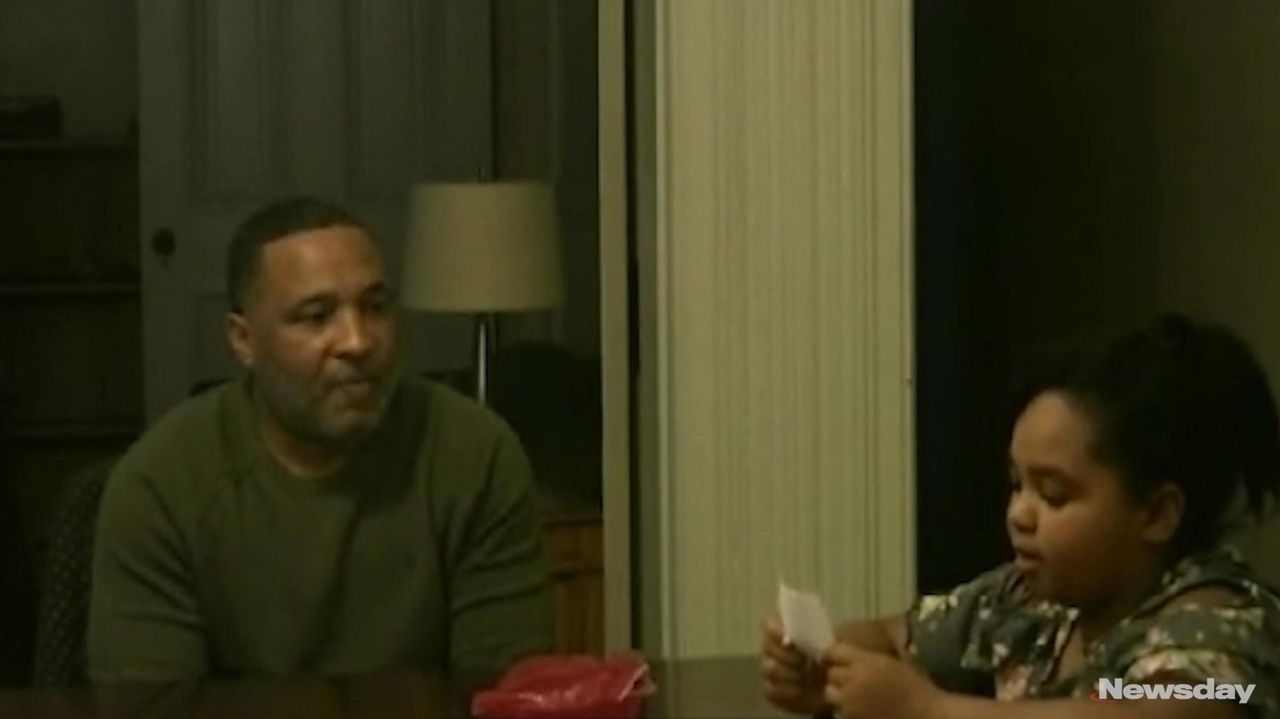 In early February, Keith Thorbourne and his 8-year-old daughter, Jocelyn, traveled to Maryland to meet and interview Lacks' grandson, Alfred Lacks-Carter. Here are a couple of questions Jocelyn asked Lacks-Carter on behalf of her third-grade class at Jefferson Elementary in Huntington. Credit: Kevin Thorbourne

When Kevin Thorbourne began to organize a Black History Month event for his community, he came across a name he’d never heard before: Henrietta Lacks.

What started as a handful of Google searches evolved into a learning experience and a new friendship between two families. In early February, Thorbourne and his 8-year-old daughter Jocelyn traveled to Maryland to meet and interview Lacks’ grandson, Alfred Lacks-Carter. Jocelyn shared a video of the interview Tuesday with her third-grade class at Jefferson Elementary School in Huntington.

Lacks, who died in 1951, is the source of the world’s most prolific human cell line, a living collection of lab-harvested cells used in medical research.

“I’d really never heard of her before,” said Thorbourne, 48, who is director of minority affairs for the Town of Huntington. “But every night, for two weeks, I was learning about her.”

Lacks, a poor, black woman, entered Johns Hopkins Hospital in 1951 for treatment of cervical cancer. She didn’t survive, but the cells doctors took from her — without her consent — did.

The cells reproduced indefinitely in a lab environment — the first human cells to do so — and they continue to multiply to this day, making the culture an “immortal” source of material for researchers.

Known as HeLa cells, they have been used in breakthroughs from the development of the polio vaccine to cancer research. The Lacks family didn’t find out about the cells for more than 20 years and has fought for recognition of Lacks since. Lacks’ story was the subject of a best-selling book in 2010 and a 2017 movie starring Oprah Winfrey.

Thorbourne had hoped to invite Lacks-Carter to speak on Long Island. Lacks-Carter wasn’t able to make it, so Thorbourne and his daughter packed their suitcases. With help from Jocelyn’s teacher Toby Frye, Jocelyn and her dad set off for Maryland with a stack of questions from her classmates about Lacks’ life.

“It was really cool because I knew they didn’t know about Henrietta,” Jocelyn said.

A beaming Jocelyn peppered Lacks-Carter with questions about Lacks’ life while her father and grandfather recorded the interview.

Lacks-Carter said Tuesday he doesn’t often get the chance to share his family’s story with children so young.

“For Jocelyn to be so young and to be so into it — she asked me some very nice questions — it was a good feeling,” said Lacks-Carter, 51, of Owings Mills, Maryland.

Thorbourne said the project was a positive experience for him as well. He and Lacks-Carter exchanged numbers and talk several times a week.

Lacks-Carter will come to visit on March 29, when he will speak at the Cinema Arts Centre in Huntington. Thorbourne plans to pick him up from Penn Station.

“With Black History Month, you learn a lot about Martin Luther King and Rosa Parks,” Thorbourne said. “You don’t always get the opportunity to learn about someone like Henrietta Lacks.”

Black women doctors share dreams, successDr. Allison McLarty knew as a 10-year-old she wanted to become a physician and confirmed that decision after a childhood accident landed her in a hospital. Black History Month: LI school desegregation in photosWhile you're probably familiar with Brown vs. the Board of Education of Topeka, you may not know about the civil rights battles that played out on Long Island. Opinion: My students and I disagree over black historyIt's happened ever since I began teaching as a graduate student in 1991. Most semesters ...