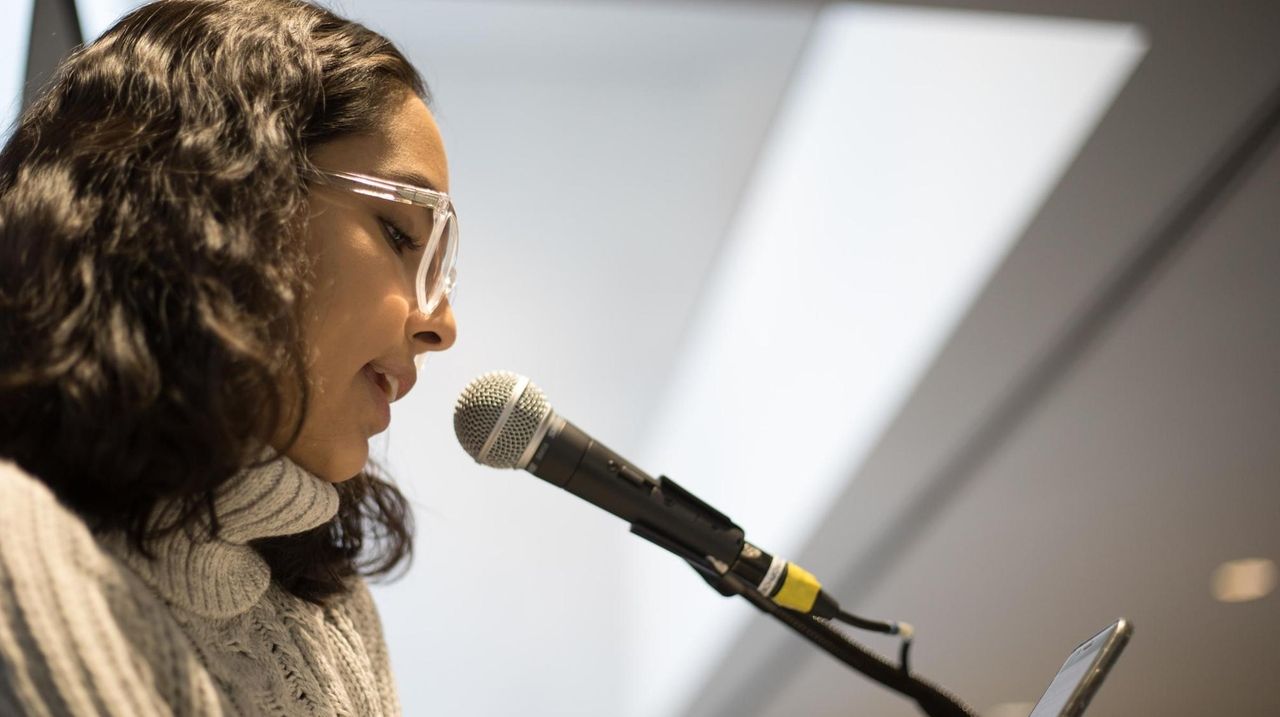 Herstory Writers Workshop hosted a forum at Stony Brook University on Saturday dedicated to the memory of hate crime victim Marcelo Lucero on the 11th anniversary of his death.  Credit: Newsday / Morgan Campbell

From stories of growing up poor to tales of life as an immigrant, student poverty and dealing with racism during childhood, Long Islanders shared  their experiences Saturday at Stony Brook University, hoping to dispel gender and racial stereotypes and help people find common ground.

The third annual Freedom Forum, presented by the Herstory Writers Workshop and more than a dozen partnering groups including the Poor People’s Campaign of Long Island and the Humanities Institute of Stony Brook University, featured stories from forum participants read aloud during a town hall-style story-shaping session. The forum showcased stories, written in weekly Herstory workshops across Long Island, with the goal of bringing them to online platforms to counteract racism, hate crimes and violence.

“The whole idea is to culminate in a brainstorming and call for action about how we can use these grassroots stories as an instrument for justice and change,” said Erika Duncan, founder and director of Herstory Writers Workshop, a community memoir-writing project helping women  and men and girls and boys turn their memories into literary works.

The forum was dedicated to the memory of Marcelo Lucero, an Ecuadorian immigrant who was stabbed to death on Nov. 8, 2008, in Patchogue after he was surrounded by seven youths who authorities said were searching for Hispanics to assault.

Those who attended the forum Saturday said they were excited to have the opportunity to share their experiences.

Belinda Castiblanco, 42, a graduate student studying Hispanic languages and literature at Stony Brook University, read her story titled “Nothing,” which detailed her experiences as a teenage mother with only a high school diploma.

Castiblanco said the forum was important in personalizing the struggles that people from other walks of life go through.

“It’s about connections. When you hear other people tell you what they’ve been going through, it’s amazing to think you could be going through the same things, even though you may not come from the same country or have the same background. But as humans, we all have those connections with families, dreams and hardships,” said Castiblanco, who emigrated from El Salvador when she was 17 years old.

Kris Janvier, 24, of Baldwin, a poet who read a story he wrote about student hunger and poverty from his personal experiences, said it was necessary to discuss such stories considering the current political climate.

“It’s a way of fighting back against injustice, but it’s a smarter way to do it,” Janvier said.

Natalia Chamorro, 37, a  doctoral candidate studying Hispanic languages and literature at Stony Brook, read a story she wrote about the struggles of female advocates fighting for their reproductive rights such as abortion in her native Peru, where the practice is illegal.

“For Herstory to be happening out here and getting people interested, people can see it’s interesting and different to hear a story about a topic that you just hear about in the news. It’s different when you hear it one-on-one from a person. It connects us, it helps us see the person, what they go through, maybe they’re going through the same things I go through,” Chamorro said.

Cuomo: Outdoor graduations of more than 500 people OK with restrictions
Precinct supervisor: 'We thought we had lost' injured cop after suspect stabbed him
1:54
'Let's vaccinate them at the schools': NY's vaccine push focusing on students
Huntington board moves forward with development of senior housing at Indian Hills
State figures: NY nursing home staff lagging in COVID-19 vaccinations
0:50
Farmers market grows on Oyster Bay vendors, residents
Didn’t find what you were looking for?