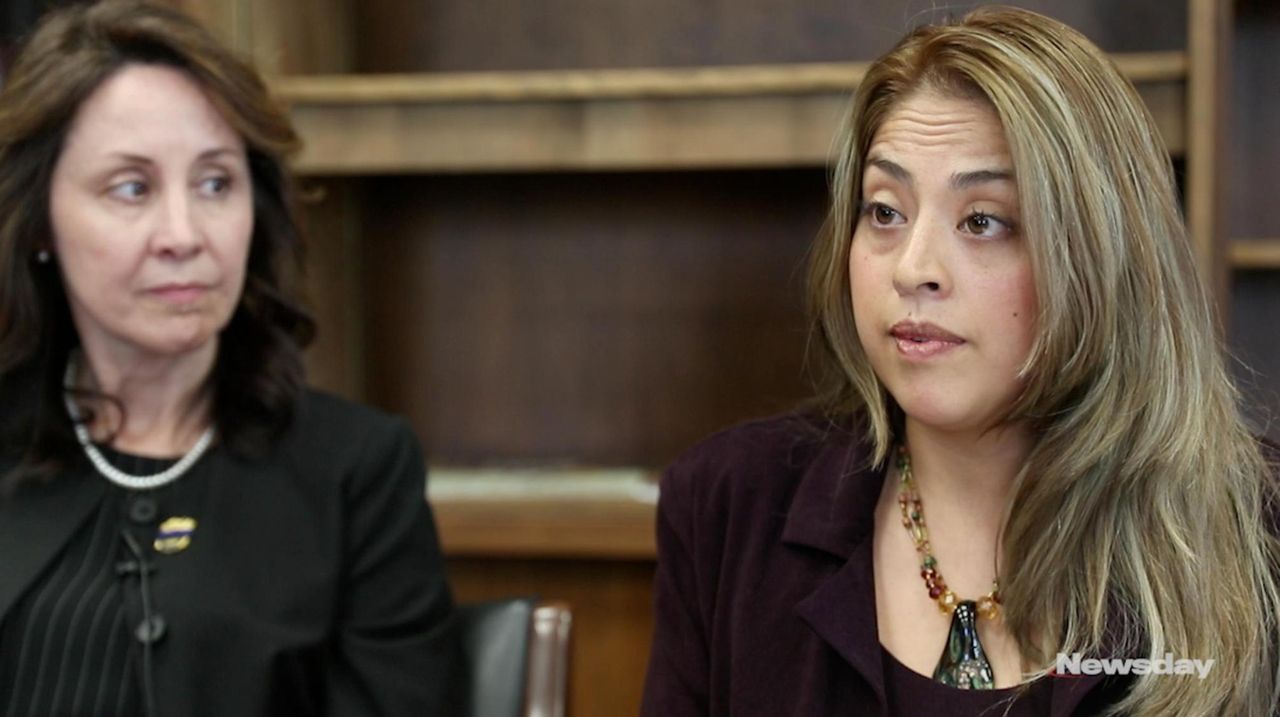 Lizbeth Carillo of Patchogue, an Ecuadorean immigrant, has been appointed by Suffolk County Police Commissioner Geraldine Hart as a civilian liaison to work with the Hispanic community. Credit: Randee Daddona

Suffolk Police Commissioner Geraldine Hart said she has hired a part-time civilian liaison to work with the community as part of the department’s ongoing outreach to the county’s Latino residents.

Lizbeth Carrillo, 31, of Patchogue, will earn $22,044 in the newly created position. She started in mid-September.

Carrillo, who also works for the St. Francis de Sales Parish in Patchogue as its social ministry outreach director and serves on Patchogue’s zoning board, previously worked for Legal Translation Services and volunteered for Pronto Long Island Inc. She immigrated to the United States from Ecuador with her parents when she was 5 years old and acted as an interpreter for friends and family members.

“I can relate to them,” Carrillo said of the county’s Latino residents. “I would like to be the direct line to them and to the police department.”

Hart said she found Carrillo in the summer when she was serving as a volunteer with Fifth Precinct Insp. William Silva, helping engage with Hispanic residents in person and through social media. Carrillo now works at police headquarters in Yaphank.

“She’s about 30 feet from my office,” said Hart, who hopes to make the position full time. “I look forward to her input and her insight.”

Some community advocates said they feared Carrillo would only serve as a mouthpiece for the department and would not be involved in policy discussions.

“We’re happy to have someone looking at this issue” but community groups should have had more input in crafting Carrillo’s role, said Patrick Young, program director for the Central American Refugee Center in Hempstead and Brentwood, adding he hopes Carrillo can affect policy changes within the department and not just be creating “propaganda” multimedia presentations.

Though frustrated they were not part of the selection process, other advocates saw Carrillo’s hire as a positive move. But they cautioned the police department has to work harder with minority residents, 10 years after the hate-crime killing of Marcelo Lucero, who also emigrated from Ecuador.

Suffolk Legis. Monica Martinez (D-Brentwood) said she hopes the new liaison can continue to bridge gaps between the police department and the Hispanic community. “This should have taken place a long time ago,” she said.

“It’s a step in the right direction,” said Martha Maffei, executive director of SEPA Mujer, a Patchogue-based Latina immigrant advocacy group. “I think the intention is good but it’s not enough.”

In her new job, Carrillo conducts “proactive” outreach to county residents, community groups, neighborhood watch associations, houses of worship and local businesses and attends community meetings and events. She will also be responsible for creating multimedia content in Spanish.

Her hire comes amid an ongoing federal review of the department in the wake of Lucero’s killing. The U.S. Department of Justice released its most recent report earlier this month, stating that the department has made substantial progress in some parts of its interactions with the Hispanic community but is still not fully compliant with the terms of a settlement agreement between the two agencies.

Hart said she began her search for a Hispanic liaison in April when she became police commissioner. She said she wanted a member of the Hispanic community who could identify with them while also bringing a “unique perspective” to her staff.

Carrillo said she understands why Latino residents are afraid to report crimes to the police and hopes she can explain to them how the system works. She and Hart have planned videos where police explain how to file hate crime reports or internal affairs complaints. She added that there is a lot of misinformation in the community and she wants to clear some of that up.

“I cannot imagine being a victim and not reaching out because the fear of the unknown,” Carrillo said. “I’m here working for my community and the minority community.”