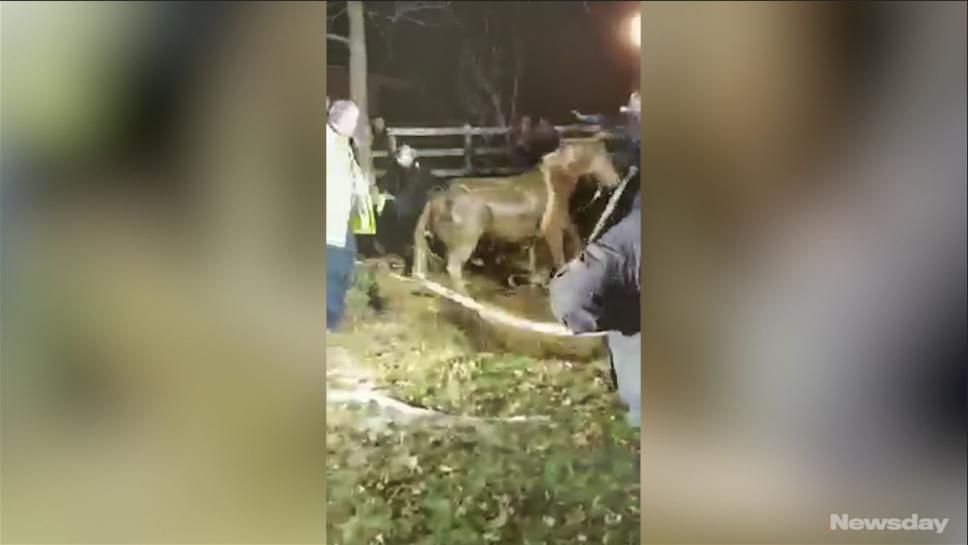 Santino, her Quarter Horse, fell up to his neck into a cesspool on Thursday, but was hauled to safety.

That was two years after Overbeck paid $700 to a Louisiana slaughterhouse for Santino, or ‘little saint.” One day later, the sorrel would have been trucked for three days without food or water to Mexico, she said.

Overbeck was returning 6-year-old Santino to his North Great River stall when the earth opened up, she said in an interview Friday.

“The whole thing just collapsed, taking him down, he’s struggling and flailing,” said Overbeck, 56, who co-owns Santino with her fiance, Angelo Buonomo, 69, who named him. The cesspool was still full of waste.

“I was afraid I was going to fall in,” Overbeck said. “It was so steep, he would never get out on his own.”

Buonomo called 911. Trying to calm Santino, Overbeck slipped a lead under his neck — and lay down on it, trying to keep his head above water.

“They were unbelievable,” Overbeck said.

Islip Terrace firefighters “pumped out waste and water that was threatening to drown Santino,” police said.

Rescuers, including neighbors, first tried to dig Santino out. Then the police enlisted Michael Barrasso, president, Barrasso & Sons, a nearby concrete block maker.

Barrasso, with two of his workers and a front-end loader, dug a 5- to 6-yard ramp. Fire hoses were wrapped around Santino’s front and back legs and under his belly. Firemen and police slowly pulled the horse upright and got his front feet onto the ramp in order to slowly get him up and out, Barrasso said.

Equine vet Nicholas Tallarico checked Santino over, giving him a tetanus booster, antibiotics and an anti-inflammatory.

His temperature, which had been too low Thursday, is back to normal. He has a cut on his head and some scrapes and bumps, said Overbeck, who is carefully monitoring him.

“I can tell he feels a little crickety in his front legs, but there is no swelling.”

Despite his rough start, “he’s absolutely the sweetest thing going.”