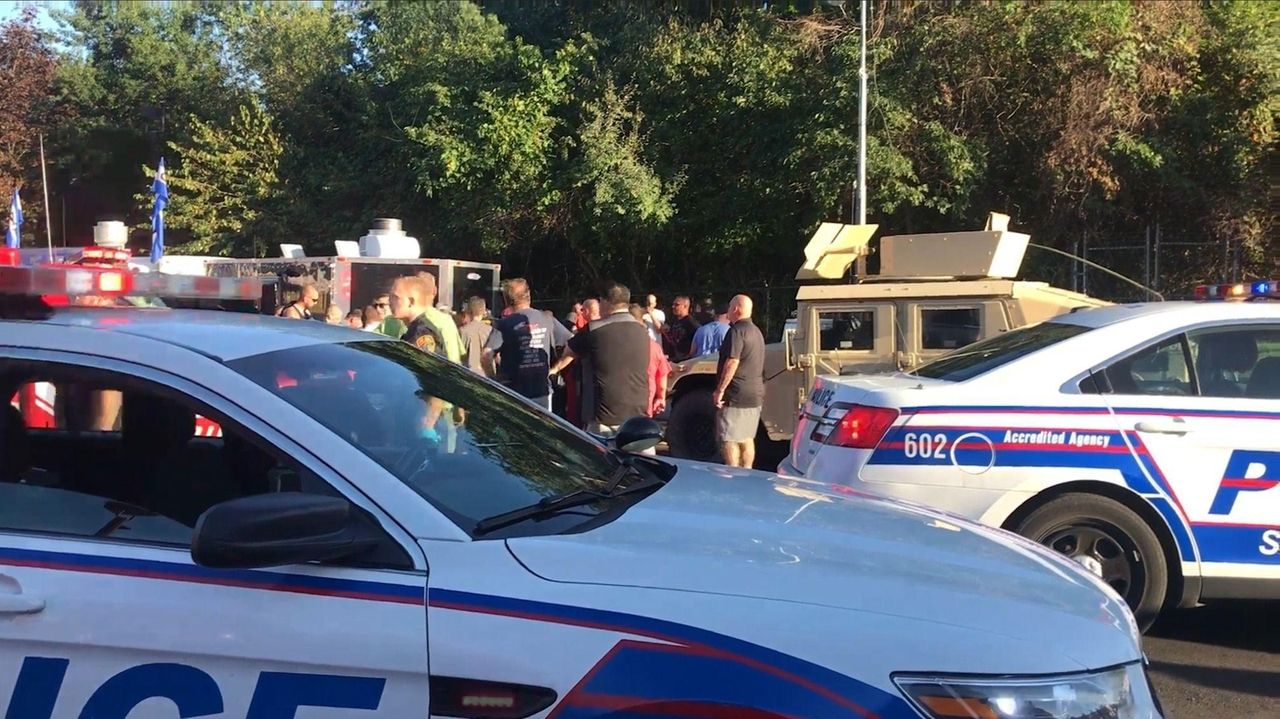 A military Humvee on display at a Farmingville festival suddenly careened down a hill and into a crowd of people Saturday evening, Sept. 23, 2017, seriously injuring a woman, police and witnesses said. Credit: Stringer News Service

The condition of the woman injured when a military Humvee rolled down a hill and into a crowd at a Farmingville festival has been upgraded from critical to serious — but her brother said she will be dealing with her injuries for years to come.

Doctors at Stony Brook University Hospital were forced to amputate a portion of Suzette LaMonica’s lower left arm after the parked Humvee went out of gear and pinned her against a food truck at the Long Island Bacon Bash, said Gregory Miglino, LaMonica’s brother. LaMonica, 46, of Brookhaven, also underwent surgery Monday to treat injuries to her left leg.

“We have a large family and a tremendous support network of friends, but long-term she will need assistance and she is obviously in tremendous pain,” Miglino said.

Suffolk County police are investigating the incident at the Brookhaven Town-owned Pennysaver Amphitheater at Bald Hill, said Sgt. Michael Flanagan of the department’s Sixth Squad. Flanagan said the cause of the crash remains undetermined.

The U.S. Army Reserve, which brought the Humvee to the festival, on Monday said it is conducting an internal investigation and will cooperate with the police probe.

“We regret this unfortunate incident and we pray for all that are affected,” the Reserve said in a statement. “It is extremely important to us to understand what has happened. Any speculation at this point without having all the details could affect the outcome of the investigation.”

Miglino said LaMonica lost a lot of blood immediately after the accident but had stabilized by Monday afternoon. Doctors are concerned about possible infections, he said.

Miglino said reports that a GoFundMe page has been established for his sister are untrue. “Nothing has been authorized by the family,” he said. “All we are seeking right now are prayers.”

Another person injured in the accident, meanwhile, said he first thought the accident was an act of terrorism.

Richard F. Gherardi, 30, of East Hampton, recounted his experience in a telephone interview Monday while recovering from second-degree burns suffered when hot oil from deep fryers splashed onto the back of his legs.

Gherardi said he was helping to prepare bacon-infused items for the event when the accident happened.

“I thought it was terrorism, with all the panic in the crowd,” Gherardi said. “I thought it was a bomb or something at first, then I saw about 15 to 20 people pushing the Humvee back. I thought someone had intentionally released the gear.”

Gherardi’s wife, Casey, 31, an intensive care nurse at Southampton Hospital, and two other workers also were inside the trailer at the time of the crash, Gherardi said.

Gherardi said that shortly before the crash occurred about 5 p.m., one of the two workers was outside the trailer cleaning a table while chatting with LaMonica. The worker was called back inside the trailer and then everything happened.

“No more than 10 seconds later I was looking out of my window with my back to our deep fryers and I see panic going on, screaming,” Gherardi said. “I yelled, ‘Everybody out of the truck! Something’s going on!’ ”

Gherardi said that “simultaneously” he heard a “large bang” and the trailer was pushed about 10 feet into a gyro truck behind it.

Some of the workers in the trailer fell on top of each other, loose contents of the trailer went everywhere, and then everyone ran out the back door, Gherardi said.

Bystanders who came to LaMonica’s aid “were keeping her focused and talking to her until paramedics and EMTs showed up.” He noted his wife was among those helping LaMonica.

Gherardi’s wife also told him to get some ice from the trailer to put on his legs, Gherardi said.

“In front of our service window alone there were about 50 to 60 people on line,” Gherardi said. “Our heavy trailer kind of acted like a wall when it was hit,” he said, adding that if it wasn’t there he believes the Humvee would have struck more people.

Gherardi said that for all involved, things could have been a lot worse.

“You definitely put life in a little bit of perspective,” Gherardi said.