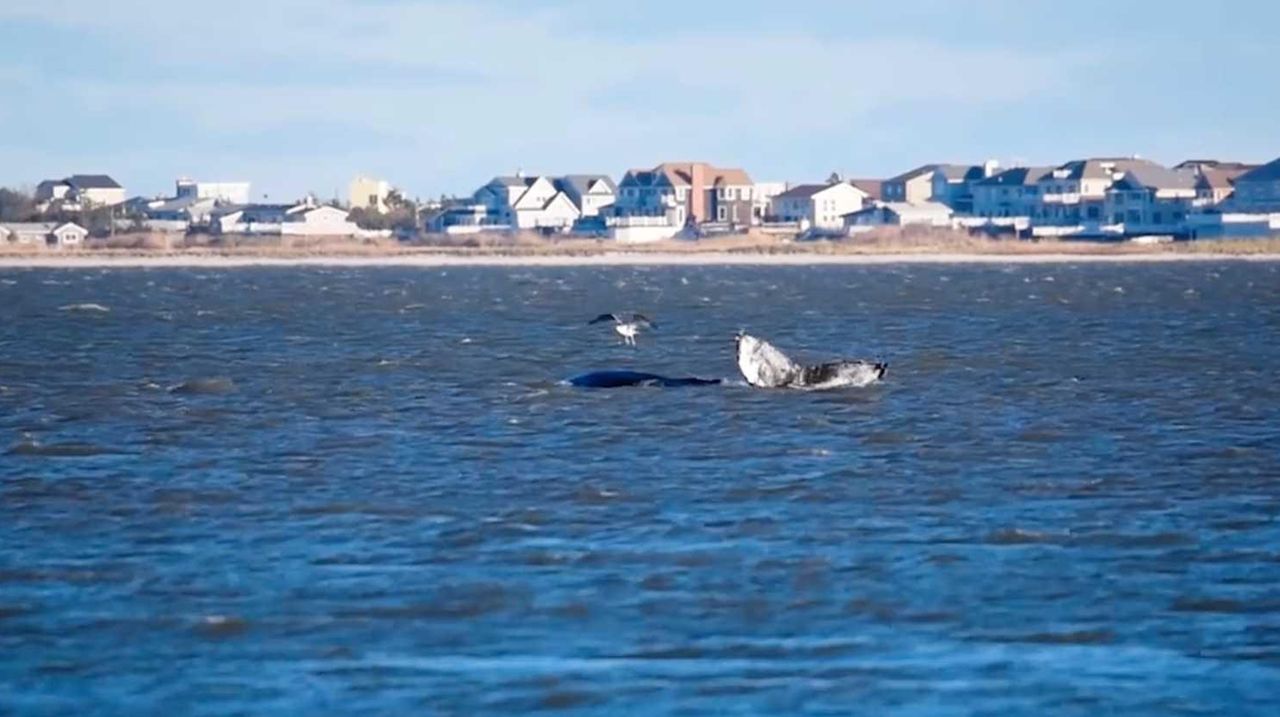 Dozens of people stood on the shore of Moriches Bay on Tuesday, Nov. 22, 2016, with cameras and binoculars trained on a humpback whale grounded on a sandbar since Sunday night. Suffolk police and state environmental conservation officials were also present to assess the whale's condition. Credit: News 12 Long Island, Tom Lambui

A 25-foot humpback whale remained stranded on a sandbar in Moriches Bay Tuesday, drawing dozens of people on the shore, hopeful for a rescue.

But the onlookers, many with cameras and binoculars, were disappointed. Officials from the National Oceanic and Atmospheric Administration said Tuesday they will not try to move the whale, which likely has internal injuries.

Deborah Fauquier, stranding and emergency response coordinator, said NOAA was sending additional personnel to the scene and preparing for the possibility of euthanizing the animal.

“If they felt that the most humane action was euthanasia and if it were safe to euthanize, then the team would be deployed as soon as possible on that,” she said.

A veterinarian who specializes in treating large whales will be on site to assess the animal Wednesday morning, NOAA said.

Mendy Garron, NOAA’s marine mammal stranding coordinator, said attempts to move whales in similar situations are often unsuccessful and result in injuring the animal or the animal restranding itself.

“At this . . . time, the most humane option is to let the animal remain in its current state, while minimizing any human activity around it or disturbance,” she said. “Our goal once the medical team is in place is to make the animal more comfortable and end its suffering if it is safe for the whale and responders to do so.”

A statement Tuesday from Gov. Andrew M. Cuomo’s office said he would “provide any equipment necessary from the Department of Environmental Conservation” to help move the whale. “The‎Governor understands that any chance of survival should justify the maximum effort and he is committed to providing it,” the statement said. “As a fisherman and boater, the Governor knows the Moriches Inlet and believes it may be possible to get the whale to deeper water.”

NOAA said it is in contact with the Cuomo administration, but that its plans have not changed.

The whale was seen stuck in Hart Cove, off East Moriches, on Sunday. Riverhead Foundation biologists went out in boats to monitor the animal’s condition and create waves in an effort to move it. The effort, done with the support of the Southampton Town Bay Constable and the state Department of Environmental Conservation, was unsuccessful.

The whale was seen swimming in the bay last week “exhibiting behaviors that are consistent with feeding,” the Riverhead Foundation said. While it is unusual to see humpback whales in Moriches Bay, they are commonly seen off the South Shore of Long Island.

“It’s been stuck there for two days now. Something should have been done earlier,” Fleet said.

Coast Guard and DEC boats lingered near the animal Tuesday afternoon. Three privately owned vessels and a barge, equipped with an excavator, floated farther away.

Personnel onboard the barge were planning to dig a hole next to the whale to help the animal dislodge itself, but were told by NOAA officials they could not proceed with that plan, according to Mike Trovitch, who owns the vessel.

Trovitch said he plans to keep the barge in the bay “until NOAA allows me to go in there and assist the whale or until the whale passes.”

The Riverhead Foundation warned that the size of the whale, estimated to be 25 feet long and between 15 to 20 tons, and its “current stressed condition” make it “very dangerous” and the public should not go near it. Federal law states the public should safely observe wild marine animals from a distance of at least 150 feet away.

Several onlookers continued to wait on the shore even as the sun set and temperatures dropped.

Jennifer Proscia of Floral Park sat on a guardrail with her hands stuffed in her pockets and a heavy towel draped over her legs for warmth. She had been at the bay since 11:30 a.m., hoping to see the whale rescued.

“It breaks my heart to see such an intelligent animal, hungry and sick and likely going to die,” she said.