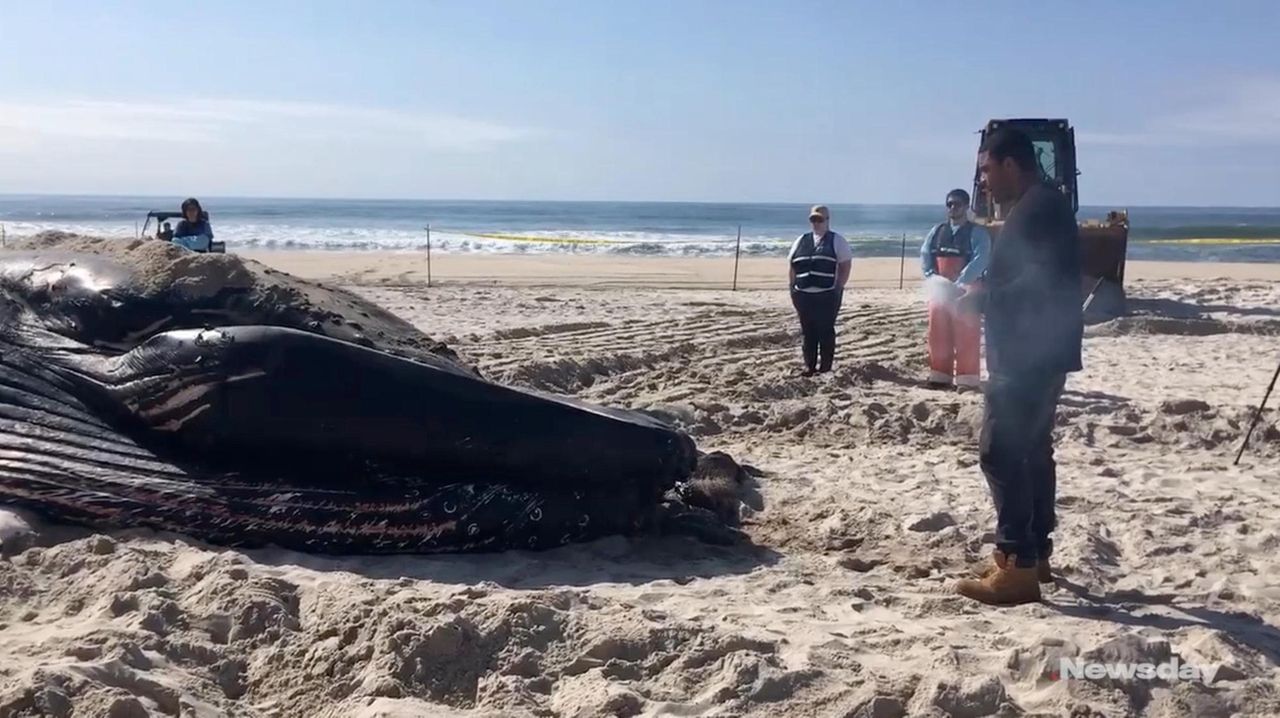 The 37-foot humpback found stranded in Westhampton — the first large whale beached in New York this year — had skull fractures and “extensive” bruising, discovered in a necropsy Tuesday, authorities said.

The whale, at 6 to 8 years old not quite a mature female, was blessed in a Shinnecock ceremony before it was examined, then buried at Cupsogue Beach County Park, where it had been found dead Sunday.

The mammal otherwise had been in good condition, with healed scars around its tail, but it may have been hit by a vessel, according to the Atlantic Marine Conservation Society, whose scientists conducted the hourslong necropsy. Samples taken of the mammal will be sent to a pathologist to find out more about the cause of death, said the group, based in Hampton Bays.

At the beach barely two hours after dawn, on land that belonged to the Shinnecock Indians before European settlers arrived, about 10 members of the tribe honored the whale. Shane Weeks, a keeper of Shinnecock tradition and a culture consultant, burned sage to cleanse the humpback and the area and sang a blessing in an Algonquin dialect.

“By singing for it, it allows that spirit to move on,” said Weeks, 29, of Southampton. “We’re helping it go to the next life.”

Scientists hope they can find out more about this humpback. Its tail flukes showed signs of a previous entanglement, and photos of them may help the conservation group learn more about the young female.

“The humpback whales we see stranding on our shores are typically juveniles,” said Kimberly Durham, the nonprofit’s necropsy program director. “This is a much larger animal than we typically see. Because of its size, there may be a chance the Center for Coastal Studies may have documentation of this animal. Part of the examination includes taking photos of the fluke, which helps identify the animal. We will be sharing these photos with our partners to see if we can learn more about the animal’s history.”

Weeks said he has been at almost every whale beaching from Queens to the East End in the past few years to honor the whales, two of which adorn the seal of the Shinnecock Nation.

Whales are symbols of strength to the Shinnecocks, who long ago hunted them for food, and when one was freshly beached, it was considered a blessing because it was a food source, Weeks said.

At one time, whales beached more frequently, until overhunting and other factors lessened such occurrences, Weeks said.

But since 2016, humpback whales have beached or been found dead in what federal officials call an “unusual mortality event.” Since then, 93 humpbacks have beached along the Atlantic Coast, including 17 in New York, according to National Marine Fisheries Service.

“As one of the elders put it, the whales are starting to come back home,” Weeks said. “Now we’re starting to see more live whales and with that comes the whale beachings.”

The keeper of Shinnecock traditions said he plans to continue blessing whales that wash ashore.

“In keeping with our tradition, I like to carry that on into the future,” Weeks said, “not just so that the outside world knows that we’re still here, doing what we’ve always done, but also to carry that torch for our people.”

The public is asked to report injured and deceased marine mammals and sea turtles to the NYS Stranding Hotline at 631-369-9829. Sightings of marine wildlife are helpful and can be shared with the conservation group by emailing sightings@amseas.org.