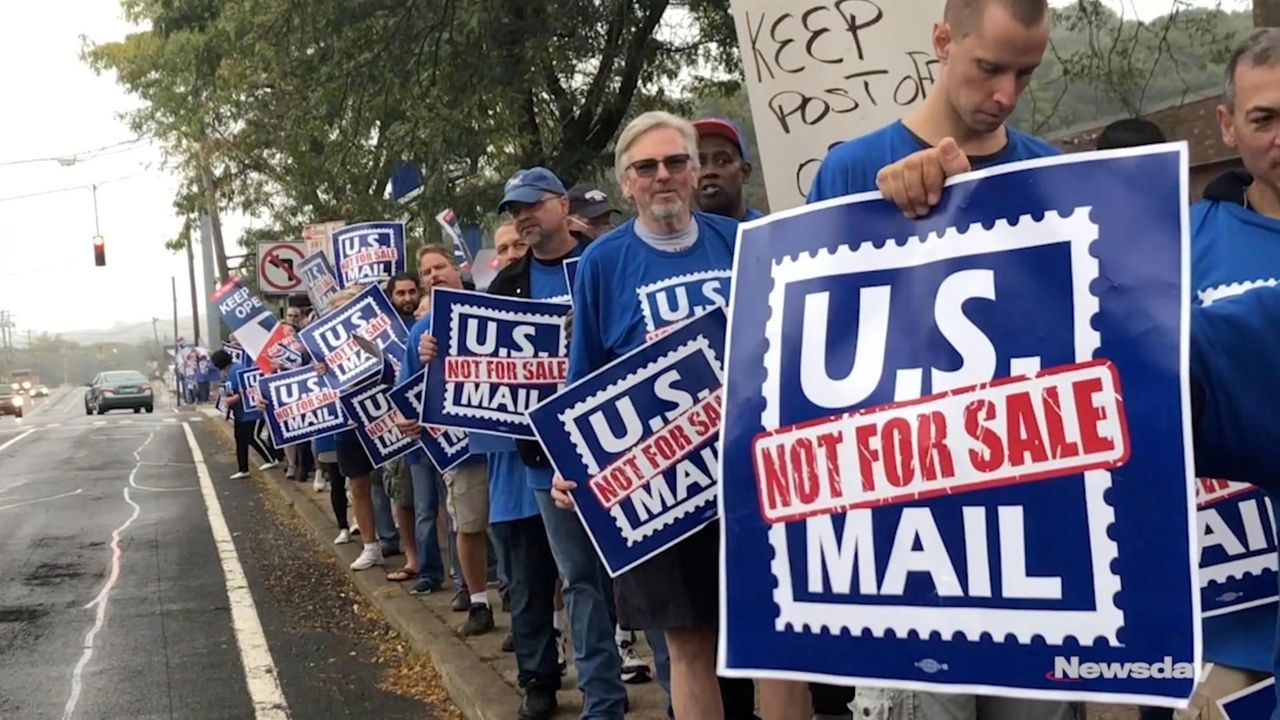 Employees rallied outside the Huntington Station Post Office on Monday to protest the privatization of the U.S. Postal Service. The Office of Management and Budget announced the proposal to privatize in June. Credit: Howard Schnapp

About 250 Long Island postal workers rallied outside the post office in Huntington Station Monday, joining a nationwide protest against the privatization of the postal service.

At 140 gatherings nationwide, workers rallied against a June proposal by the White House’s Office of Management and Budget to privatize the U.S. Postal Service, according to a news release from the National Association of Letter Carriers.

In Huntington Station, workers chanted “U.S. mail, not for sale” and wore matching blue shirts with the slogan printed on them.

Walter Barton, president of the National Association of Letter Carriers Branch 6000 in Amityville, said the move would eliminate jobs and would hurt residents and small businesses that depend on daily delivery.

“If you go private, you don’t know what you’re going to get,” Barton said. “A company, just to make a profit, could hire anybody.”

David VanderWerf, who delivers mail in Seaford, led the chant with a megaphone.

“If a private company takes over, it could mean a massive loss of jobs,” said VanderWerf, 50, of Bethpage.

In April, President Donald Trump ordered the creation of a task force to study the postal service, saying the agency is on an “unsustainable financial path” and “must be restructured to prevent a taxpayer-funded bailout," according to The Associated Press. The task force was assigned to study factors including the USPS' package delivery pricing. The task force has not yet released its recommendations, the National Association of Letter Carriers said.

In June, a separate report from the Office of Management and Budget said the  postal service “has no clear path to profitability” and called on the agency to follow the lead of some European countries that have privatized the service.

“We’re not waiting to see the task force report. The administration has already indicated where they’re headed,” American Postal Workers Union President Mark Dimondstein said in the news release. “Private companies are going to raid the precious resources of the people’s Postal Service, which has only grown more valuable due to the growth of ecommerce.”

There are currently resolutions in the U.S. House of Representatives and Senate to keep the USPS “independent” and “not subject to privatization.”