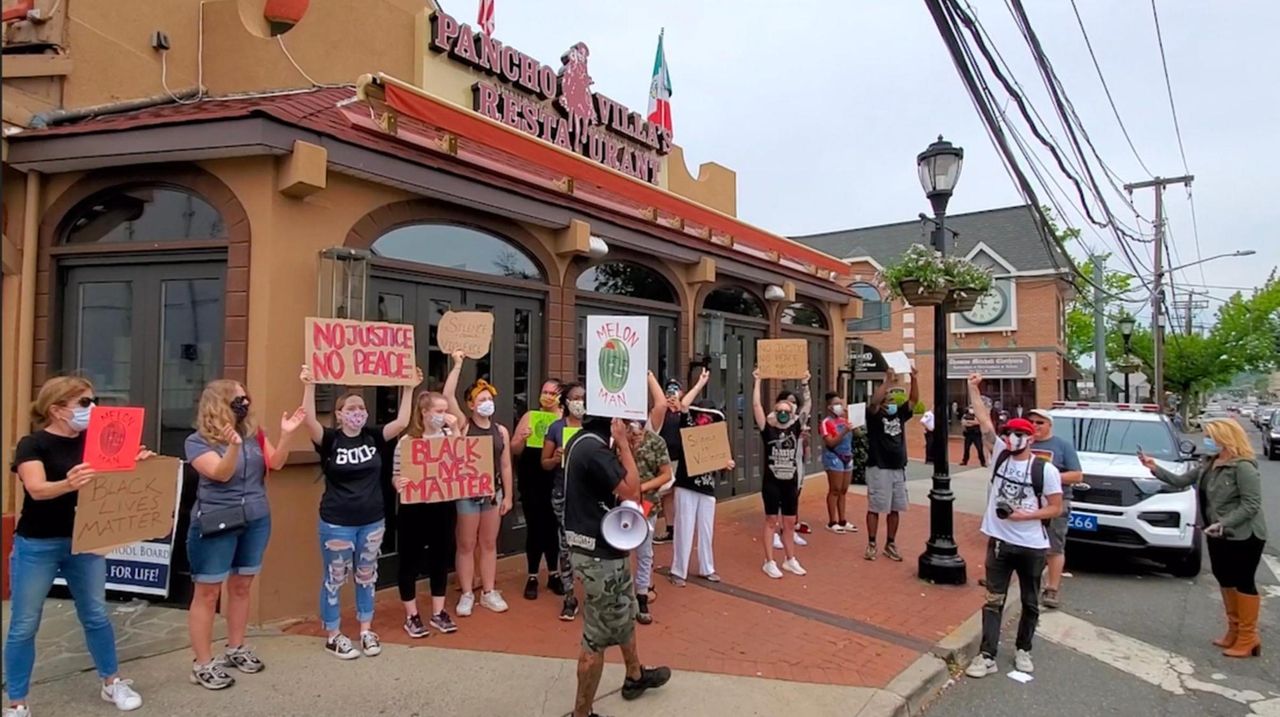 Demonstrators gathered outside Pancho Villa's Restaurant in Huntington on Wednesday, two days after the owner was seen on a Facebook video that included racist comments about protesters, made by the owner of another nearby restaurant. Credit: James Carbone

Day three of peaceful protest against racism in Huntington came with a twist, a moment of silence and finally an apology.

On Monday a group of marchers, mostly young people from Huntington, peacefully marched along New York Avenue to bring attention to police brutality. Petrone, live on Facebook, walked near the marchers and warned business owners to “be careful” and called the protesters, “punks” and “little animals, savages.”

He also said, “a bunch of us,” were going "to throw watermelons at them.” Included in the video was Augie Abbatiello Jr., co-owner of Pancho Villa’s Mexican restaurant.

The remarks were met with condemnation from residents, the business community and politicians as well as demands for an apology.

“It is with great humility and remorse, as well as deep regret that I profusely apologize to my family, my friends and the community of Huntington, Long Island, who I love so much,” the statement, released late Wednesday by representatives of Petrone, said. “I am truly embarrassed and ashamed by my words and actions towards those I have hurt, especially those young men and women who were peacefully protesting in Huntington on June 1st.”

The apology went on to say he takes full responsibility for his words. He says he is going to take action to become a better human by listening and learning from others.

Petrone released his statement after a group of people gathered in the parking lot of the Big H shopping center in Huntington Station, set off for downtown Huntington marching for an end to racism, inequality and to stop police brutality.

In Petrone’s Facebook rant he also said Monday’s marchers looked like they had arrived on buses from the area around the Big H shopping center.

But  Khari McNeil, of Huntington Station, organized the protest because he’s tired of living in fear of losing his life. He’s 20.

"I don’t want to end up dead,” he said. “I don’t understand why people fear me as a person, they don’t know me, I’m a very loving person.”

Once protesters arrived in downtown Huntington they literally stopped traffic at the intersection of Main and New Streets where they knelt and had a moment of silence. Only a couple of motorists heckled the demonstrators, telling them to go away.

Earlier in the day marchers showed up in front of Pancho Villa’s restaurant to protest the racist Facebook post.

Abbatiello showed up and this time he was the one who brought food: snacks and water for the protesters to eat and drink. Demonstrators on Tuesday brought watermelons to their protest.

Abbatiello said he came to support the protesters, apologize and show he wanted to do better. He maintains he did not realize what Petrone said in the video.

“I denounce everything Louie said on the video,” he said. “I should have spoken out earlier but I’m here for the community, I apologize.”