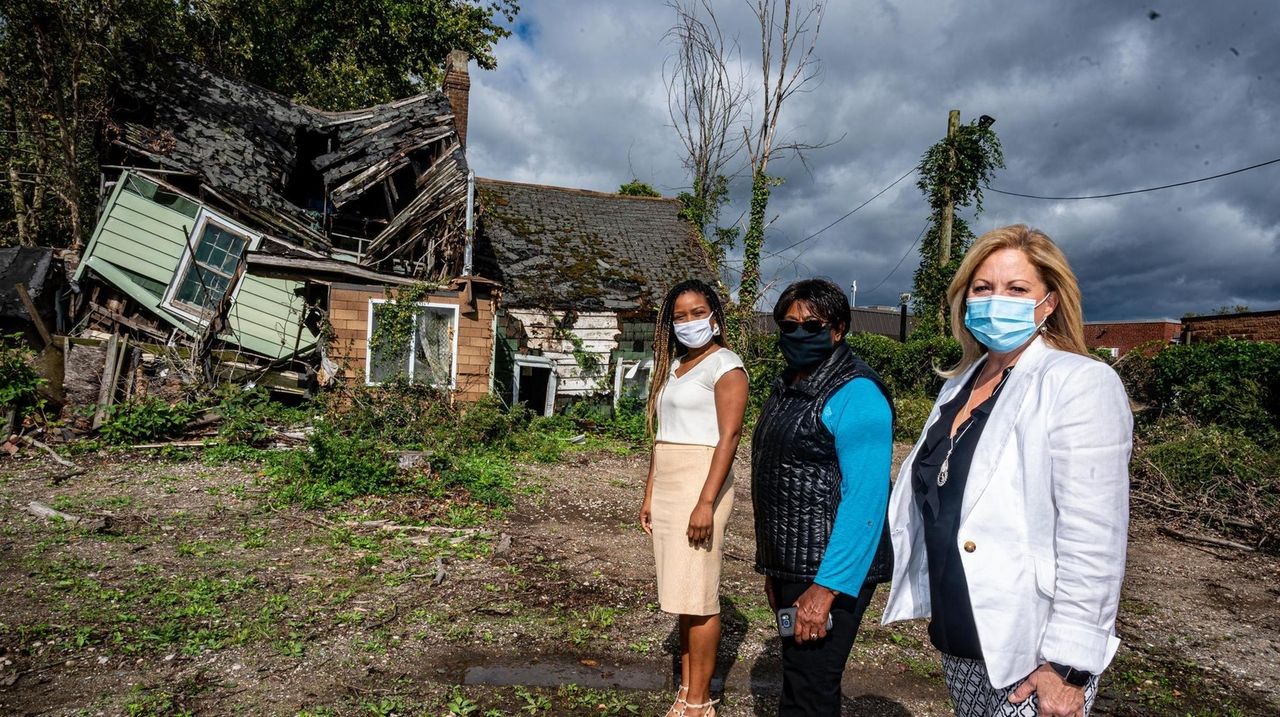 Town board member Joan Cergol, right, with Irene Moore, center, and Jennifer Leveque stand near the home of former slave Peter Crippen. Huntington officials say they are going to try and save the home that was slated to be demolished. Cergol says the outcry over tearing down the house spurred an effort to find a place for a monument to honor Huntington’s Black pioneers. Credit: J. Conrad Williams Jr.

Backlash over plans to demolish the home of one of Huntington’s 19th-century Black community leaders has sparked a plan to commemorate the town’s other noteworthy Black residents.

Town officials have established a committee to come up with a public art project and site to commemorate Huntington’s Black history, including the achievements, contributions and service of known and unknown African-American residents.

Town board member Joan Cergol came up with the idea following debate over the demolition of the Peter Crippen House on Creek Road. The home had been approved for demolition in June because it had been deemed beyond repair.

Crippen, a former slave and a founder of the oldest African-American church in the town, bought his property in 1864. The town purchased it in 2017 from Crippen’s descendants for $75,000.

"There was tremendous outcry in the community that said, ‘please try to do what you can to save this thing,’ " Cergol said. "That was a very symbolic event for me."

Plans to demolish the Crippen house have been put on hold. Town officials said they are going to do an archaeological dig and seek funding to save the structure.

Cergol said she understood the importance of the house and people’s attachment to it because it represented a part of Huntington’s history that people are proud of and do not want erased.

The unrest over racial injustice that began sweeping the nation in the spring also spurred her desire to lead an effort to recognize Black pioneers.

"It got me thinking that we need to do more to address the thirst for understanding and paying tribute to our African-American history," Cergol said.

Members of the African American Historic Designation Council and the Public Art Advisory Committee will team up and lend their expertise to the project. Both are town-organized volunteer groups. Input will also come from other members of the community.

The committee, comprised of about 20 people, met for the first time on Sept. 24.

"When the town board gets involved in a positive way it can help alleviate tensions and there have been some tensions," Moore said. This summer, following the death of George Floyd in Minneapolis, a group of young people were peacefully protesting in Huntington against police brutality when they were mocked and threatened with violence by a local restaurant owner on Facebook Live.

Jennifer Leveque, a member of the recently established community organization Leaders of the New School, which has a seat at the table of the new committee, said she is pleased that town officials are taking on this initiative.

"There is a part of me that does feel that we shouldn’t have had to wait for something to happen to spark this discussion but where we are right now aside from that, I think that the only way to move the needle is to meet everyone where they are," she said.

Cergol said she hopes to put out a request for proposal to hire an artist by year's end.

The African American Historic Designation Council recommends sites, structures and buildings, or districts of African American historical significance to be considered as historic landmarks or landmark districts to the town’s Historic Preservation Commission.

The Public Art Advisory Committee is responsible for facilitating advice and community input in the selection of sites, artists and artwork for participation in public art initiatives.