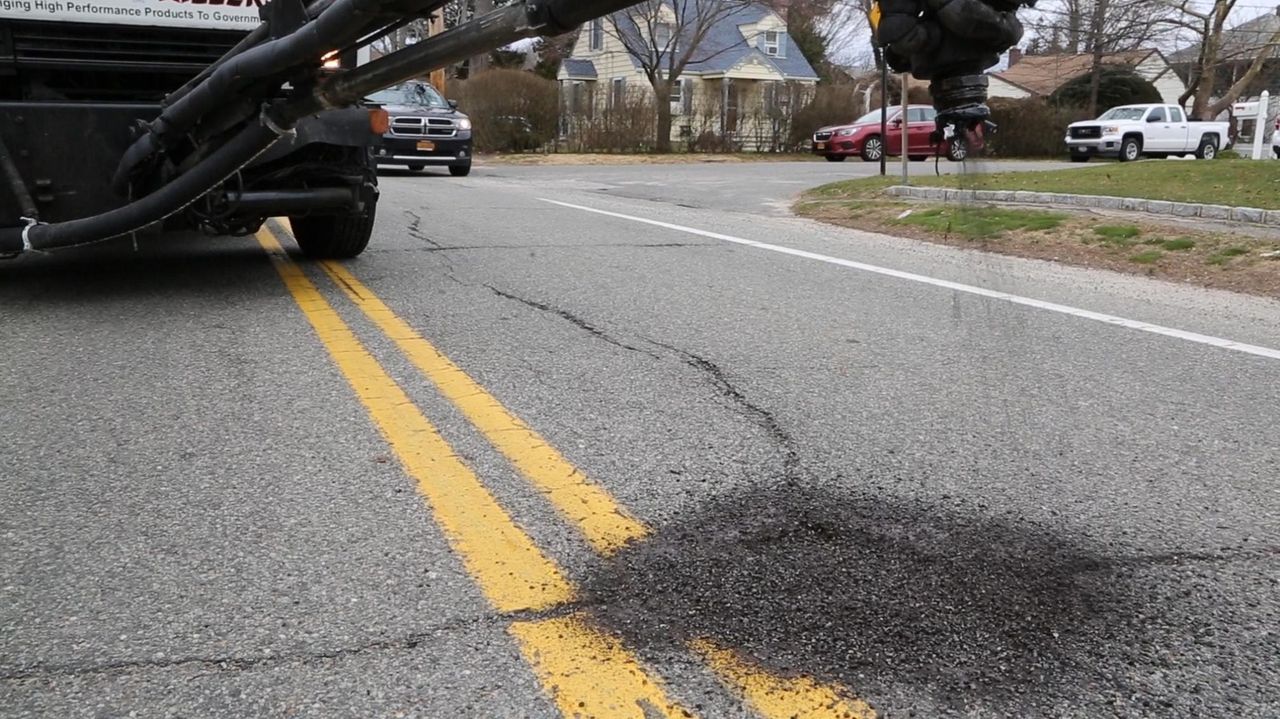 The Town of Huntington, on Monday, March 5, 2018, unveiled a state-of-the-art machine to temporarily fix a pothole within  minutes, and without having anyone leave the inside of the truck. Credit: Barry Sloan

Representatives of Fairless Hills, Pennsylvania-based Patch Management offered their four-step repair program to the town to try out. The process uses a specially equipped truck to fill potholes in 60 to 90 seconds, Patch officials said.

The town now uses a three-person crew to fix potholes by simply using shovels to fill the holes with asphalt, with no preparation of the surface or coating, Huntington Highway Superintendent Kevin Orelli said.

“We’ve been repairing potholes for probably 50 years using the same method ” said Orelli, who was joined by Town Supervisor Chad Lupinacci at a demonstration in East Northport Monday. “So we want to bring the town of Huntington into the 21st century and use a new, more efficient method for doing that work.”

The Pothole Killer program allows the driver to stay in the relative safety of the truck cab and go through the spray injection patcher process: blow dust and debris out of the pothole, spray a layer known as a tack coat to help the asphalt adhere, fill the hole with heated liquid asphalt and then put a thin layer of dry aggregate on top.

“Traffic will be able to drive on this immediately,” Scott Kleiger, chief engineer and consultant for Patch Management’s Pothole Killers, said. “It takes on average no more than a traffic light cycle to fix a pothole.”

Orelli said that so far this year, the town has filled over 2,000 potholes, at a pace of about filling 40 potholes a day The town’s manual pothole patches last a couple of months, Orelli said, costing about $2,000 per day for crew and equipment.

Patch Management officials said the Pothole Killer system can restore 100 potholes a day with repairs lasting on average three years. Orelli said using the system would cost about $2,500 per day.

The town will test the program over the next couple of weeks, evaluate the cost and make a decision on whether to contract with Patch Management. The cost of the two-week trial is $25,000 for one truck and driver.

“This is going to be cost saving, it’s more efficient using modern technology,” Lupinacci said. “It will also help stretch the life span of the roads until we can pave the roads completely.”

If town officials decide to move ahead with a contract, workers with Patch Management, not town employees, would operate the Pothole Killer truck.