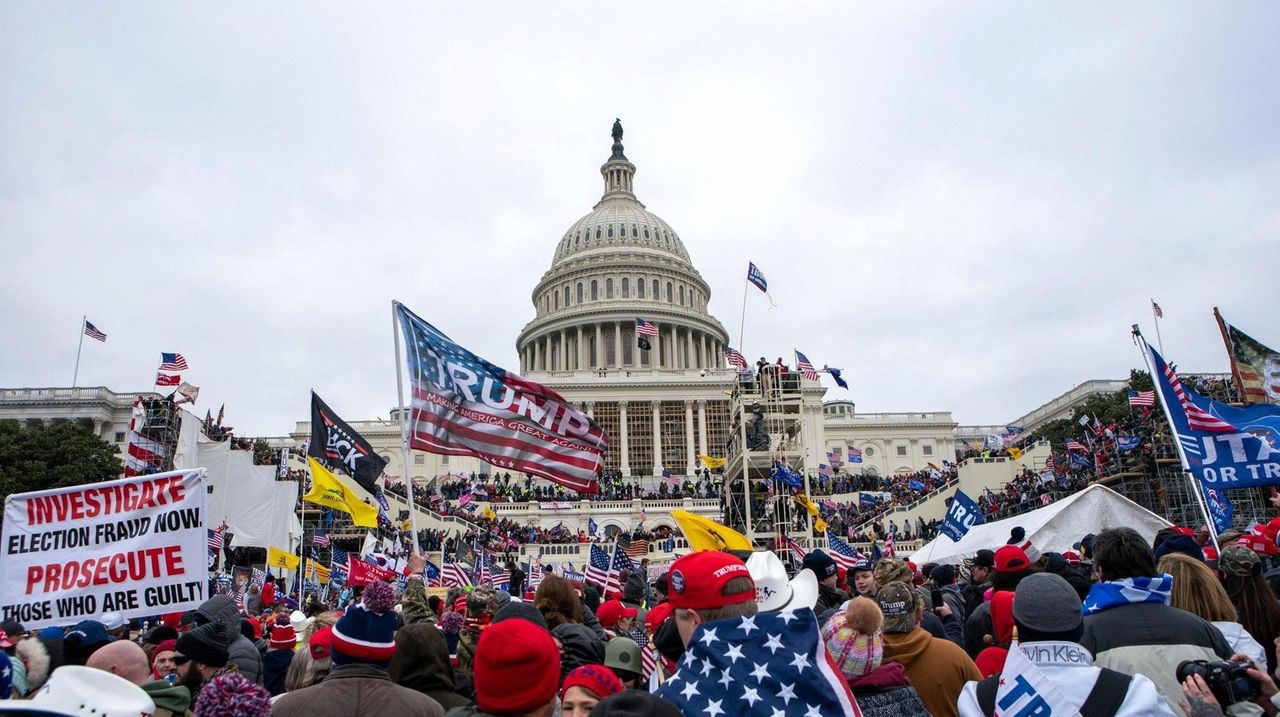 On the first anniversary of the Capitol riots, Long Islanders in Huntington on Thursday spoke about how it has affected voters today. Newsday's Faith Jessie reports. Credit: Jeff Bachner, Kendall Rodriguez

Voting rights advocate Lisa Sevimli said she wanted to do something proactive on the one-year anniversary of the insurrection at the U.S. Capitol, a day she said is as significant to American history as the Fourth of July.

Undeterred by the cold and a lot of driving, the Holtsville resident started her day in Huntington Station at the "Peace at the Polls; A Vigil for Democracy" rally organized by the League of Women Voters of Huntington, and planned to end the day in Riverhead at a similar event.

"We almost lost our democracy last year on this date...," she said. "I think it’s important to remember those who died and the people who saved our democracy."

Last year thousands of supporters loyal to then-President Donald Trump, stormed the Capitol angry over the results of the presidential election.

On Thursday, about 50 people joined the League for a two-hour rally on the corner of West Jericho Turnpike and Route 110 with its message of saving American democracy by protecting the vote. Attendees received scattered support from motorists honking their horns as they drove by. Members of the Babylon and Nassau chapters of the voters league also attended.

The aim of the rally was to advocate for federal legislation that protects voting rights, specifically the John Lewis Voting Rights Advancement Act, The Freedom to Vote Act and The Protecting Our Democracy Act, organizers said.

"We picked today because it’s a day of remembrance; it was today [a year ago] that people attacked the Capitol and tried to stop our democratic process," said Lizbeth Thalheimer, chapter president.

Just after 1 p.m. a police vehicle from the Second Precinct arrived to surveil the peaceful gathering. Thalheimer said the League had received some concerning comments on Facebook from the far-right group the Proud Boys on a post announcing the rally, so they contacted police as a precaution.

Police said they monitored the event as well as stopped by.

No Proud Boy members came to the location, police said. Additionally, police said the league provided them with screenshots of the comments that did not rise to the level of a threat.

Jayette Lansbury of Huntington Station said she came because the simple act of voting is at risk. "Right now early voting and other voting rights are being questioned to make it harder to vote," she said. "If we are a true democracy everyone deserves the right to vote if you are an American citizen."