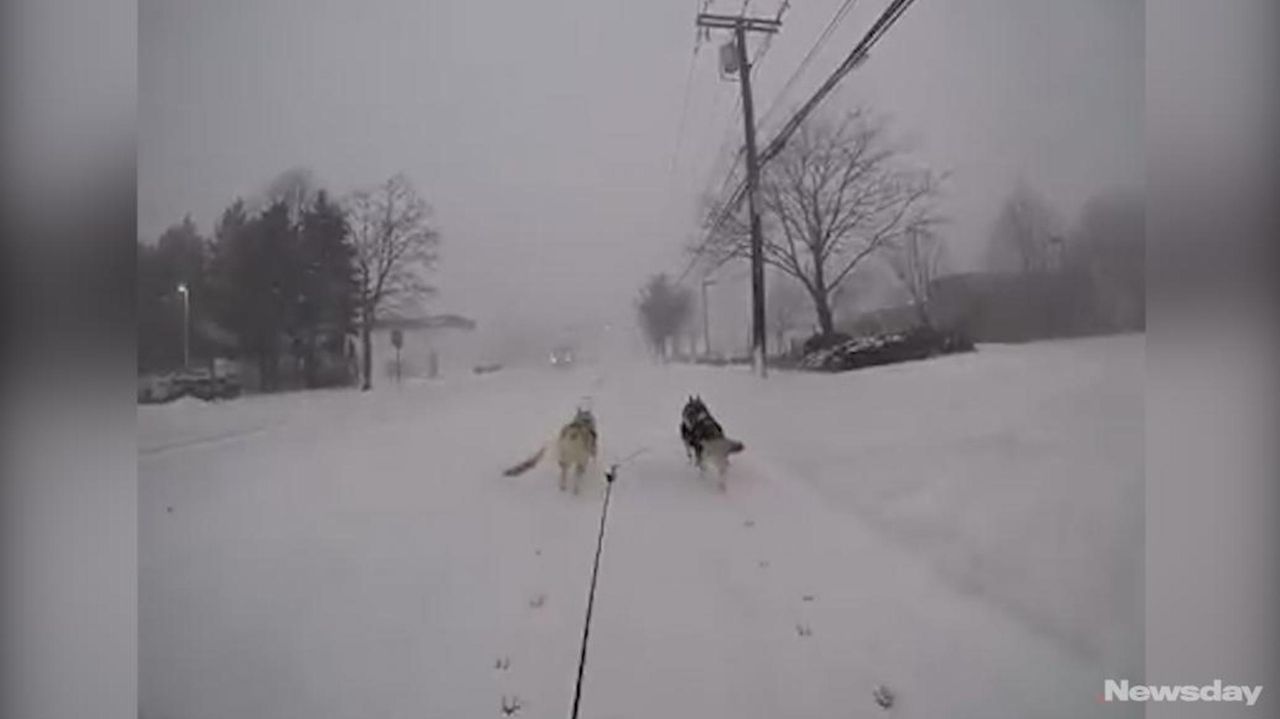 While many people hunkered down Thursday, Paul Kearney and his dogs couldn’t wait to get outside.

Kearney, 47, an Islip dog trainer, and his two high-energy Siberian huskies, Summer and Tucker, regularly go on long hikes, but bikejoring — a sport in which dogs help pull a bicycle, also called urban mushing — is their favorite.

Thursday morning, Kearney posted video of himself, dogs tethered on a long lead to the front of the bike, traveling down Larkfield Road in East Northport. The clip was viewed 234,000 times and shared more than 3,000 times by Friday night.

“I think it was because of the storm. It wasn’t just me flying through the woods, it was on a road people knew,” he said. “I was doing something that I guess people find amazing in a big storm.”

Kearney said he has been training dogs and learning how to mush since 1993. He’s been bikejoring for fun with Summer and Tucker for about six years, he said.

With bikejoring, Kearney uses mushing commands to keep the dogs organized but Kearney doesn’t let them do all the work. He said he enjoys the exercise, too, and pedals with them. As a group, their average speed is about 12 mph.

“We got up really early when there were fewer people and less salt” Thursday, he said. “It’s great that people are smiling because they got to see it.”

In the 2-minute clip, Kearney, Summer and Tucker travel past shopping centers and a few plows on the largely empty road. The group goes for several blocks before stopping at Fifth Avenue and Larkfield Road to take a break.

On Facebook, commenters expressed surprise, saying they wished they’d seen it in person.

“They must have been so happy. Husky’s do husky things,” read one comment.

“My only concern is the cars!!! some people don’t know how to drive!” another commented.

Cyclists who otherwise follow state and local laws are allowed on public roads, according to state law.

Kearney said he typically sticks to quiet side streets, but when the dogs headed toward Larkfield, he decided to go for it.

They didn’t stay out for long, Kearney said, and soon headed back to less busy streets.

Roy Gross, SPCA chief, said that while he wouldn’t necessarily condone the practice, pet safety would only be a concern if the dogs are overworked. Some dogs are suited to biking with their owners, but it depends on the circumstances.

“A good strong healthy husky could withstand a lot more,” Gross said. “Breed, age, condition, that all comes into play.”

Kearney said his dogs have received years of extensive training to do it safely even on trails. He said he chooses times and locations to put his dogs’ safety first.

“This is really a do-not-try-this-at-home type of thing,” he said.