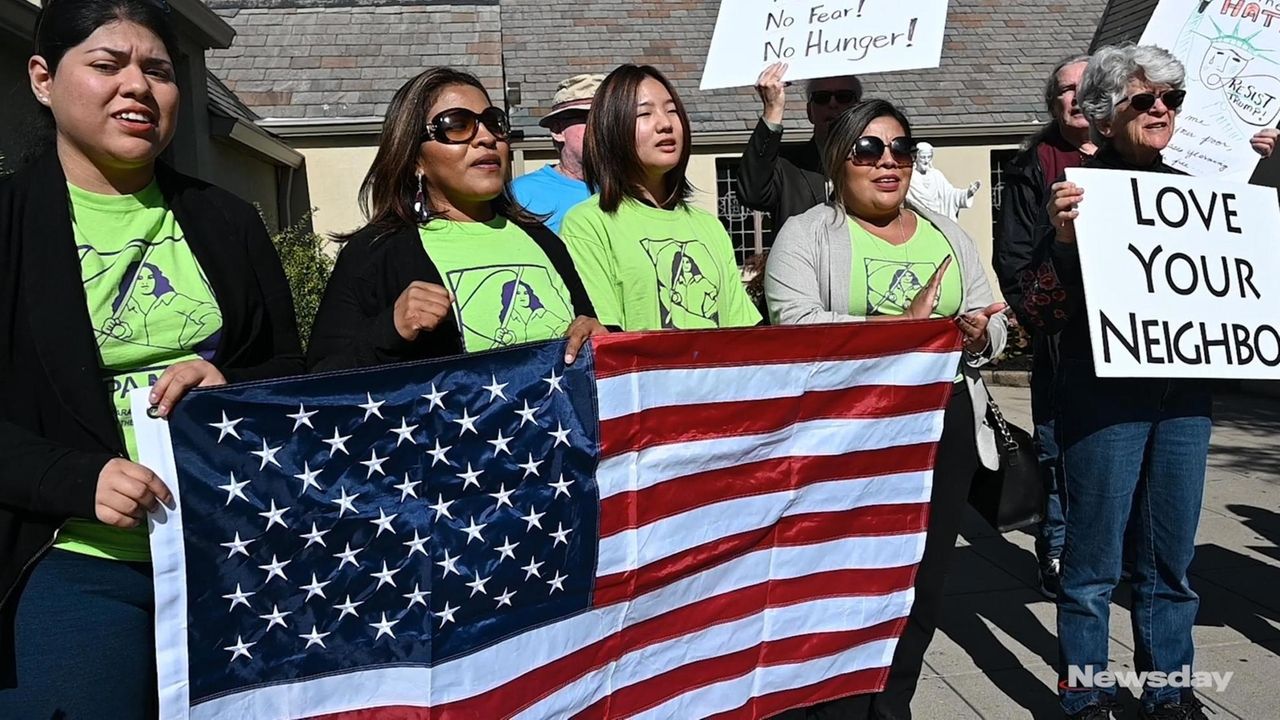 Advocates and public officials on Tuesday denounced a Trump administration “public charge” rule to withhold green cards from immigrants who receive public assistance such as Medicaid, but hailed a court order stopping the measure.

More than two dozen people gathered outside of Our Lady of the Miraculous Medal Roman Catholic Church in Wyandanch, holding signs reading “Nobody should go hungry,“ and “Families belong together, Stop terrorizing immigrants.”

“These public charge regulations are just another cruel attempt to scapegoat, to intimidate immigrants, to propagate the falsity that these are takers and not givers, that they are freeloading off public services,“ said the Rev. William Brisotti, pastor of the church.

“It’s a diabolical effort on the part of government,“ he said.

Cheryl Keshner of the advocacy group Empire Justice Center said, “Immigrants are not our enemy and are not milking the system as the Trump administration would like us to believe. Immigrants are hardworking and contribute to our society and our economy.“

The Trump administration policy, announced in mid-August, would make it more difficult for immigrants to be approved for a green card if they have received benefits such as Medicaid, housing assistance or food stamps, or are deemed likely to receive them in the future.

Federal immigration policy has long allowed authorities to consider the degree to which a green card applicant might be a financial burden on the government. The administration’s move expands the definition of what it means to be a “public charge.“

On Friday, federal judges in three states issued temporary injunctions against the Trump administration public charge rule that prevented it from taking effect on Tuesday.

The White House issued a statement on Friday stating, “The rulings today prevent our nation’s immigration officers from ensuring that immigrants seeking entry to the United States will be self-sufficient and instead allow noncitizens to continue taking advantage of our generous but limited public resources reserved for vulnerable Americans.“

But speakers at the news conference said the move was aimed at punishing hardworking immigrants, and deterring immigration from areas such as Latin America.

They said they had seen a noticeable drop in immigrants seeking government assistance for fear of being denied a green card.

Dwayne Gregory, presiding officer of the Suffolk County Legislature, said the policy was creating a “climate of fear, chaos, isolation and intimidation.“

Many immigrants are afraid to apply for food stamps, seek medical attention, or even participate in the census, he said.

Patrick Young of the New York Immigration Coalition said that on a deeper level the policy, along with other Trump administration initiatives, was aimed at transforming the ethnic makeup of the country.

The Trump administration has denied that, and said it was seeking to enforce immigration laws, and reduce the financial burden that some immigrants placed on the country.

Carmen Maquilon, director of immigrant and refugee services for Catholic Charities in the Diocese of Rockville Centre, said, “We welcome this injunction because it is a common-sense action. … For now at least, the American dream continues to be open.“

4:01 COVID-19: From 799 deaths in one day to path back to normalcy
3:04 Nassau DA: Doctor charged with murder in death of 5 patients
State sees decreasing virus positivity, but LI yields higher rate
Brookhaven dumps plan to build ashfill to collect burned trash
Port Authority: Airport travel down 73% from pre-pandemic times
44:58 Panel: Standardized tests must inform instruction
Didn’t find what you were looking for?