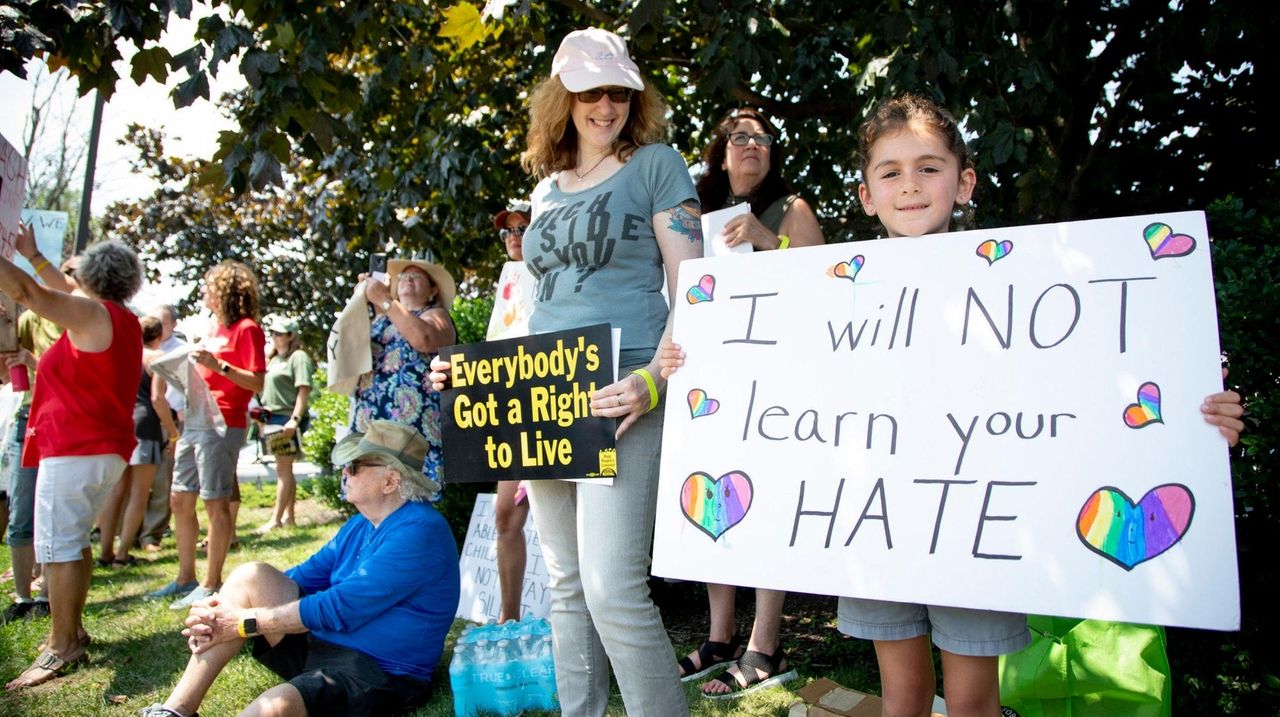 A broad coalition of religious, medical, immigrant rights and activist groups came together for the eighth time on Saturday in Huntington Station to protest what they call the inhumane treatment of children and families seeking asylum in the U.S. Credit: Newsday / Yeong-Ung Yang

“By violating children’s rights, we’re putting a stain on our history,” said Pilar Moya, 49, of Greenlawn. “If my grandchildren ever ask me where I was when this was happening, I want them to know I stood up.”

A report this month by the Department of Homeland Security’s Office of Inspector General cited “dangerous” overcrowding at some of the detention centers and said children often did not have access to showers for days, slept on floors and were kept in dirty clothes.

President Donald Trump said July 16 that unspecified “people” who had visited the detention centers “said they were very well-run, very clean, very nice for the children.”

The rally on all four corners of the busy intersection of Jericho Turnpike and State Route 110 in Huntington Station, which attracted more than 120 people, was the eighth protest on detention-center conditions in just over a year by a coalition of about three dozen organizations.

The theme of Saturday’s rally was “Don’t Look Away!” — a plea to the public and politicians to not forget the plight of migrants, said Dr. Eve Krief, 50, a pediatrician from Centerport and co-organizer of the protest.

“They need to pay attention, because this country is committing real human rights violations,” Krief said.

Many drivers honked their support or gave a thumbs-up, while others shouted their disapproval, with one yelling “Make America Great” and another exclaiming, “Sieg Heil.”

Anuradha Magee, 53, of Greenlawn, said she hoped the repeated protests would educate residents about the issue and spur them to contact the Island's congressional representatives to back legislation mandating more humane conditions for migrants.

On June 27, Long Island's four House members — two Democrats and two Republicans — voted for a border-funding bill bereft of key migrant-protection provisions that many Democrats had supported. Leading House progressives assailed the bill; House Speaker Nancy Pelosi said she reluctantly agreed to it “to get resources to the children fastest.”

Sharon Golden, 70, a rally co-organizer, said she worked in her psychotherapy practice in Hewlett with adults who were traumatized as children and believed that kids in the detention facilities — some separated from their parents — would be permanently scarred by the conditions they were living in.

“This will be something that needs healing throughout their lifetimes,” she said.