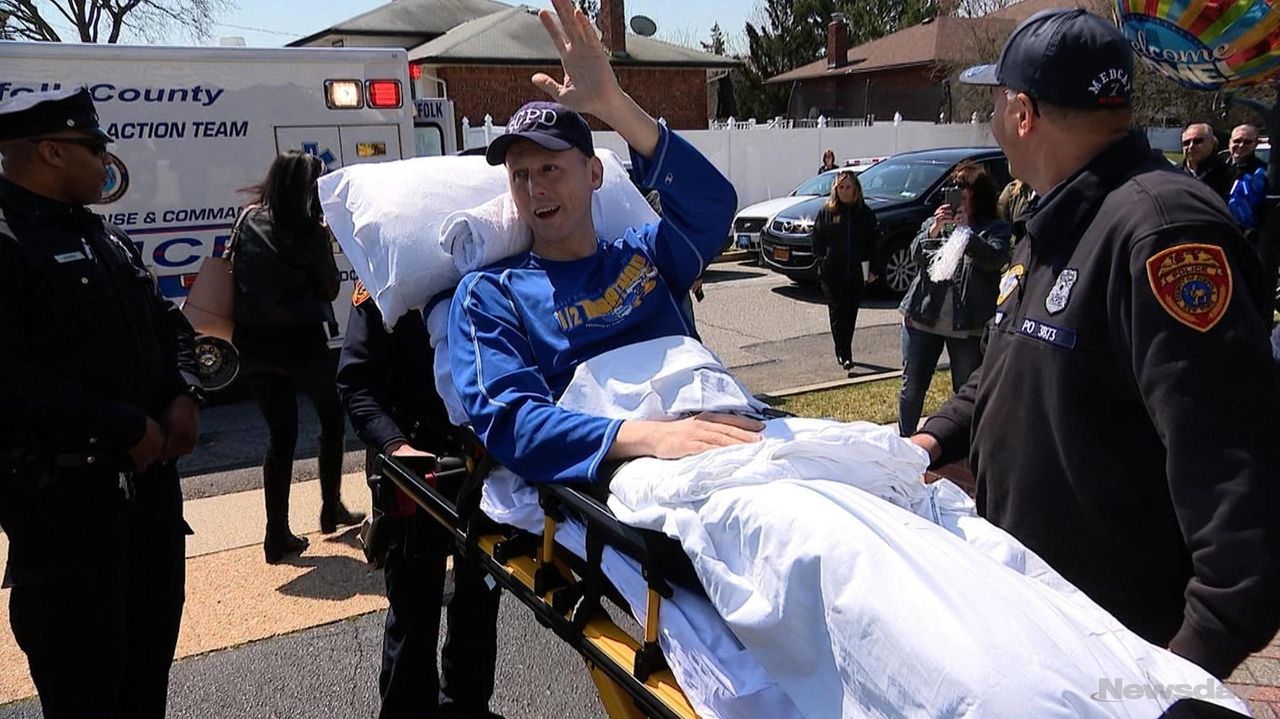 Dozens of Suffolk County police officers lined the suburban street and a great cheer went up from the crowd as they welcomed home one of their own from the hospital a month after his cruiser was struck by a suspected drug-impaired driver. Officer Don Dillon suffered a shattered pelvis, fractured hip and broken leg when a car slammed head-on into his police vehicle March 13, police said. The 45-year-old officer, who served nearly 20 years on the job, had been in the hospital and rehab since. Credit: News 12 Long Island

Balloons of blue, orange and red bobbed in the front yard. Dozens of Suffolk County police officers lined the suburban street, some in dress blues, others more casual.

A great cheer went up from the crowd as they welcomed home one of their own from the hospital, a month after his cruiser was struck by a suspected drug-impaired driver.

Officer Don Dillon suffered a shattered pelvis, fractured hip and broken leg when a car slammed head-on into his police vehicle March 13, police said. The 45-year-old officer, who served nearly 20 years on the job, had been in the hospital and rehab since.

On Wednesday, he was welcomed back to his Farmingdale home, Suffolk County Police-style. His ride from Glen Cove Hospital was escorted by police motorcycles, their lights blazing. Police cars blocked off his street, and when the ambulance carrying Dillon came around the bend, the hollering began.

Inside the ambulance, Dillon, seeing the homecoming throng, turned to his wife, Christine, and said, “What have you done?”

She had told him a few people might be there to greet him.

Then came her husband, lifted from the rear of the vehicle in the ambulance stretcher. He wore a dark blue Suffolk police ball cap.

“Thank you, thank you,” he said to the crowd, again and again, adding, “This is so overwhelming. I’m so grateful to the police, and friends and family. This is so much more than I deserve.”

The marathon runner has months of physical therapy ahead, his wife said. It’s unclear whether he can return to the force and he’ll have to recover in a hospital bed moved into his living room.

Wednesday, though, was a day of joy for the Suffolk police community, as well as a glimpse of their private lives. A sense of camaraderie pervaded the moment, as well as an understanding of the importance of having a fellow officer’s back.

Family friend Denise Turetsky, whose husband is a retired detective, said the officers wanted him to know how happy they were at his homecoming. “We think he needs a big deal,” she said.

During Dillon’s month away, officers and their spouses helped baby-sit his kids, delivered a cargo jet’s worth of comfort food, and visited him often.

Family and friends took his kids — Andrew, 10, and Catherine, 14 — to ballgames, talents shows and movies.

This was one of Christine Dillon’s happiest days in weeks, and she was beaming. Just a month ago, she was at her Manhattan sales job when she received the call every cop’s wife dreads.

“Your life changes in a minute,” she said.

The NYPD escorted her straight to her husband, who was seriously injured when a vehicle struck his cruiser in West Babylon. Police say Louis Mancini Jr. had stolen a GMC Yukon and lost control as he drove at a “high rate of speed,” slamming into the cruiser head-on.

Mancini, 30, of West Babylon, was charged with more than 25 offenses, including driving while ability impaired by drugs and grand larceny. He pleaded not guilty in the pending case.

But Wednesday was all about Dillon’s homecoming.

After her husband was back inside his house, Christine Dillon reflected on the moment. “We’re celebrating his life, as opposed to the alternative,” she said. And as the crowd dispersed, she added: I haven’t met all these people before, but now they feel like family.”

NY virus positivity continuing to decline amid push to return to normalcy
LIPA accelerating efforts to lower taxes on its power plants
Feds on new unit's mission: 'Rooting out discrimination in all its forms'
1:39
Suffolk Marathon to return as an in-person race
Amazon Fresh filing shows planned Oceanside store
2:20
Coalition calls for Nassau Police Commissioner Patrick Ryder to resign
Didn’t find what you were looking for?