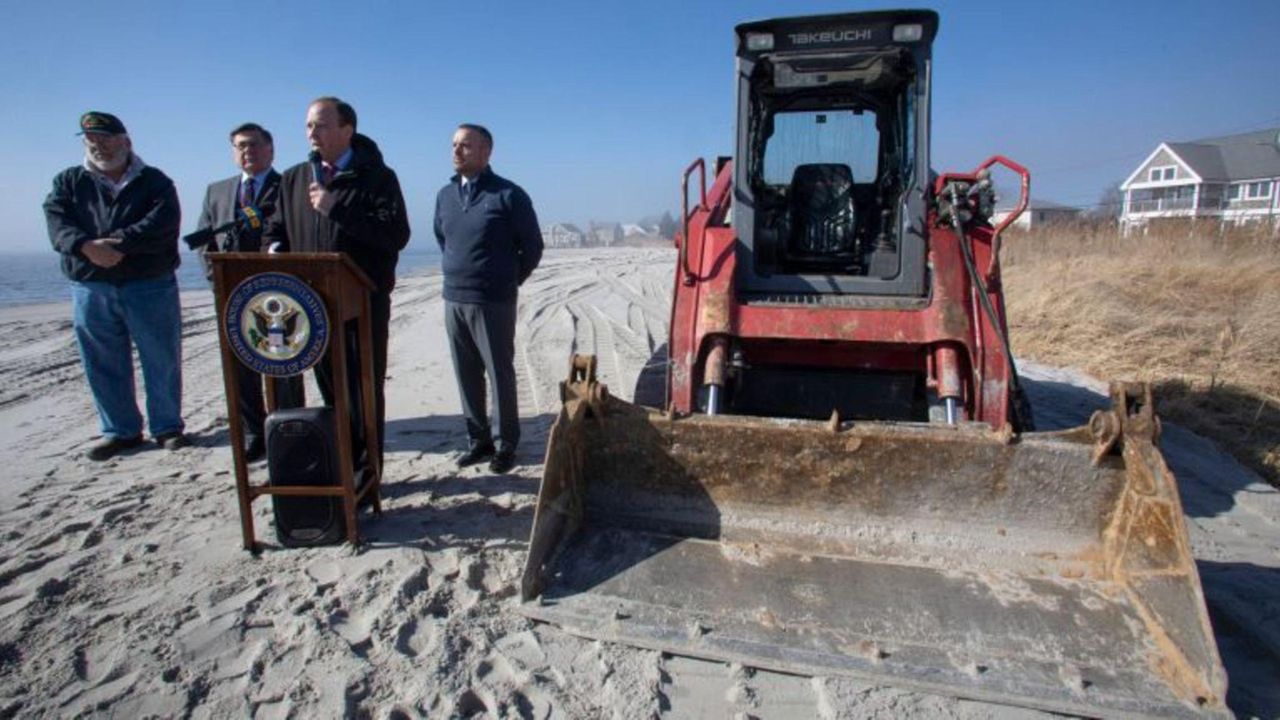 The project restored six-foot depth to about 2.7 miles of the waterway in Moriches Bay.

“The shoaling was so bad,” Rep. Lee Zeldin (R-Shirley) said Monday during a news conference at Webby Beach in Center Moriches. “Experienced boaters in the channel were running aground and hitting sandbars.”

Roughly 70,000 cubic yards of material were removed from the waterway with sand from the dredge being placed at Webby and Great Gun beaches to combat erosion, federal officials said.

Zeldin was flanked at the beach Monday by Brookhaven Town Supervisor Edward P. Romaine and other town officials.

Romaine, who lives in Center Moriches and grew up swimming at Webby Beach, said the added sand should help alleviate flooding, especially on Laura Lee Drive, which overflows during heavy rainstorms.

“I’ve never seen the beach so protected,” Romaine said. “We know Mother Nature will erode it again, but at least we’ve built it up and protected the street from flooding.”

With the shoaling removed, boating officials say recreational and commercial boaters can safely navigate through the waterway.

“We had a bad reputation of being a dangerous area,” which kept people away and hurt transient businesses selling fish bait and other supplies, said Conrad Kreuter, a board member with the Association of Marine Industries, which represents more than  100 marinas on Long Island.

He said he worked with Army Corps of Engineers on the waterway project in addition to the emergency dredge of the inlet, which removed 120,000 cubic yards of sand clogging access to the Atlantic Ocean.

Zeldin on Monday said the funding totaling $15.2 million for both projects came from a pot of money the federal government allocated to the Army Corps for its fiscal 2018 work plan.

Last year, House and Senate lawmakers announced funding for both projects. Among those who fought for the funding was Senate Minority Leader Chuck Schumer (D-N.Y.), who also held conversations with the Army Corps over the dredging work.

“With the completion of the emergency dredging of Moriches Inlet and the Intracoastal Waterway now complete, it should be fair winds and following seas for local fisherman, boaters, businesses and first responders,” Schumer said in a statement.