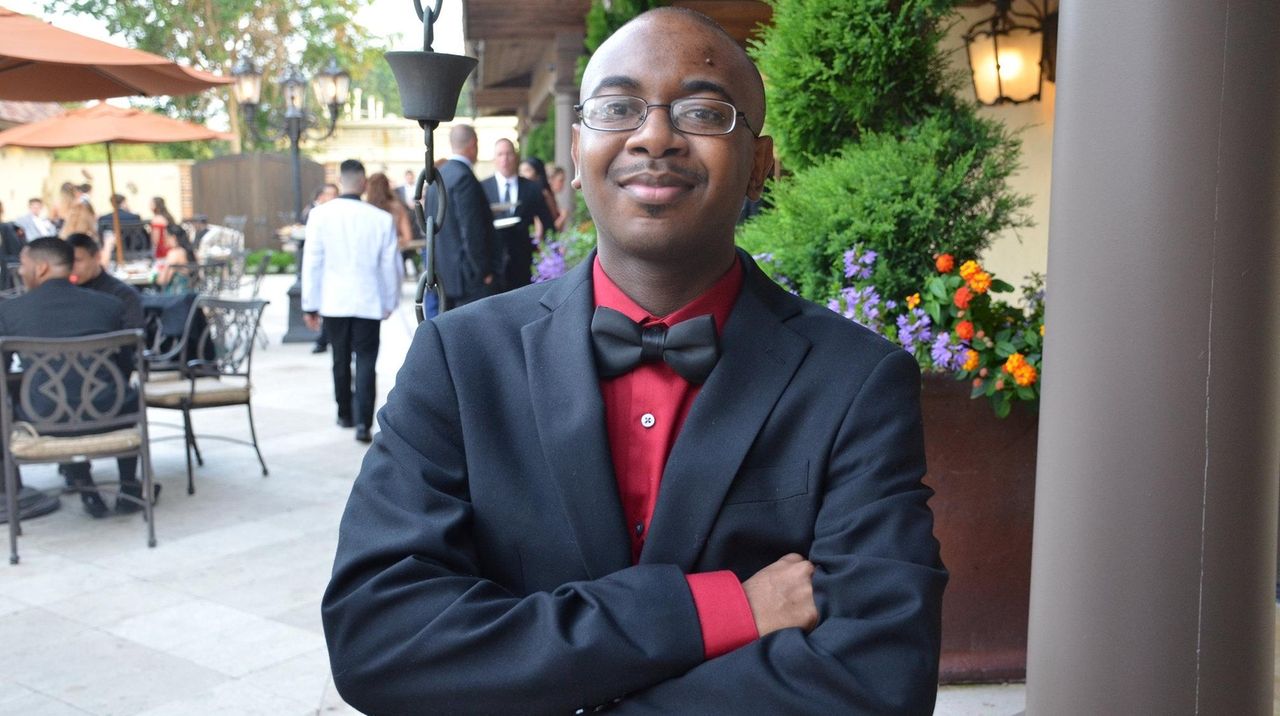 Malik Ellis, 19, an Islip High School senior, was crowned prom king on Tuesday at Larkfield in East Northport. Malik was born with a rare disorder called Prune Belly syndrome, and has had two kidney transplants as a result.  Credit: Newsday / Erin Serpico

Six months ago, Malik Ellis’ family and classmates weren't sure what the end of his senior year would look like.

The 19-year-old Islip High School student needed a kidney transplant and was out of school for five months this year because of it.

In December, he had transplant surgery. In March, he returned to school. And on June 25, Malik was crowned senior prom king.

“I’m so excited,” Malik said, beaming and gasping from the dance floor at the Larkfield in East Northport as classmates picked him up and high-fived him. The room erupted in cheers when his name was called, and Malik jumped for joy and intermittently put his hands over his mouth, as if he was in shock.

Earlier in the night, he said he couldn't believe it when he heard he was nominated for the title.

“They made an announcement [at school],“ he said. “I was like, 'Oh my gosh, this is so not happening right now.'”

Malik showing strength in overcoming obstacles started long before his senior year. He was born with Prune Belly syndrome, a rare disorder marked by the absence or weakness of abdominal muscles, which caused his kidneys to fail. Eight years ago, he received a kidney transplant from his sister, Toniann Briscoe, and had a subsequent series of complications.

He needed another transplant, and during his final year at Islip High School, he had gotten very sick and was on dialysis while hoping for a kidney donation. The school held a Prune Belly syndrome awareness day, did a fundraiser for him and the cause, and made a video to advocate for him to get a kidney donation.

Finally, the family got the call that he would have the transplant on Dec. 8 at NewYork Presbyterian Hospital/Columbia University Medical Center in Manhattan.

After the transplant, Malik needed time to recover and was temporarily home-schooled. But he kept up with his assignments and finished up all of his classwork, he said.

“I was very impressed with myself,” Malik said, adding that he now feels great. “I was very positive that I was going to be coming back to school.”

Michael J. Mosca, Islip High School's principal, said Malik’s spirit and fight has made the rest of the class rally behind him.

“He’s really become just a symbol of this class. His perseverance, his kindness, he’s one of the most kindhearted people you’ll ever meet,” Mosca said.

“When he came back, you can feel the energy come back into the building,” Mosca added. “He had that much of an impact on the entire building. He brings it everywhere he goes — you can just see everyone light up around him.”

Malik and his family have had close relationships with his teachers and administrators, many of whom have supported them throughout Malik's journey. Renee Clock, a business and special education teacher and a work-based learning coordinator, said she spent a night in the hospital holding Malik’s mom’s hand.

“He’s like a son to me,” she said at the prom. “This is a little emotional for me, after graduation. He’s not going to be in Islip everyday.”

Malik's mom said she's particularly thankful for the “amazing” support from the entire Islip community and school community, “from janitors to security guards,” she said. It’s bittersweet for his school experience to be ending, she added.

“Everyone played a role in Malik’s life,” said Paul, who tells Malik every day that he's here for a reason.

“I’m definitely here for a reason,” Malik said before the prom. “I’m very positive, people seem to have positive vibes around me.”

Malik will go to Suffolk Community College next year. He has a passion for trains and wants to be a train operator and service planner.

Instead of a king’s crown, his teachers gave him with a train conductor hat fit for a king.