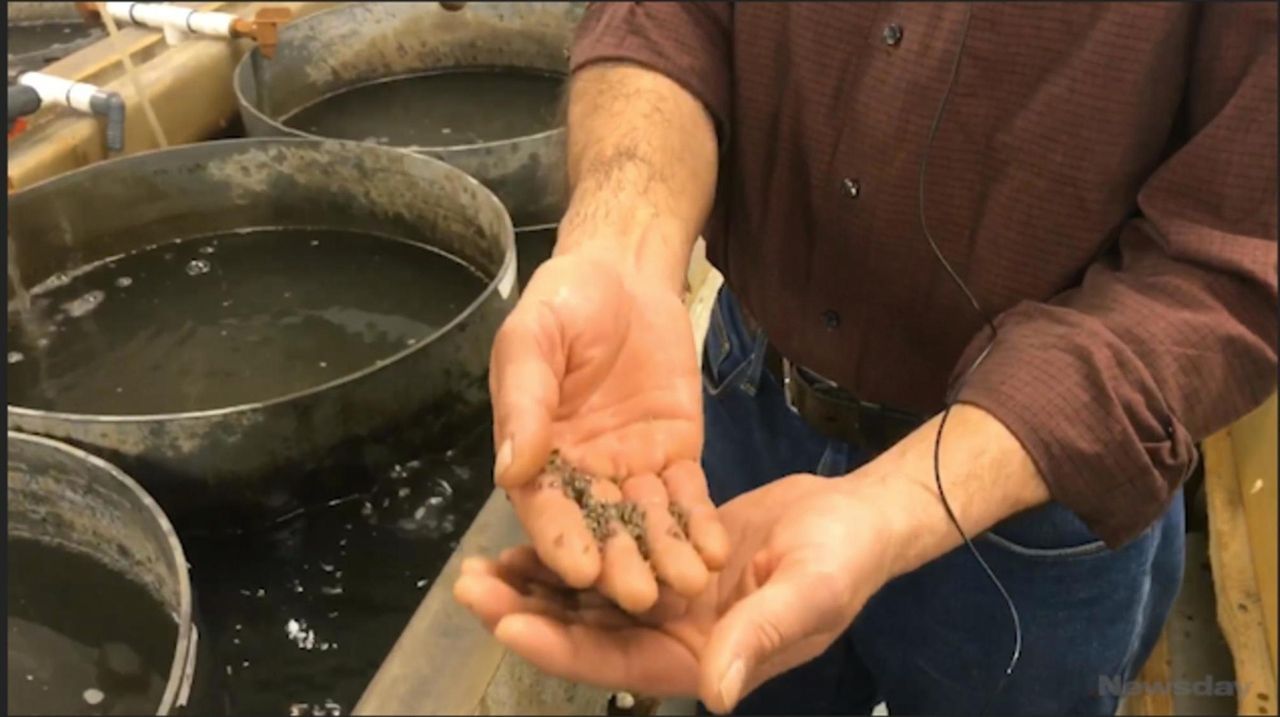 Sixto Portilla, scientist and teacher at Great Atlantic Shellfish Farm in East Islip, discusses a class for would-be shellfish farmers on April 16 that will cover the history of the industry on Long Island and guide students on a 16-month journey during which they will raise their own oysters.  Credit: Newsday / Valerie Bauman

Armed with a notebook and a thermometer, wannabe shellfish farmers will have the opportunity to grow their own oysters and help repopulate the Great South Bay through a series of classes offered at Islip’s Great Atlantic Shellfish Farm.

The classes are returning on May 7 after a yearlong break in the program, which started in 2016.

Students “will be monitoring their oysters like a scientist or a farmer,” said Sixto Portilla, the scientist and teacher who will lead the classes. “They’re going to be taking notes on the temperature of the water. They’re going to monitor the growth of their oysters, they will be able to look at the plankton under a microscope and, of course, they’ll be maintaining and cleaning their equipment.”

The Great South Bay’s clam population was overharvested during the period between the 1950s and the 1970s, and the natural oyster population was depleted during two successive hurricanes in 1931 and 1938, Portilla said.

Town officials, in partnership with Great Atlantic, are trying to repopulate the bay bottom through a town-sponsored program. The classes are an informal extension of that effort and a way to get more residents engaged in aquaculture, said Doug Winter, owner of Great Atlantic.

“Years and years ago there were thousands of people working the bay,” he said. “It doesn’t mean that 15 years from now it can’t change . . . You just need a lot of positive energy to make it happen.”

Leadership at the farm, which operates as a public-private partnership with the town, sought to create a setting where they can educate the public on an industry that has centuries of history in the region.

“It’s important to talk about history so that we have a baseline reference point of the local ecology before the natural resource was exploited beyond its sustainable capacity,” Winter said.

The classes will start with two Monday sessions at the American Legion Hall in Islip, which will cover the history of the industry and an introduction to oyster farming. A third class, yet to be scheduled, will consist of a trip to the hatchery, where students will get an interactive tour of the lab where algae is grown to feed oysters and clams — and they’ll meet their own oysters for the first time.

Each student will receive 500 baby oysters — each about 10 weeks old and roughly a quarter-inch in size.

From there, students will be responsible for caring for their oysters and monitoring environmental conditions at their own pace over the next 16 months with oversight and assistance from Portilla and Great Atlantic staff.

Students will be expected to keep a journal on their oysters’ progress and the water conditions.

“During the growing season they’ll be here and monitoring them on a regular basis, until sometime in October or November [depending on the temperatures] when they will sink their bags,” Portilla said, adding that oysters go dormant when temperatures drop below 40 degrees.

The oysters will be ready by April 2019 to be taken out to the field growing site that the hatchery has set aside for them, he said.