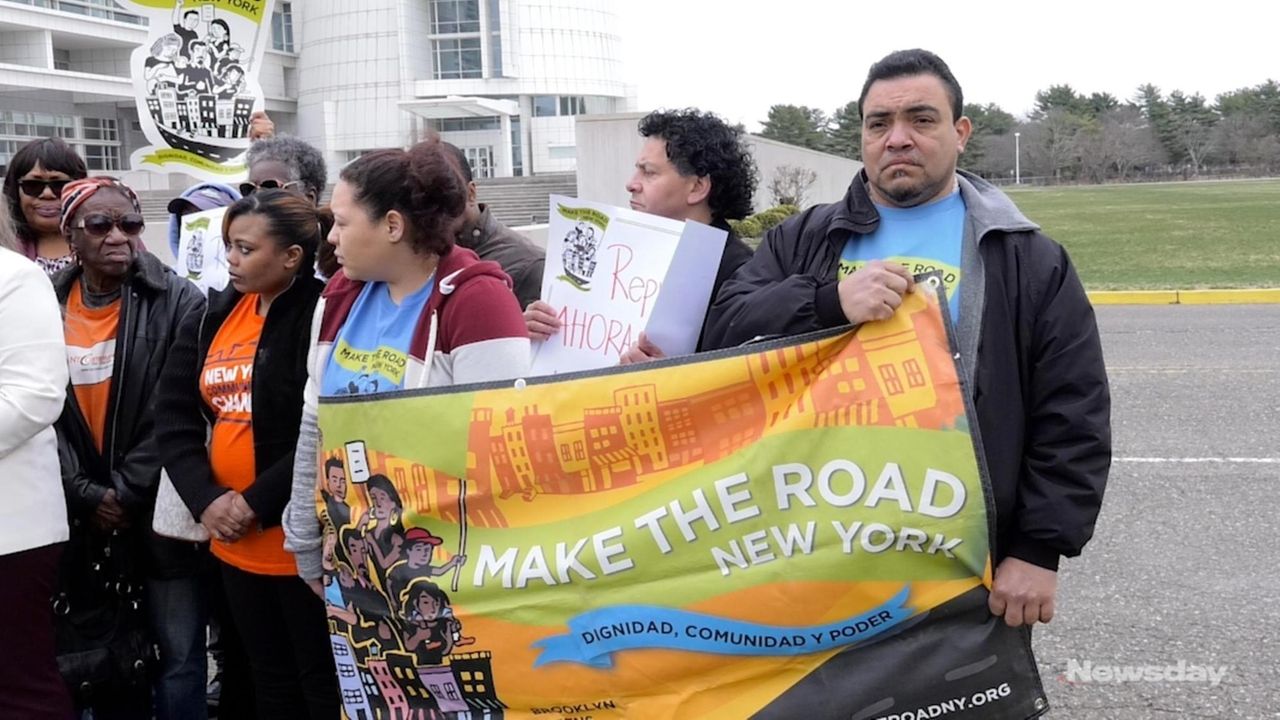 On Tuesday, the Long Island director for New York Communities for Change, Lucas Sanchez, spoke at a news conference outside the federal courthouse in Central Islip about a lawsuit alleging that Islip Town's at-large voting system violates the voting rights of Latinos and keeps them from holding power in the town. Credit: Newsday / John Paraskevas

The fate of Islip Town elections this year was essentially put on trial Tuesday as a group of Brentwood residents sought to change a voting system they say prevents Latinos from having equal representation in Town Hall.

Attorneys for six plaintiffs asked a federal judge in Central Islip to require upcoming town board elections be voted on by councilmanic district. But defense attorneys say that request would deny both Latinos and other residents their right to vote so close to the election.

The plaintiffs are seeking  a preliminary injunction to change elections from being held at-large — in which candidates are selected by a townwide majority — before their lawsuit against the town and Suffolk Board of Elections has gone to trial. That lawsuit was filed in June, alleging the at-large system dilutes the votes of the Latino population.

The lack of political power has led to discrimination and substandard services for Latinos in Brentwood, Central Islip and North Bay Shore, the plaintiffs said.

"The very, very sole issue is, is this election going to go on, or is there discrimination against the Latino population?" U.S. District Court Judge Arthur Spatt said Tuesday, the first day of the hearing, which is expected to last a week.

The plaintiffs — Ana Flores; her father, René Flores; María Magdalena Hernández; Magali Roman; and advocacy groups Make the Road New York and New York Communities for Change — are seeking to create at least one voting district in which Latinos are the majority. Their initial request for a preliminary injunction, filed last month, asked to halt town elections until the case was decided.

Fred Brewington, one of 15 attorneys representing the plaintiffs, noted that while Latinos are about a third of the town population, none have ever been elected to town office.

“This exclusion of Latino voices from all levels of town government is pervasive,” Brewington said, “and the absence is startling.”

But Michael Carvin, one of nine attorneys representing the town, said changing the voting system so close to the June primary and November election would cause voter confusion, especially because a system for creating districts would be “cobbled together.”

The Latino community in Islip is “at the cusp of winning town elections” under an at-large system because of future population projections, Carvin said. Yet Latinos could potentially only get one board seat under a district system, he said. “They don’t want to compete for the vote,” he said. “They want a safe haven.”

Daniel Furshpan,  of the Suffolk County Department of Law, representing the Board of Elections and the town, said, “To stop the election is to create chaos at the ballots and disrupt the democratic process.”

Five town government positions are up for election in November: supervisor, clerk, receiver of taxes and two council members.

Election season is already underway, and major party candidates have filed their petitions already, defense attorneys said. A list of all candidates was not available Tuesday because individuals still have to file their petitions, the board of elections said.

The only witness called so far, Walter Barrientos Perez, the former Long Island coordinator for plaintiff group Make the Road, discussed a wide range of concerns by Islip Latinos, including police discrimination, dumping at Roberto Clemente Park in Brentwood, and a lack of Spanish translation services at Town Hall.

The hearing will continue at 9:30 a.m. Wednesday.